However, many tumors respond poorly or even non-responsively to ICIs, in part due to a lack of tumor-infiltrating lymphocytes ( TILs ), which greatly limits the application of ICIs.

Transforming these immune “cold” tumors into “hot” tumors that may respond to ICIs is an unsolved problem in cancer immunotherapy.

Since anti-apoptosis is a pervasive feature of cancer, induction of non-apoptotic regulated cell death ( RCD ) is a novel cancer treatment strategy.

According to different morphological, biochemical, immunological and genetic features, RCD can be divided into two categories: apoptotic and non-apoptotic. Non-apoptotic RCD can be subdivided into autophagy , ferroptosis, pyroptosis, and necroptosis .

Recently, several studies have revealed the interaction between non-apoptotic RCD and antitumor immunity, and targeted therapy against autophagy, ferroptosis, pyroptosis and necroptosis combined with immunotherapy may exert powerful antitumor activity, Even tumors resistant to ICIs.

Therefore, it is necessary to gain an in-depth understanding of the multi-layered relationship between anti-tumor immunity and non-apoptotic RCD, as well as the potential targeted application of non-apoptotic RCD in improving the efficacy of immunotherapy in malignant tumors.

Autophagy is a regulatory mechanism that removes unnecessary or dysfunctional cellular components and recycles metabolic substrates.

In response to stress signals in the tumor microenvironment, autophagy pathways are altered in tumor cells and immune cells, resulting in differential effects on tumor progression, immunity, and therapy.

In the TME, autophagy in tumor cells can be induced by intracellular and extracellular stress signals, including metabolic stress, hypoxia, redox stress, and immune signals. ( For details, see Autophagy in Tumor Immunity and Therapy ) 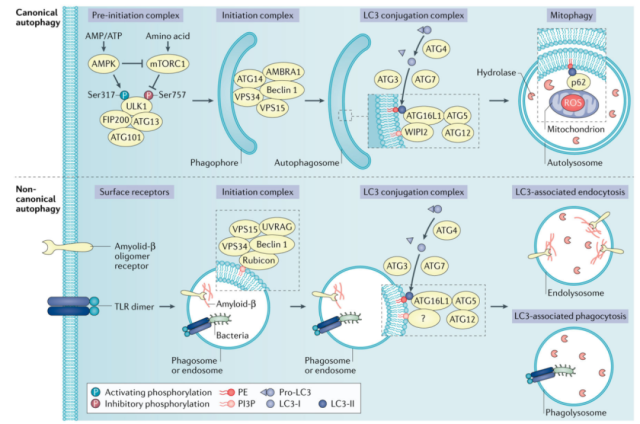 It has been found that the downregulation of MHC class I molecules in pancreatic ductal adenocarcinoma ( PDAC ) is mediated through selective autophagic degradation, and inhibition of autophagy releases a strong antitumor immune response.

On the other hand, MDSCs play an immunosuppressive role in TME, and studies have shown that autophagy in MDSCs is a key mechanism for suppressing the antitumor immune activity of melanoma.

Autophagy in MDSC immune cells is central to the degradation of MHC class II molecules, preventing the initiation and activation of antitumor T cells.

Furthermore, autophagy, as a mechanism by which ( cancer ) cells respond to threatening stressors, is considered an important mechanism of therapy resistance in cancer therapy.

There is already evidence that the resistance of tumor cells to cisplatin is mediated, at least in part, by increased autophagy in ovarian cancer cell lines.

However, in clinical trials, HCQ monotherapy failed to control tumor growth in patients with advanced pancreatic cancer, and autophagy inhibition is currently combined with other cancer treatments to improve the therapeutic effect.

High autophagic flux in cancer is associated with reduced response to chemotherapy and with poor survival in cancer patients.

Preclinical studies have shown that inhibition of autophagy can overcome chemoresistance in NSCLC, bladder, thyroid, and pancreatic cancers.

In addition, results from some studies suggest that autophagy inhibition may synergize with inhibition of MEK–ERK signaling.

An early phase II study in 2014 used HCQ monotherapy in patients with metastatic pancreatic cancer who had previously been treated with other modalities, with a primary endpoint of two-month progression-free survival.

As a result, autophagy levels were reduced to varying degrees in different patients, but the primary endpoint was not significantly improved.

Another study combining HCQ, gemcitabine, and nab-paclitaxel in patients with advanced or metastatic pancreatic cancer also failed to demonstrate a 12-month extension of overall survival.

Short-term inhibition of autophagy at the same time as radiotherapy enhances the cytotoxicity of radiotherapy against drug-resistant cancer cells. Likewise, hypoxia enhanced the radioresistance of A549 lung cancer cells by inducing autophagy.

Therefore, targeting tumor autophagy may enhance the efficacy of radiotherapy. In fact, autophagy inhibitors combined with radiation therapy have been utilized in clinical trials in cancer patients.

Harnessing the immune system is an important way to fight cancer. Inhibition of autophagy may impair systemic immunity, as autophagy is involved in immune system development and effector T cell survival and function.

However, in preclinical models of melanoma and breast cancer, systemic inhibition of autophagy by CQ over a short period of time did not impair T cell function.

The data suggest that the immune system may be tolerant to some degree of autophagy inhibition.

Therefore, targeting autophagy may enhance immunotherapy. Clinical trials of HCQ combined with immunotherapy in patients with different types of cancer are currently underway.

Overall, the potential of inhibiting autophagy to enhance the efficacy of immunotherapy is a promising area that is constantly being explored.

Ferroptosis is a recently discovered programmed cell death that plays an important role in tumor biology and therapy.

In addition, ferroptosis is also considered to be related to T cell-mediated antitumor immunity and affects the efficacy of tumor immunotherapy.

It was recently found that ferroptosis contributes to the antitumor effect of CD8+ T cells and affects the efficacy of anti-PD-1/PD-L1 immunotherapy.

Immunotherapy combined with ferroptosis-promoting modalities, such as radiation therapy and targeted therapy, can have a synergistic effect through ferroptosis to promote tumor control.

Combination of immunotherapy and cystine restriction

Recently, it has been reported that CD8+ T cells activated by anti-PD-L1 immunotherapy promote tumor cell ferroptosis by secreting IFN-γ after PD-L1 blockade.

A recent study showed that resistance to anti-PD-L1 therapy can be overcome by combination with a TYR03 receptor tyrosine kinase (RTK) inhibitor, which promotes ferroptosis. Increased expression of TYR03 was found in anti-PD-1-resistant tumors.

In a syngeneic mouse model of TNBC, inhibition of TYR03 promoted ferroptosis and sensitized tumors to anti-PD-1 therapy.

This study reveals that abolishing ferroptosis by using TYR03 inhibitors is an effective strategy to overcome immunotherapy resistance.

Recent evidence suggests that the synergistic effect of radiotherapy and immunotherapy is associated with increased susceptibility to ferroptosis.

Radiation has been shown to induce ferroptosis, and genetic and biochemical signatures of ferroptosis have been observed in radiation-treated cancer cells.

Therefore, the antitumor effect of radiotherapy can be attributed not only to DNA damage-induced cell death but also to the induction of ferroptosis.

These studies reveal ferroptosis as a novel mechanism by which immunotherapy and radiation work synergistically.

Similar to cancer cells, ACSL4 is also essential for ferroptosis of CD8+ T cells and their immune function.

These findings reveal that CD8+ T cell ferroptosis is a novel mode of tumor immunosuppression and underscore the therapeutic potential of blocking CD36 to enhance anti-tumor immunity.

Notably, this study also suggests that GPX4 plays a role in regulating the antitumor function of CD8+ TILs.

Therefore, therapeutic induction of ferroptosis in cancer cells by GPX4 inhibitors may have unwanted on-target effects on T cells and produce undesirable toxicity.

Pyroptosis was first described in macrophages infected with S. typhurium and S. flexneri in the 1990s .

Although initially thought to be an apoptotic process, further studies have shown that this bacterial-induced cell death is critically dependent on caspase-1.

Pyroptotic cells share some features with apoptotic cells, such as chromatin condensation and DNA fragmentation, but can be distinguished by their intact nucleus, pore formation, cell swelling, and osmotic lysis.

These same cysteine ​​proteases may also directly or indirectly promote the maturation of pro-inflammatory cytokines that, together with DAMPs, initiate or sustain inflammatory responses when released.

Although the number of known pyroptotic pathways is likely to increase in the future, two main pathways and several alternative pathways have been elucidated.

Among the alternative pathways, the one that has received the most attention is GSDME-induced pyroptosis via caspase-3. ( For details , see Tumor Immunity and Pyroptosis ) 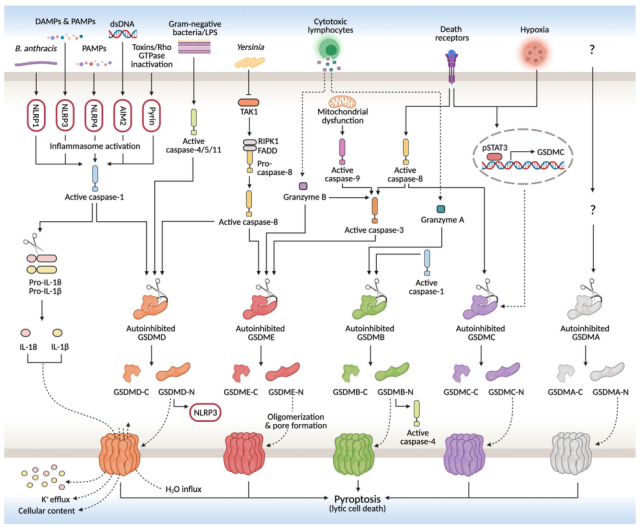 Unlike apoptosis, which is essentially a process of immune tolerance, pyroptosis has a molecular mechanism that induces a strong inflammatory response and is considered a form of ICD in some cases.

Although the link between pyroptosis and anticancer immunity is unclear, an increasing number of studies suggest that pyroptosis-mediated tumor clearance is achieved by enhancing immune activation and function. 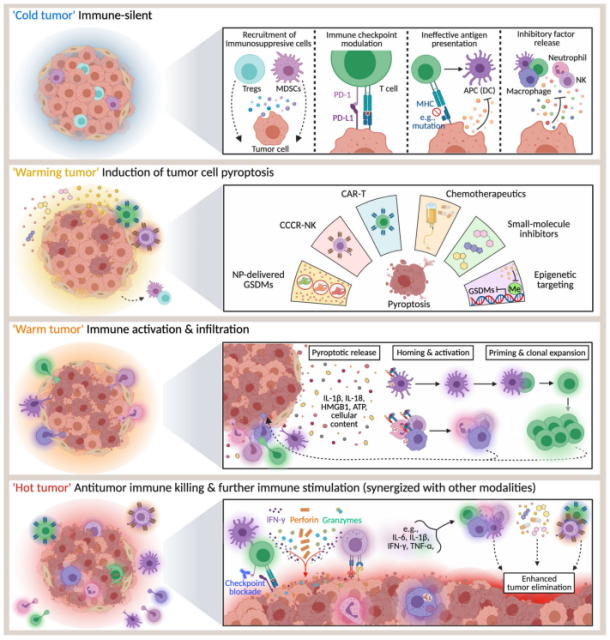 Furthermore, when this methotrexate TMP delivery system was infused into the bile duct lumen of extrahepatic CCA patients, neutrophil activation and remission of biliary obstruction were observed in 25% of patients.

In addition, GSDME-mediated pyroptosis was also found to cause immune cell infiltration/activation in melanoma through a combination of BRAF and MEK inhibitors and lead to melanoma regression.

In another strategy, metformin, the most commonly used drug for the treatment of type 2 diabetes, can inhibit cancer cell proliferation by indirectly activating pyroptosis through caspase-3.

A series of small-molecule inhibitors targeting KRAS, EGFR, or ALK mutant lung cancers have also been found to induce pyroptosis through caspase-3-mediated GSDME cleavage after activation of the intrinsic mitochondrial apoptotic pathway.

Thus, following RIG-1 activation in mice, a reduction in breast cancer metastasis and tumor growth was accompanied by an increase in tumor lymphocytes.

Another major obstacle faced by nearly all anticancer immunotherapy strategies is the dysregulation of the immunosuppressive tumor microenvironment.

In addition, more and more exciting research reports show that pyroptosis induction synergizes with PD-1 inhibitors to turn tumors from “cold” to “hot”, indicating the great potential of this combination.

Necroptosis, proposed by Deggerev et al in 2005, is another form of ICD that includes specific death receptors ( DRs ) such as FAS and tumor necrosis factor receptor 1 ( TNFR1 ) or toll-like receptor 3 ( TLR3 ) ) and other PRRs recognize unfavorable signals from the intracellular and extracellular microenvironments, thereby triggering necroptosis.

There is evidence that necroptosis acts as a tumor suppressor in most cases.

In a study of more than 60 cancer cell lines, two-thirds of the samples showed reduced levels of RIPK3, suggesting that cancer cells tend to escape necroptosis to survive.

In addition, necroptosis is closely related to cancer prognosis, and RIPK3 expression is an independent prognostic factor for overall survival and disease-free survival in colorectal cancer patients.

Recently, a study showed that the expression of RIPK1, RIPK3 and MLKL was associated with better overall survival in patients with liver cancer.

Effectors in necroptosis such as RIPK1 and RIPK3 can directly regulate immune cell function independent of cell death.

Necroptosis inducers can synergize with ICIs against tumors.

In addition, SMAC analogs are also believed to improve the efficacy of CAR-T cells in the treatment of acute lymphoblastic leukemia, since death receptor signaling is a key mediator of CAR-T cell cytotoxicity.

The study of non-apoptotic RCDs is a broad and rapidly developing field.

A new view is that targeting autophagy, pyroptosis, ferroptosis, and necroptosis in local tumors profoundly affects immune cells infiltrating the TME and the response to immunotherapy.

Although the roles of autophagy, pyroptosis, ferroptosis, and necroptosis in tumor immunity remain unclear, several findings suggest more complex interactions between non-apoptotic RCDs and immunity in different tumor types and contexts , but targeting non-apoptotic cell death has increasingly emerged as a promising strategy to improve the efficacy of cancer immunotherapy.

Currently, it is imperative to develop more specific cell death-inducing drugs that act on tumor cells with minimal side effects on normal tissues.

At the same time, preclinical testing of these drugs in combination with ICIs, as well as chemotherapy, radiotherapy, and targeted therapy, may be critical in balancing treatment goals with possible adverse effects.

In the future, clinical trials of combined therapy should be actively encouraged to evaluate its efficacy and safety, and provide more references for subsequent in-depth research to benefit more cancer patients.