Iron death has worked: Patients healed on their own After suffering deadly brain tumors

Iron death has worked: Patients healed on their own After suffering deadly brain tumor.

Neuroblastoma has extensive clinical heterogeneity, most of which show malignant characteristics such as high metastasis and easy recurrence, while a few can regress into benign tumors without any treatment at all, or even completely disappear.

MYC gene is a group of common oncogenes (divided into C-MYC, N-MYC, L-MYC) , and many cancers promote the uncontrolled growth and proliferation of cancer cells due to the abnormal expression of MYC as a transcription factor.

Neuroblastoma is a typical MYC-driven cancer, and patients with neuroblastoma often develop massive amplification of the N-MYC gene (MYCN) , which causes the cancer cells to grow out of control.

However, there are also a considerable number of neuroblastoma patients with high MYCN expression, especially infants and young children under 18 months, who have spontaneous tumor regression even when the tumor has metastasized. The mechanism behind this, still a mystery.

Recently, a research team from Heidelberg University in Germany and the German Cancer Research Center published a research paper entitled: MYCN mediates cysteine ​​addiction and sensitizes neuroblastoma to ferroptosis in Nature Cancer , a sub-journal of Nature .

This study shows that MYCN-amplified neuroblastoma is highly cysteine-dependent and sensitive to ferroptosis, and blocking cysteine ​​can promote ferroptosis in cancer cells and significantly inhibit tumor growth.

The study also explains why a subset of infants and young children with neuroblastoma heal spontaneously without treatment — when cancer cells divide rapidly, they deplete cysteine ​​and trigger ferroptosis, which clears the cancer cells. 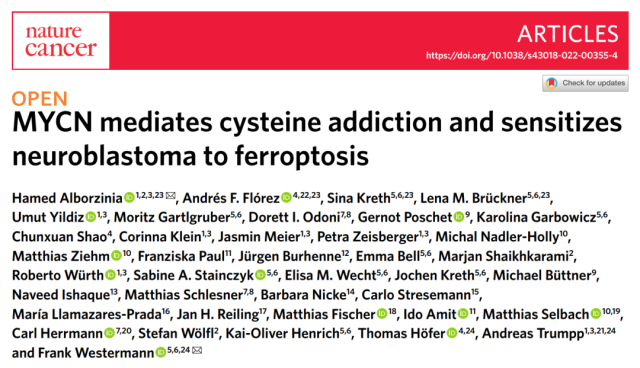 It is well known that during the development of multicellular organisms, there are a variety of predetermined and precisely controlled programmed cell death , such as apoptosis (Apoptosis) , programmed necrosis (Necroptosis) , cell pyroptosis (Pyroptosis) , and iron . Death (Ferroptosis) , etc.

Ferroptosis is a novel iron-dependent programmed cell death method discovered by the laboratory of Brent. R. Stockwell of Columbia University in 2012.

It is induced by excessive accumulation of peroxidized lipids . Its morphological characteristics, effects The manner and molecular mechanism are very different from other programmed death methods.

At the same time, there are multiple defense pathways against ferroptosis in cells, the most important one of which is mediated by glutathione peroxidase 4 (GPX4) , which is specifically catalyzed by glutathione (GSH) . Oxidation of lipids to inhibit the occurrence of ferroptosis.

Cancer cells are strongly dependent on certain amino acids due to their strong metabolic demands.

Cysteine, an amino acid , is strongly dependent , and deprivation of cysteine ​​leads to massive death of MYCN-expressing cancer cells.

On the other hand , neuroblastoma cells with high expression of MYCN can induce a large amount of lipid peroxidation when consuming cysteine ​​(cysteine) , and at the same time, because cysteine ​​is the rate-limiting rate of glutathione (GSH) biosynthesis amino acids, this induces ferroptosis and limits the ferroptosis inhibitory pathway, thereby causing cells to be sensitized to ferroptosis.

Therefore, when cysteine ​​uptake is limited, cysteine ​​is used in large quantities for protein synthesis, which triggers ferroptosis.

This suggests that by artificially depriving cysteine, it is possible to induce ferroptosis in neuroblastoma cells with high MYCN expression for cancer therapy.

Neuroblastoma cells with high MYCN expression have a strong demand for cysteine, but restricting the intake of cysteine ​​cannot completely block cysteine, because the intracellular can also be converted from methionine through transsulfation. amino acid to generate cysteine.

The experimental results showed that tumor growth was significantly inhibited. This suggests that simultaneous targeting of multiple ferroptosis-related targets is a promising strategy for the treatment of MYCN – driven tumors . 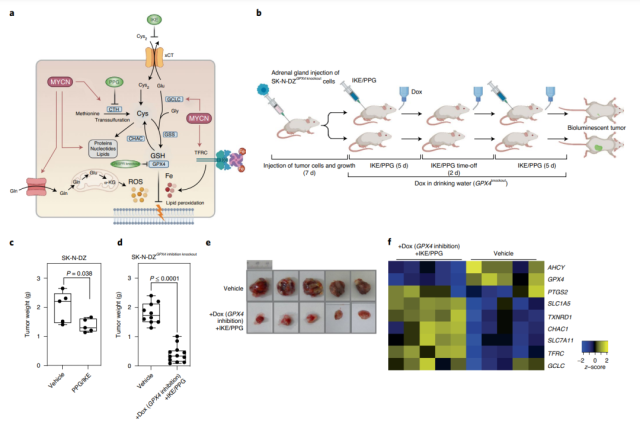 At the same time, the study sheds light on the puzzle that some infants and young children with neuroblastoma heal on their own, says Hamed Alborzinia , lead author of the paper.

For infants and young children, during the first two years of life, the With less cysteine, in neuroblastoma, the uncontrolled division of cancer cells rapidly depletes cysteine, which triggers ferroptosis, causing the tumor to shrink or even disappear completely.

This study demonstrates that triggering ferroptosis significantly inhibits lethal neuroblastoma, suggesting that the MYCN-driven high dependence of tumor cells on cysteine ​​is a new therapeutic avenue that could be exploited to induce ferroptosis in cancer cells die.

Iron death has worked: Patients healed on their own After suffering deadly brain tumor