How to treat brainstem hemorrhage caused by brainstem cavernous hemangioma?

The brainstem includes three main parts: the pons, the midbrain, and the medulla oblongata. It is known as the “forbidden zone of life”. Generally, if the bleeding exceeds 10ml, the mortality rate is close to 100%. There are cases of brainstem hemorrhage cured by surgery at home and abroad. not much.

The rupture of brainstem cavernous hemangioma is a possible cause of brainstem hemorrhage. It is not so much a malformed blood vessel group that grows in the brain stem of the central core of the human brain, but it is an “untime bomb” in the brain, whether it is increased blood pressure, external force, emotional agitation, or severe Exercise, including those who have been diagnosed and have had more than one hemorrhage, even if the patient is in a quiet state or even in a sleep state, fatal brainstem hemorrhage can occur. This bleeding can sometimes be repeated a second or third time, and it may be worse than before.

A 36-year-old woman experienced symptoms such as hypoesthesia on the left side, sensory disturbances in the trigeminal nerve area on both sides, and unstable walking after two brainstem hemorrhages. No one knows when the next bleeding will be and whether it will be life-threatening. The preoperative images (pictures A and B) showed a huge cavernous hemangioma in the brain, the brain fiber bundles were compressed and obviously twisted. After a total resection, no residual cavernous hemangioma was found (Figure C), and the displaced brain fiber bundles were almost completely restored to their natural position (Figure D). Compared with the pre-surgery, the patient thought that the postoperative health status was “very Good”, without any neurological damage, and life resumes as usual. 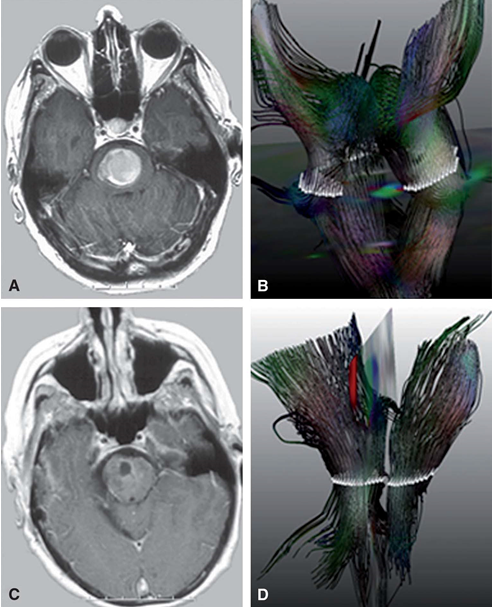 Due to the high density of cranial nerve nuclei and fiber bundles in the brainstem, even a small amount of bleeding may cause severe neurological symptoms. In the above case, the patient caused related symptoms due to brainstem hemorrhage.

German Professor Bad Langfei once pointed out in his paper “Quality of Life After Brainstem Cavernoma Surgery in 71 Patients” that the microsurgery of brainstem cavernoma is increasingly used to treat symptomatic patients. Surgical treatment Not only does it improve neurological symptoms, but it also maintains the patient’s quality of life (QoL). Total surgical resection can achieve a radical cure effect. The goal of surgical efforts is to maximize the function and remove the tumor as much as possible. Choosing the appropriate surgical approach is very important for total tumor resection and functional protection. 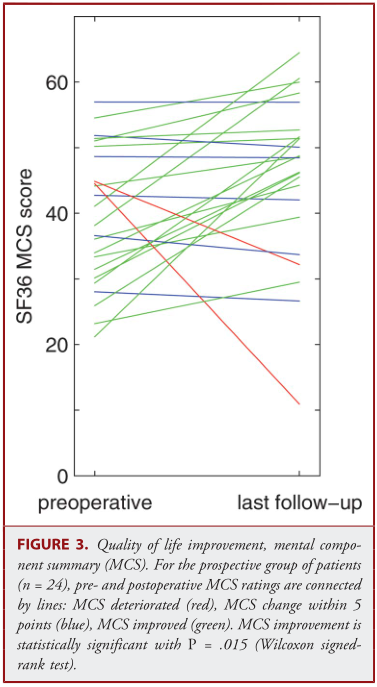 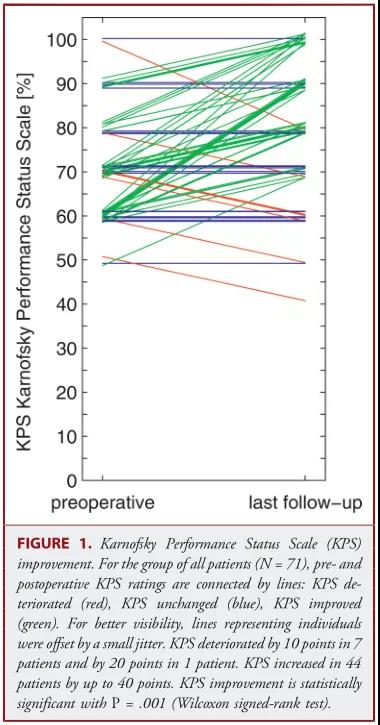 Improvement of Karnofsky Functional Status Scale (KPS). For all patient groups (N = 71), the preoperative and postoperative KPS scores were connected by a line: KPS worsened (red), KPS remained unchanged (blue), and KPS improved (green). For better visibility, the lines representing the individual are offset by small jitter. KPS dropped 7 points by 10 points and 1 point by 20 points. The KPS of 44 patients increased by 40 points. When P = .001 (Wilcoxon symbol), the improvement of KPS is statistically significant.

The paper evaluated the quality of life of 71 patients with brainstem cavernous hemangioma surgery to record the beneficial effects of surgery in most patient groups. These cases are all brainstem cavernous vessels undergoing direct surgical resection from 1996 to 2007 Tumor patients. All operations were performed by Professor Bad Langfei from Germany, and more than 82% of the patients believed that the effect of the operation was extremely beneficial. A series of results support the view that microsurgical removal of brainstem cavernous hemangioma is an effective treatment, which usually brings good clinical results and a significant improvement in neurological function and quality of life.

Under what circumstances should surgery be done?

1. Serious clinical symptoms suggest surgical indications; 2. Accidentally discovered cavernous hemangioma (static, no clinical manifestations, no bleeding) temporarily does not require surgical treatment; 3. Urgent surgical resection in patients with rapid deterioration Tumors are beneficial; 4. There are many surgical approaches that can be selected, but the shortest surgical path to the tumor is not necessarily the best surgical approach; 5. People who have had bleeding and have neurological problems or severe symptoms The patient, who may be bleeding for the second or third time, should undergo surgery.

Postscript: Although brainstem hemorrhage caused by brainstem cavernous hemangioma is very dangerous and can be fatal at any time, when symptoms appear and meet the above-mentioned surgical indications, it is advisable to perform a complete operation as soon as possible, and strive for a cure as much as possible .