Brainstem hemorrhage can be a devastating disease with widespread symptoms. Bleeding may be due to trauma, underlying vascular malformation of stroke, or a series of rare diseases.

CT and MRI have expanded our diagnosis and understanding of this disease. The brainstem is the center of human life.

In 1812, Shane first described brainstem hemorrhage (Xieen 1812) in the pathological study of patients with lethargy and coma.

In 1877, Bode reviewed the findings of 67 patients reported in the literature (Bode 1877). Gore pointed out that loss of consciousness is not a basic feature, and patients often have seizures (Galls 1893).

In 1900, Oppenheimer described the clinical features of pons hemorrhage in detail (Oppenheimer 1905).

A review of the chronological history of brainstem hemorrhage (Thompson and Salman 1988; Haynes and Mollman 1993).

Before the era of CT scans, there were very few reports of extra-pontine brainstem hemorrhage, probably because it was mild and often confused with brainstem infarction.

The clinical and pathological description of midbrain and medullary hemorrhage was described after the introduction of head CT scan.

Even with CT, the detection of Duret bleeding may be limited. CT also enables people to recognize the “benign variants” of brainstem hemorrhage (Shuaib 1991).

The risk of cerebral hemorrhage increases with age. However, brainstem hemorrhage occurs in a younger group of patients, and patients with a very high incidence occur between the ages of 40 and 60.

The underlying mechanism of bleeding is secondary to vascular injury, very common is hypertension (Dinsdale 1964). Bleeding causes severe damage to the brainstem and often has a severe prognosis (Chen et al 2019). Young people may bleed without high blood pressure. Such lesions are usually secondary to vascular malformations (Mangiardi and Epstein 1988).

The hematoma is usually small and produces a milder defect. In many patients with this vascular disease, surgical removal of the hematoma may lead to early improvement (Mangiardi and Epstein 1988; Stea et al., 1994). Surgical resection can prevent recurrence. A small amount of bleeding may be secondary to lacunar disease (type II lacunar) (Challa and Moody 1989).

The clinical presentation of these patients is similar to brainstem ischemic lacuna involvement (Challa and Moody 1989). Brainstem hemorrhage, arranged by frequency, is seen in the pons, midbrain, and medulla.

Vascular malformations, mainly cavernous hemangioma and arteriovenous malformations (AVMs), can be a secondary cause of brainstem hemorrhage.

How to treat brainstem hemorrhage? Surgery is the first-line treatment for patients with hemangioma

15 patients were examined by angiography, MRI or ct angiography to rule out vascular malformations. Eleven patients needed extraventricular drainage due to occlusive hydrocephalus. Four patients with cavernous hemangioma and one patient with arteriovenous malformations underwent surgical resection of the lesion.

The clinical symptoms of 2 patients improved, and the neurological condition did not deteriorate during follow-up inspection. Two patients, one with AVM and the other with cavernous hemangioma, received radiosurgery treatment. The remaining patients are treated conservatively.

All patients in this group had residual neurological deficits; at the time this report was released, 8 people had died. Conclusion: For patients with hemangioma, surgical treatment is the first-line treatment.

The symptoms of hemangioma are the deterioration of the nervous system and surface damage.

Regarding this question, as the current chairman of the Education Committee of the World Federation of Neurosurgery (WFNS), a founding member of the World School of Neurosurgery, the editor-in-chief of Neurosurgical Review, the largest journal of neurosurgery in Europe, and Professor Bad Langfei of Germany once said: I know a sponge It has been almost 30 years for patients with hemangioma. He had a bleeding about 30 years ago, and since then, there has been no second bleeding.

For this situation, we will not choose surgery. But what I would recommend for surgery is that all patients with bleeding and neurological problems or severe symptoms may have their second or third bleeding.

If the patient has a brainstem hemorrhage not long ago, can he or she be operated on? Or do I need to wait for a while before the operation?

Professor Batronfi said: Early surgery is better for patients. The earlier the operation, the better for the patient after bleeding. Of course, it depends on the specific situation, the size of the bleeding and the patient’s neurological condition.

But waiting, as sometimes recommended by many doctors, is not good, because after a long period of waiting, after the initial bleeding, a local scar will form, and the formation of this scar actually hinders a good operation.

This makes the operation more difficult, more dangerous, and sometimes prevents complete removal of the lesion. Another important factor is that in the early stages of bleeding, the bleeding is still more or less a fluid.

So when we open the brainstem in the bleeding area through surgery, the blood can be flushed out, which is very useful in surgery. If we wait a few weeks, the blood will clot, become more stiff and harder to clear.

A case of 6 brainstem hemorrhages by Professor Batronfi

Medical history: Ms. Huang, aged 50+, with limb weakness, facial numbness, dysarthria, a history of brainstem cavernous hemangioma for more than 10 years, and a total of 5 brainstem hemorrhages in the past.

Third-degree dying due to bleeding, admitted to ICU for more than 60 days, with a history of hypertension 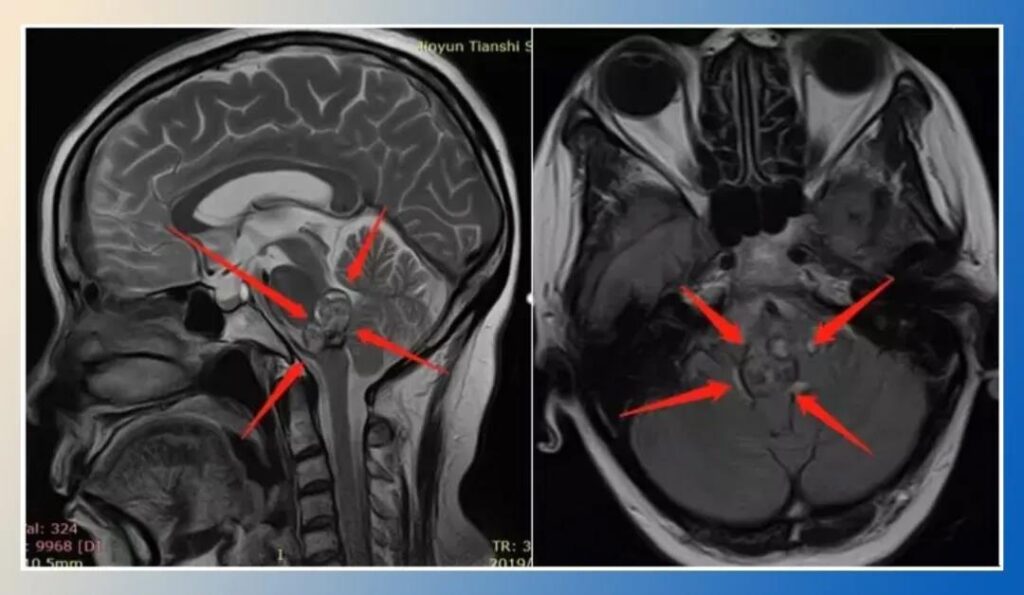 3. Surgical results: The tumor was completely excised under the microscope. The tumor resection took about 1.5 hours, and the operation was smooth.

ICU treatment time: 1 day, can fully breathe independently, remove the cannula on the second day after surgery and transfer out of the ICU ward.

Most of the brainstem hemorrhages have a poor prognosis, and care must be taken in selecting the doctor team.