Advances in endoscopic treatment of choledocholithiasis

Advances in endoscopic treatment of choledocholithiasis. Common bile duct stones (CBDS) is a common biliary disease that can cause abdominal pain, obstructive jaundice, cholangitis and pancreatitis, and even fatal. 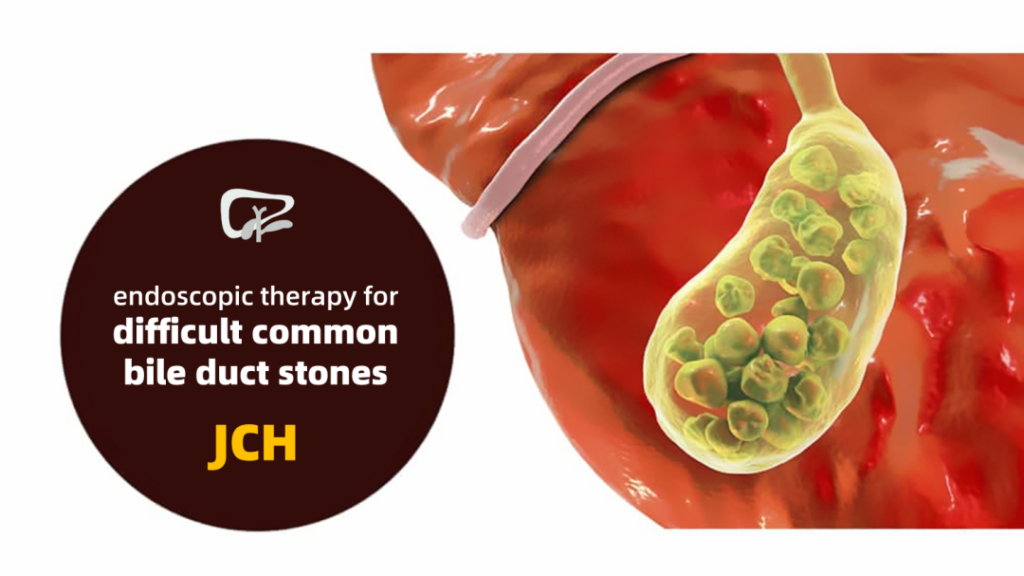 Common bile duct stones (CBDS) is a common biliary disease that can cause abdominal pain, obstructive jaundice, cholangitis and pancreatitis, and even fatal [1]. With the continuous development of equipment and technology, endoscopic treatment has become the preferred treatment for CBDS [2]. Through conventional methods such as endoscopic retrograde cholangiopancreatography (ERCP) and endoscopic sphincterotomy (EST), the success rate of choledocholithotomy can reach 85%~90%, but there is still 10%~15 % Of CBDS are difficult to remove by conventional endoscopic treatment, and these stones are called “difficult CBDS” [3].

There is no accepted strict definition of difficult CBDS in the academic circles. The reasons for the difficulty in CBDS removal mainly include three situations: First, the characteristics of the stones themselves, such as the diameter of the stones> 15 mm, the incarceration of the stones, the large number, the hard texture, and the shape of the stones. Special (barrel or cubic), etc.; second, there are anatomical variations, such as periampullary diverticulum, Roux-en-Y gastrojejunostomy, postoperative anatomy, duodenal stenosis, bile duct stenosis, S-shaped The length of the common bile duct, the distal end of the common bile duct is too short (≤36 mm), the acute angulation of the distal end of the common bile duct (≤135°), etc.; third, the patient has complications and cannot tolerate endoscopic treatment, such as advanced age, bleeding tendency, Is receiving anticoagulation therapy, etc. [4-5]. At present, the difficult CBDS endoscopic treatment for the first case includes endoscopic large balloon dilatation of the nipple (EPLBD), mechanical lithotripsy (ML), oral choledochoscopy (POCS) assisted lithotripsy and extracorporeal shock wave lithotripsy Shi (ESWL), etc., this article summarizes related research progress.

EST is the standard method of expanding the nipple opening before removing CBDS. Endoscopic Balloon Nipple Dilation (EPBD) refers to the technique of dilating the bile duct sphincter with a balloon with a diameter of <10 mm. For patients with small stones without contraindications, EPBD can be used as an alternative therapy for EST; EPLBD evolved from EPBD , Refers to the use of a balloon with a diameter of> 12 mm to expand the bile duct opening. It can be combined with EST or used alone [6-7].

In order to simplify the removal of large or difficult stones and reduce the adverse events caused by EST or EPBD alone, in 2003, Ersoz et al. [8] reported for the first time that small incision EST combined with EPLBD was used to remove large or difficult stones. This method Since then, it has been continuously developed and gradually recognized. It combines the advantages of EST and EPLBD: because of less damage to the sphincter, it can reduce the risk of perforation and bleeding; because the EST small incision separates the bile duct and the pancreatic duct opening, it can reduce the damage of the pancreatic duct during the expansion of the bile duct, and reduce The incidence of postoperative pancreatitis [9].

A number of recent studies have compared the efficacy and safety of EST combined with EPLBD and EPLBD alone in the treatment of larger CBDS, and their conclusions are similar: the two methods are in terms of total stone retrieval success rate, total adverse event rate and ML intervention rate. There is no significant difference, and it is considered unnecessary to perform EST before EPLBD [21-24]. A meta-analysis of 7 RCTs [25] showed that the two therapies had the first treatment success rate (OR=0.69, 95%CI: 0.44~1.09, P=0.11), mechanical lithotripsy rate (OR=1.18, There was no significant difference in 95%CI: 0.68~2.05, P=0.55) and the incidence of postoperative pancreatitis (OR=0.88, 95%CI: 0.43~1.78, P=0.72). The above several studies have defined the criteria for larger CBDS less than 15 mm. Another study [26] believes that the first treatment success rate of EST combined with EPLBD for larger CBDS (≥15 mm) is higher than that of EPLBD alone. Many studies have different conclusions, which may be related to the different research standards for the definition of larger CBDS. Therefore, the definition of “larger CBDS” needs to be further refined, and clinical studies with large samples after the refined definition standards are also needed Further development.

ML refers to the technique of using a gravel mesh basket to cover the stones, and then tightening the mesh basket with a metal spiral sheath to crush the stones, including emergency lithotripsy (OTS) and endoscopic ML. The endoscopic ML technique is generally preferred for difficult stones. , OTS technology is mainly suitable for the failure of ordinary Nets to get stones and stone incarceration [10]. The advantages of ML include easy popularization, better effect and low cost [30]. The overall success rate of ML treatment of difficult CBDS is 90% to 94% [31-32]. When the combination of EST and EPLBD for difficult CBDS fails or is inappropriate, the European Society of Digestive Endoscopy guidelines recommend ML [10].

The limitation of ML is that its operation is complicated, time-consuming, and may require multiple operations [30]. In order to improve the effect of ML, some research [33] believes that, compared with unfolding a basket above large stones, unfolding a basket below large stones (>20 mm) can increase the capture rate of large stones (33.3% vs 94.1%) , P<0.05). Another study [34] believes that short-term (2 to 3 months) biliary stent placement before ML for difficult stones can reduce the time-consuming operation and increase the durability of the basket. Two recent studies have analyzed the related factors of ML failure. Garg et al. [35] believe that stone incarceration is the only relevant factor for ML failure; another retrospective study [36] believes that stone incarceration, stone diameter ≥ 30 mm, and stone to bile duct diameter ratio> 1.0 are significantly related to ML failure. The OR values ​​were 17.83, 4.32 and 5.47, respectively.

POCS assisted lithotripsy can effectively deal with difficult CBDS. A meta-analysis of 31 studies [38] showed that the overall clearance rate of difficult CBDS with POCS-assisted lithotripsy was 88%. Recently, an international multicenter retrospective study [39] evaluated the efficacy of single-operated choledochoscopy on difficult CBDS. The study included 407 patients (306 EHL and 101 LL), and the overall bile duct stone clearance rate reached 97.3%. The incidence of adverse events was 3.7%.

Sandha et al. [40] retrospectively analyzed 51 cases of LL under single operation choledochoscope due to difficult CBDS, the success rate was 93%, and the cost was less than laparotomy and laparoscopic bile duct exploration. Buxbaum et al. [41] compared the efficacy of POCS-guided LL with other conventional therapies (such as ML or balloon stone removal) on larger CBDS (> 1 cm), and found that the endoscopic removal rate of large stones under POCS-guided LL was better. High (93% vs 67%, P=0.009).

An RCT [42] compared the efficacy of single-operated choledochoscope-guided LL and large balloon sphincteroplasty on difficult CBDS. The single-operated choledochoscope-guided LL group had a higher treatment success rate (93.9% vs 72.7%, P=0.021), there was no significant difference in the incidence of adverse events between the two groups. An RCT [43] compared the efficacy and safety of LL and ML under the guidance of POCS on difficult CBDS. 32 cases of CBDS were randomly assigned to the LL group and ML under the guidance of POCS after receiving standard EST and/or EPLBD treatment failure. The group was treated and found that LL had a higher stone clearance rate (100% vs 63%; P<0.01) and a lower radiation exposure dose (20 989 vs 40 745 mGycm2; P=0.04).

In general, for difficult CBDS after conventional treatment fails, POCS-assisted lithotripsy has a definite effect, which has certain advantages compared with traditional ML and other techniques.

For the different lithotripsy techniques assisted by POCS, most studies believe that the efficacy and safety of LL are better than EHL. A systematic review [44] compared the efficacy and safety of LL and EHL for CBDS that failed conventional endoscopic stone removal. The complete bile duct clearance rate and stone comminution rate of LL were higher than those of EHL (complete bile duct clearance rate: 95.1% vs 88.4 %, stone crushing rate: 92.5% vs 75.5%), the postoperative complication rate of LL is also lower than that of EHL (9.6% vs 13.8%). A retrospective study [39] found that in the treatment of difficult CBDS, compared with single-operated choledochoscope EHL, the average operation time of single-operated choledochoscope LL was shorter (49.9 min vs 73.9 min, P<0.001). However, there was no significant difference in stone removal rate between the two.

Since ESWL was first used in the treatment of urinary calculi in 1980, its indications have continued to expand, and it is now also used for the treatment of larger CBDS that are difficult to treat with conventional therapies [45]. The European Society of Digestive Endoscopy guidelines recommend that when conventional techniques cannot remove CBDS and there is no intracavitary lithotripsy technique, ESWL may be considered [10]. ESWL uses hydroelectric or electromagnetic energy to generate shock waves and shatter the stones through the soft tissues of the human body [46]. The ESWL operation is more complicated and requires high technical requirements. In order to facilitate the identification and positioning of stones under fluoroscopy, a nasobiliary drainage tube needs to be inserted, and a contrast agent or physiological saline needs to be continuously injected into the bile duct during the operation. In addition, multiple ESWL and ERCP are required to clean up the stones.

A prospective study involving 283 cases of larger CBDS [47] evaluated the efficacy of ESWL. The removal rate of common bile duct stones was 84.4%, and the number of ESWL operations required for 74.6% of cases was ≤ 3 times, and the complication rate was 15.9%. Epidural anesthesia, shock wave frequency of 90 beats/min, negative stones and the presence of fluid around the stones are helpful for lithotripsy.

A systematic review [44] compared the therapeutic effects of various methods on CBDS that failed conventional endoscopic treatment, and found that the complete bile duct clearance rate and stone comminution rate of ESWL were lower than that of LL. Due to technical limitations, ESWL treatment of bile duct stones is currently seldom carried out in some countries.

Yang Jing et al. [49] compared the efficacy and safety of ESWL combined with endoscopic treatment and ML for difficult CBDS. The results showed that the success rate of lithotripsy and complete stone removal rate of ESWL combined with endoscopic treatment group were higher than those of ML group. There were no significant differences between the two groups in the incidence of complications, length of hospitalization and hospitalization costs.

The postoperative complications rate of ESWL was 8.4%, mainly including biliary hemorrhage (2.9%), cholangitis (2.9%) and pancreatitis (1.7%) [44]. Muratori et al. [50] analyzed the risk factors for recurrence after ESWL treatment of difficult CBDS, and concluded that the three factors associated with gallbladder stones, common bile duct diameter ≥ 11 mm and stone diameter ≥ 19 mm were significantly related to recurrence.

If the calculus is judged as difficult CBDS or failure of conventional endoscopic treatment before surgery, it is recommended to perform EST combined with EPLBD first. If it fails or cannot be carried out, the patient’s condition, hospital hardware conditions and surgeon experience should be considered comprehensively, and ML or POCS should be selected as auxiliary Lithotripsy or ESWL and other techniques for treatment. In addition, as surgical procedures such as laparoscopic common bile duct exploration have become more mature, endoscopic treatment should not be considered for difficult cases.

In some cases, a multidisciplinary team should discuss the surgical method together. For patients who cannot get stones but need emergency relief of bile duct obstruction, they can also undergo endoscopic nasal bile duct drainage, endoscopic retrograde bile duct stent placement, and percutaneous transhepatic bile duct drainage, etc., and then elective treatment. In the future, we look forward to more high-quality clinical studies to come up with detailed best treatment plans for difficult CBDS in different situations.