To put it simply, the boron compound is delivered to the cancer lesion and irradiated with neutron rays to destroy cancer cells through the nuclear reaction between neutrons and boron.

Schematic diagram of the principle of boron neutron capture therapy, sourced from the BNCT Research Center of South Tohoku, Japan

2 Cancer that recurs after radiotherapy can also be treated

4 The treatment cycle is short (1 to 2 irradiations are completed, and the irradiation time is about 30 to 60 minutes for one irradiation. The proton heavy ion therapy is generally about 5-20 times)

5 The effect of treatment can be predicted through PET examination

6 No need for oxygenation effect: it can kill not only oxygen-rich cells, but also hypoxic cells and cells in quiescent phase

2. Which cancers can be treated with boron neutron capture therapy?

In addition, brain tumors, head and neck cancer, malignant melanoma, lung cancer, pleural mesothelioma, liver cancer, breast cancer and other diseases have also undergone clinical trials of BNCT treatment. So far, there have been more than 400 cases of brain tumors and more than 30 kinds of malignant melanomas. Tumors and 130 cases of head and neck cancer were treated with BNCT. 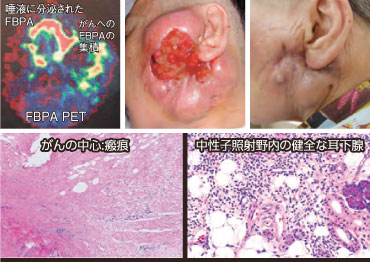 ●must be an adult

1) The location of the lesion is deeper

Tumors that spread to the nasopharynx, oropharyngeal mucosal walls, and metastases to the posterior pharyngeal lymph nodes are all in the deep, so there are more cases that are not applicable (the thinner facial bones are OK).

2) All lesions are located on one side, but exceed the effective range (depth 6cm, 6cm parallel to the body surface skin).

If the size of the lesion exceeds the effective range, it is judged as not applicable because it cannot be cured.

3) There is distant transfer

4) The tumor infiltrates the carotid artery or surrounds it for more than half a week.

5) Tumor infiltrates the skull base:

Due to the formation of the fistula leading to intracranial infection, the risk of death due to treatment is extremely high.

If there is a slight possibility, a contrast MRI is needed for evaluation.

6) The primary cancer is not head and neck cancer

7) Stromal tumors, such as sarcoma and hematological tumors

9) Have dental caries and have not completed the treatment

10) Patients who need regular oxygen, such as chronic lung disease

15) Patients with pacemakers or ICD implants

*In the case of other indwelling metals in the body, it is necessary to determine whether it is suitable for treatment based on the confirmation of its composition. However, the case where the filling in the tooth is metal is not limited.