The most notable progress in the field of tumor therapy is targeted therapy and immunotherapy, which provide new options for prolonging survival of patients with advanced solid tumors.

Among them, targeted therapy can be said to accurately kill cancer cells without damaging other normal cells in the human body. This is a treatment based on the cellular and molecular level, which can be understood as the “gene” drug. It can recognize the unique gene mutations of tumor cells, and use different targeted drugs to block the signal transduction pathways of tumor cell growth and reproduction for the identified carcinogenic sites, thereby killing cancer cells.

The immunotherapy, called the “fourth therapy”, is an absolute hot spot in the field of tumor treatment research at home and abroad, and it can be called a revolutionary breakthrough. As early as 2013, in the annual ranking of the top ten scientific breakthroughs by the “Science” magazine, immunotherapy was already at the top of the list. Both PD-1/PD-L1 therapy and numerous cellular immunotherapies have sprung up and developed rapidly, which undoubtedly set off an upsurge in cancer treatment.

So today, we will summarize the most popular anti-cancer drugs and cellular immunotherapy for the treatment of solid tumors. I hope that there will always be one suitable for cancer friends!

Drugs: Effective rate of 79%, not limited to the cancer type larotinib to overcome NTRK solid tumors

The latest data on the treatment of NTRK solid tumors with the broad-spectrum anticancer drug larotinib was updated at the 2020 American Association for Cancer Research (AACR) virtual annual meeting. 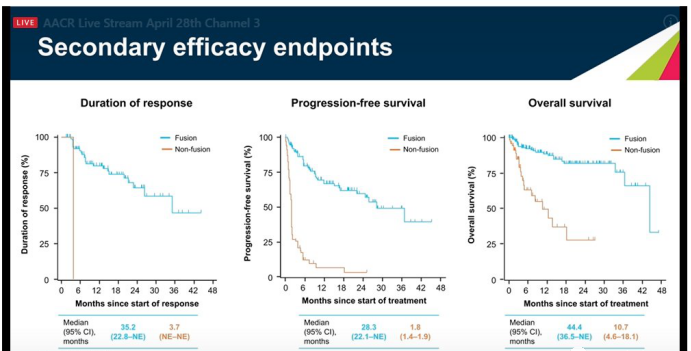 Treatment response: 64% of patients in the NTRK fusion group are still continuing treatment. 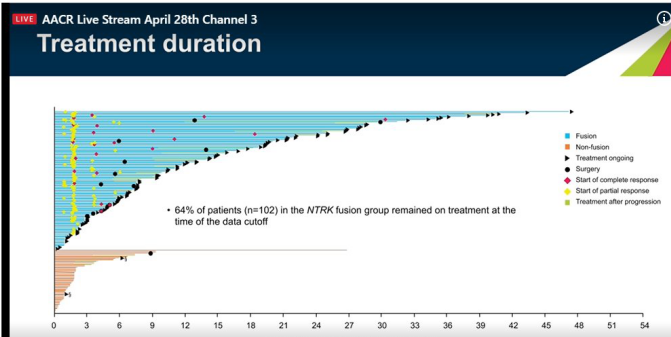 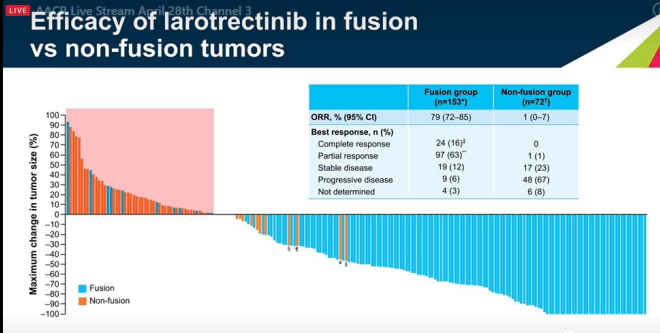 Clinical data shows that the response rate of pediatric tumor types carrying neurotrophic tyrosine receptor kinase (NTRK), ROS1 or anaplastic lymphoma kinase (ALK) fusion to treatment is as high as 100% (complete remission and partial remission)! Including intractable tumors in the central nervous system! This number is unprecedented, and it is believed to open a new door of hope for childhood cancer patients.

1) Among patients with NTRK fusion-positive solid tumors, the objective response rate ORR (tumor reduction) of entrectinib (entrectinib, RXDX-101) was 57.4%, and objective responses were observed across 10 different types of tumors (The tumor shrinks). Among patients with brain metastases, the ORR of entrectinib’s objective intracranial response rate was 54.5%, of which more than 1/4 achieved complete remission (all lesions disappeared).

In May 2020, the New Drug Marketing Application (NDA) and Marketing Authorization Application (MAA) of Pralsetinib (BLU-667, Presitinib) for the treatment of locally advanced or metastatic RET fusion-positive non-small cell lung cancer have been approved by the United States. FDA and European Medicines Agency (EMA) accept. At present, pralsetinib has been granted priority review by the US FDA, and it is expected to make an approval decision before November 23, 2020. This means that if all goes well, in the fourth quarter of this year, we will usher in the second RET inhibitor after LOXO-292.

On July 2, 2020, pralsetinib (BLU-667, Presitinib) once again submitted a new drug application to the FDA for the approval of new indications for the treatment of patients with advanced or metastatic RET mutant medullary thyroid cancer and Patients with RET fusion-positive thyroid cancer. We look forward to the approval of this drug for marketing as soon as possible.

Speaking of immunotherapy, everyone is familiar with PD-1 and CAR-T, but these are just the tip of the iceberg.

In the early stages of cancer, the immune system tries to attack the tumor by mobilizing special immune cells of lymphocytes. Lymphocytes have the ability to recognize and attack tumor flow and penetrate deep into the tumor. These cells are called tumor-infiltrating lymphocytes (TIL), which were discovered by Rosenberg and his team, the leader of the immune world.

Dr. Rosenberg believes that they are the most powerful immune cells that penetrate into the enemy’s interior, but due to some reasons (such as tumor microenvironment and PD-1), their functions are inhibited and cannot effectively kill tumors in tumor tissues. cell. However, scientists use some in vitro culture methods to enrich certain types of lymphocytes in these tumor tissues, and then return them to patients, which can play an anti-tumor effect, and the combined PD-1 effect will be better.

In June 2019, the FDA approved the tumor-infiltrating lymphocyte (TIL) treatment method LN-145 as a breakthrough treatment designation. This is the first time that a cellular immunotherapy for solid tumors has won this award. I believe that it is only a matter of time before it goes to market. Once approved by the FDA, this will be the first cellular immunotherapy for solid tumors and will bring huge survival benefits to cancer patients.

The FDA grant is based on the data from the ongoing second phase of the innovaTIL-04 (C-145-04) positive trial. The summary data shows that the overall response rate (ORR) for TIL treatment in patients with advanced cervical cancer is 44%.

3. The median follow-up time was 3.5 months, and 11 out of 12 patients responded continuously;

4. No serious side effects occurred.

In recent years, scientists have made considerable efforts to develop new drugs and new immunotherapies to overcome different cancers. We look forward to the fact that more and more pre-clinical/clinical trial data can piece together a complete puzzle, fully demonstrating the true strength of targeted drugs, PD-1/PD-L1 and cellular immunotherapy in treating many cancer types.