Prostate cancer ranks second in the incidence of men. Understanding the heterogeneity of prostate cancer patients and the tumor microenvironment at the single-cell level can understand the occurrence and progression of the disease, and also help to screen new markers and guide treatment.

Today, the editor will share with you a single cell study, Single cell analysis reveals onset of multiple progression associated transcriptomic remodellings in prostate cancer, which is a collaboration between Shanghai Changhai Hospital, the University of Toronto in Canada and the Cancer Hospital of Fudan University in China, published in Nature in 2021. Cell Biology (IF=20.042) magazine.

In this work, the author analyzed 27 tissue samples and obtained 111,914 single cells, providing a single-cell gene expression profile of prostate cancer. The research results are of great value for new treatment strategies and marker screening for prostate cancer. .

In Luminal cells, in addition to expressing classic keratin genes, the expression of T cell costimulatory genes was also observed (Figure 1B), indicating that Luminal epithelial cells are involved in antigen presentation.

The CNV deviation in Luminal cells was significantly higher than that in other cells, indicating that non-malignant epithelial cells may also have CNV changes (Figure 1D).

Different patients have different cell types (Figure 1E), among which Luminal cells are the main epithelial type in most patients. 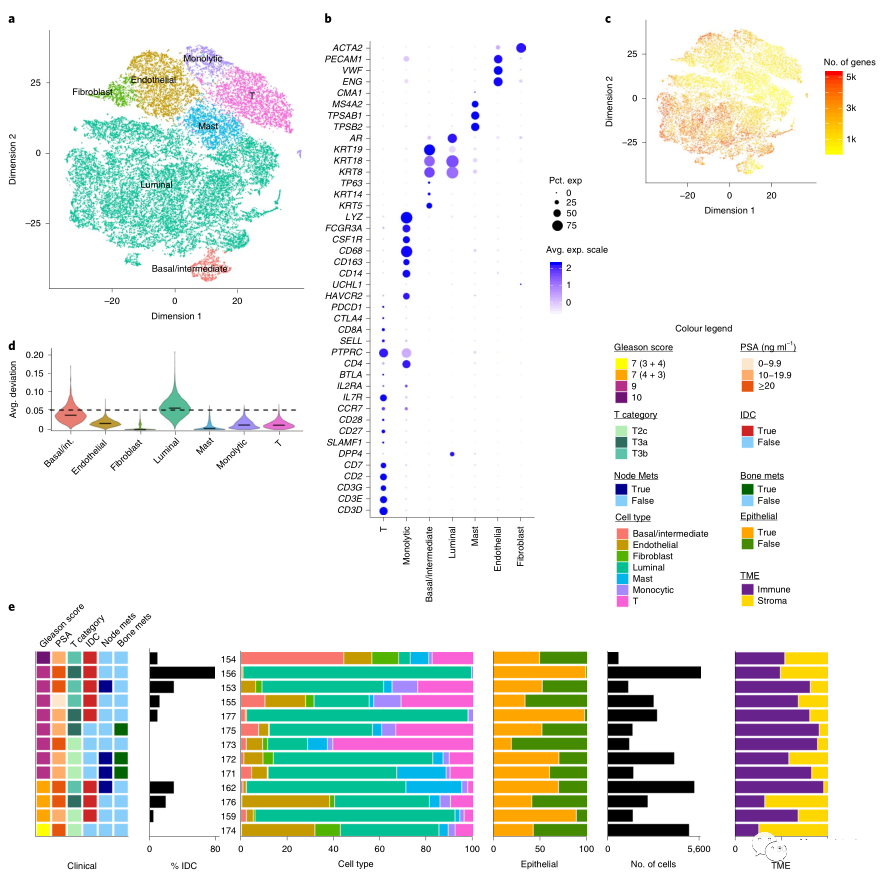 Functional enrichment analysis found that the cluster12 cell cycle-related cell population was enriched in functions such as oxidative phosphorylation and DNA replication, while basal/intermediate cells were related to antigen presentation (Figure 2C). 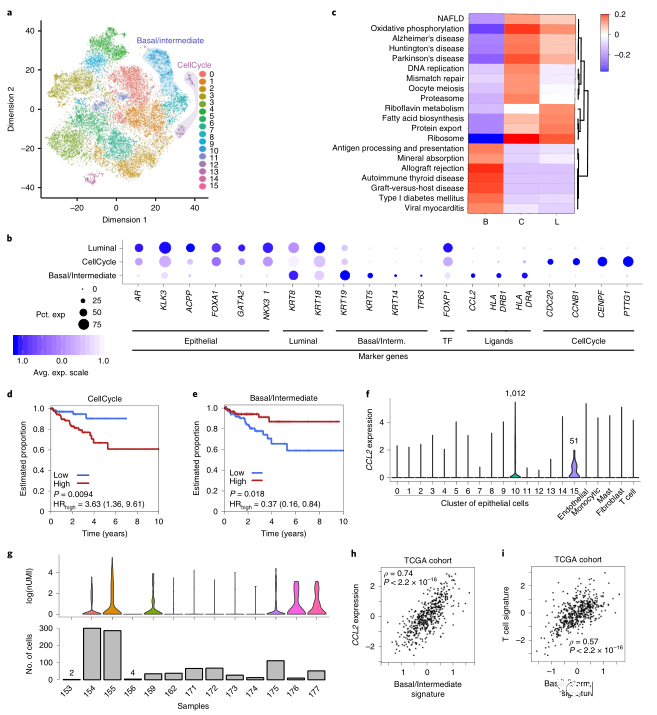 When paying attention to tumor-related macrophages, it was observed that there are two subtypes of M1 and M2, and the two subtypes have a strong positive correlation (Figure 3D). However, the biological pathways involved in different macrophage subclusters are different. Cluster 6 shows the activation of osteoclast (OC) related pathways, such as mineral absorption and lysosomes (Figure 3E). 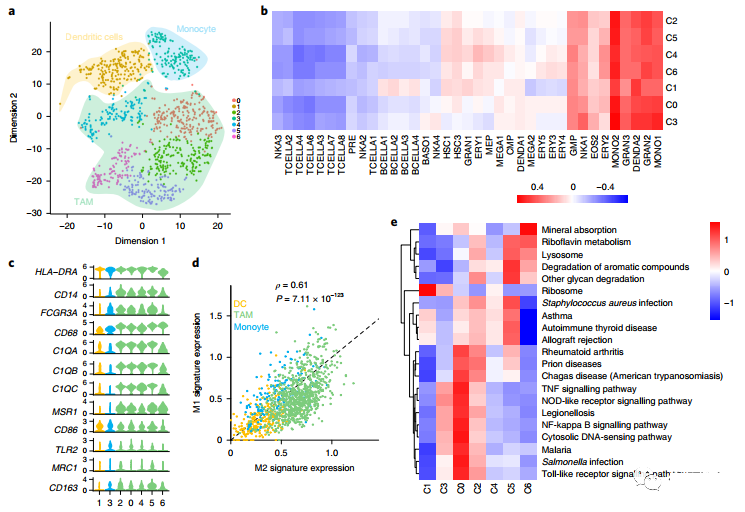 Among them, Cluster 2, 3, and 5 are all CD8+ effector T cells, but they show strong heterogeneity. Cluster 5 has lower immune and metabolic activity, while Cluster 3 has stronger T cell activity.

PSA (Prostate Cancer Specific Antigen) is a commonly used clinical molecular diagnostic marker for prostate cancer, which is secreted by tumor cells. KLK3 is a gene encoding PSA. The expression of KLK3 gene was found in Custer3, Cluster5 and Treg cells. Along with the increase in the abundance of KLK3 expression, the extracellular vesicle (EV) activity of T cells also gradually increased (Figure 3H). 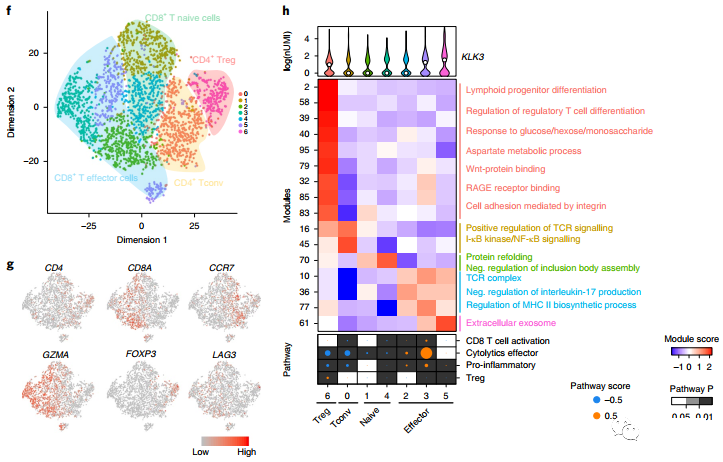 In order to verify whether T cells expressing the epithelial tumor marker KLK3 only appears in T cells of prostate cancer, the authors analyzed the single-cell transcriptome data of four other cancer types: head and neck squamous cell carcinoma (HNSCC), non-small cell Lung cancer (NSCLC), colorectal cancer (CRC) and hepatocellular carcinoma (HCC). The expression of the tumor marker gene KLK3 in T cells was found in the four cancer types (Figure 4A), indicating that the high expression of KLK3 may be a common feature of infiltrating T cells.

The author verified the expression of tumor marker gene KLK3 in T cells through flow cytometry and RT-PCR technology (Figure 4B).

In order to explore whether the vesicle EV secreted by the tumor affects nearby lymph nodes and the extent of its impact, the authors performed single-cell transcriptome sequencing on a patient of Cohort 2. This patient has 1 primary prostate cancer lesion and 2 external iliac lymph nodes, and MRI and histopathological analysis were judged to have no lymph node metastasis. However, single-cell CNV analysis showed that the epithelial cells of the left lymph node were consistent with the CNV of the tumor cells, while the right lymph node did not. It is speculated that the patient had slight left lymph node metastasis (Figure 4D, E, F), and the left lymph node There is a large amount of KLK3 expression in T cells.

CNA analysis showed that a part of the epithelial cells (84/153) contained CNAs that were consistent with the average tumor CNA profile, indicating that the left LN had lymphatic micrometastasis (Figure 4H). The authors observed that KLK3 is widely expressed in all types of cells, most of which are T cells, which are expressed in lymph samples on the left but not in lymph samples on the right (Figure 4I). It indicates that the genetic changes of immune cells in the lymph nodes may occur before the actual metastasis. 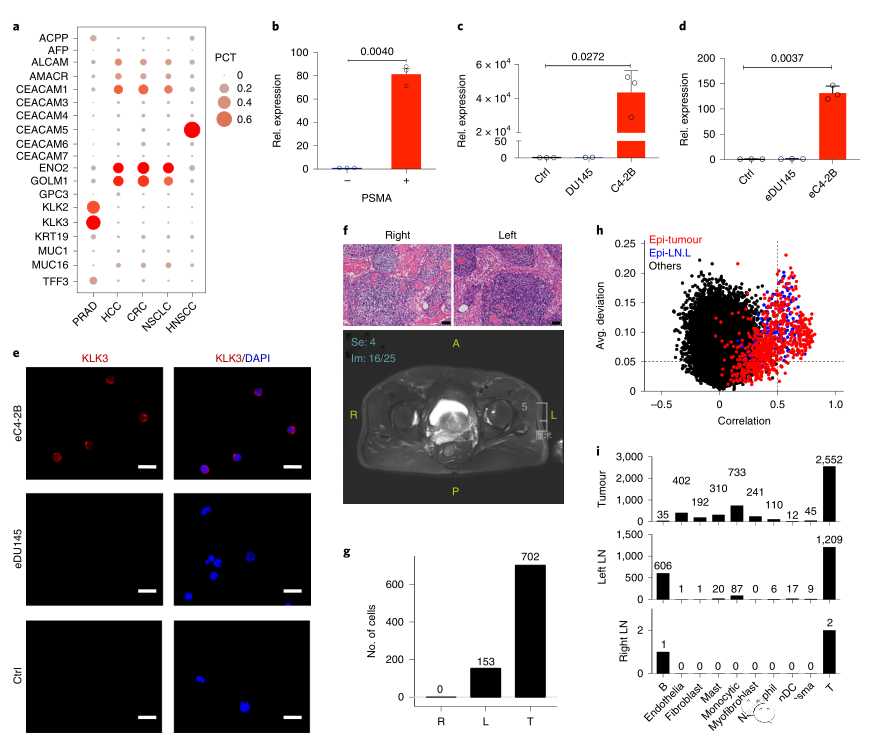 Cancer-associated fibroblasts (CAF) play an important role in the progression of prostate cancer. The authors identified 948 fibroblasts (Figure 5A), which can be subdivided into three subtypes (Figure 5A, B), of which VIM is at 3 High expression in all subgroups.

The authors performed gene enrichment analysis on the first 150 up-regulated genes of each CAF subtype. All three subtypes were enriched for angiogenesis-related functions, and those related to myofibroblasts, cell adhesion, and extracellular matrix (ECM) Function (Figure 5C) is subtype specific.

The most abundant pathways in cluster 0 and cluster 1 are mostly related to immunity, while the most common pathways in active endothelial cells (aECs) are ECM receptor signaling and focal adhesion pathways (Figure 5K). 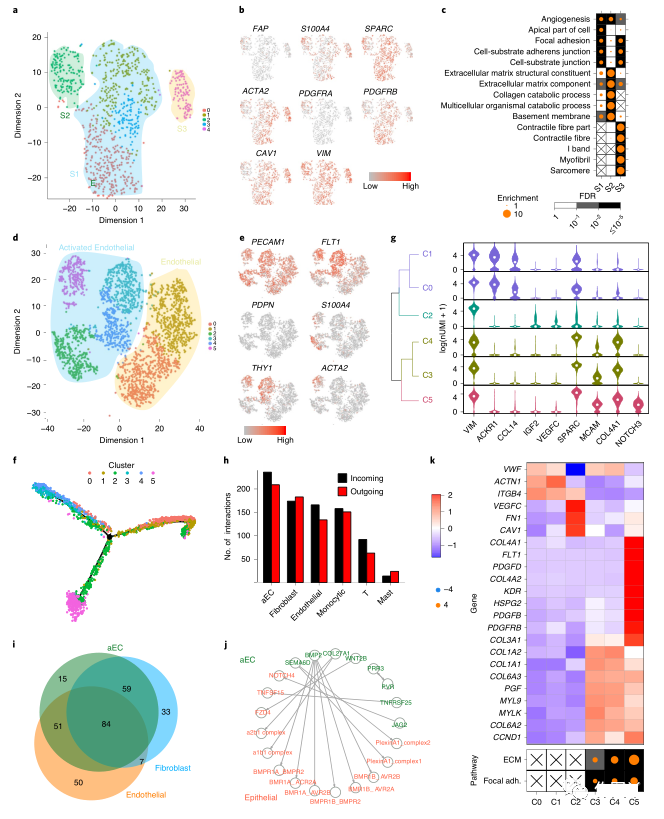 The co-culture technique once again verified that aECs can increase the invasion ability of prostate cancer cells (Figure 6H). 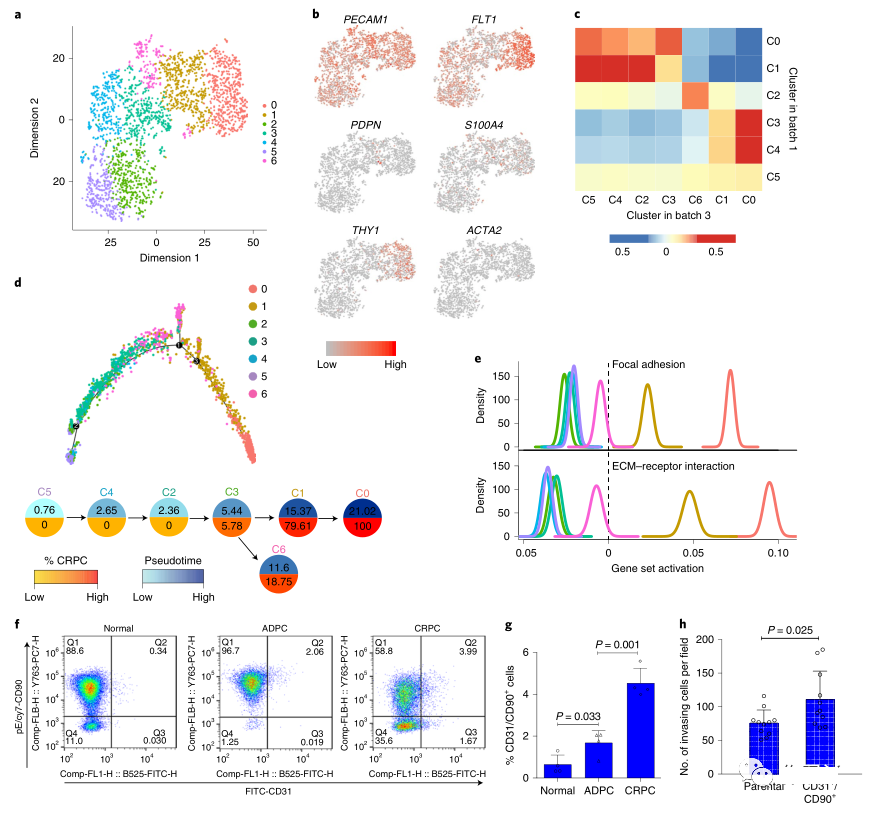 The study used single-cell sequencing to analyze the transcriptome of prostate cancer, revealing the changes of cell subgroups in the microenvironment at each stage of the development of prostate cancer, and identifying the endothelial cells that are aggressive.

The molecular typing markers at the single cell level of prostate cancer and cell subtypes related to tumor progression were discovered. This research has great value for the development of new treatment strategies for prostate cancer and tumor biomarkers.