On January 9, 2021, Ren Shancheng of Shanghai Changhai Hospital, in cooperation with Ho Housheng from the University of Toronto and Wang Jianhua from Fudan University Cancer Hospital, published in Nature Cell Biology the title: Single cell analysis reveals onset of multiple progression associated transcriptomic remodellings in prostate cancer The first unit of the article is the Department of Urology, Shanghai Changhai Hospital. 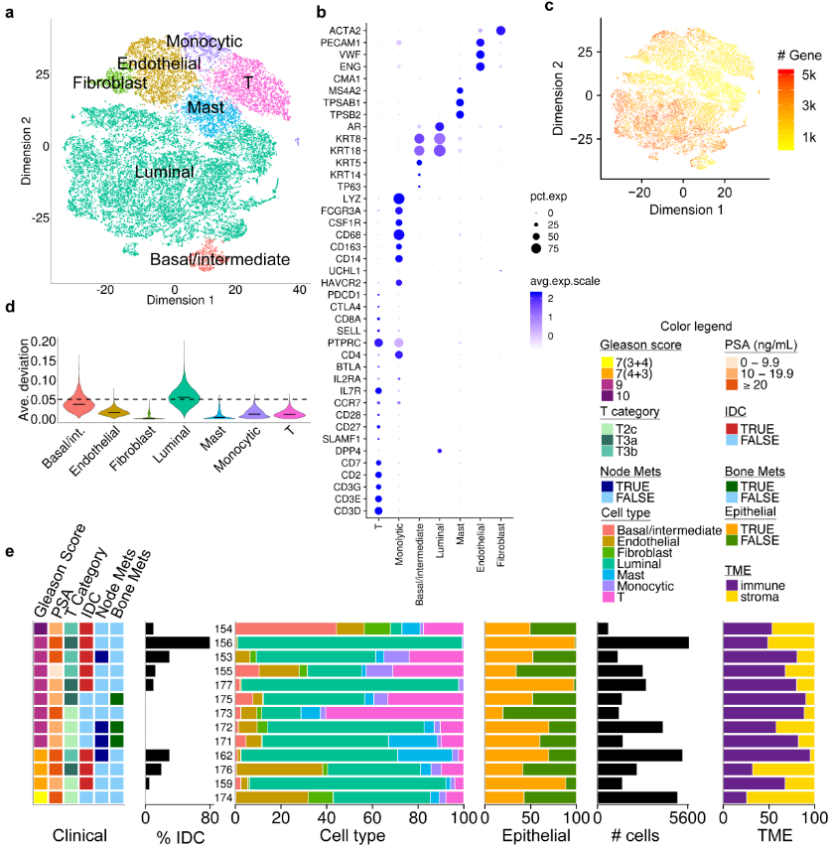 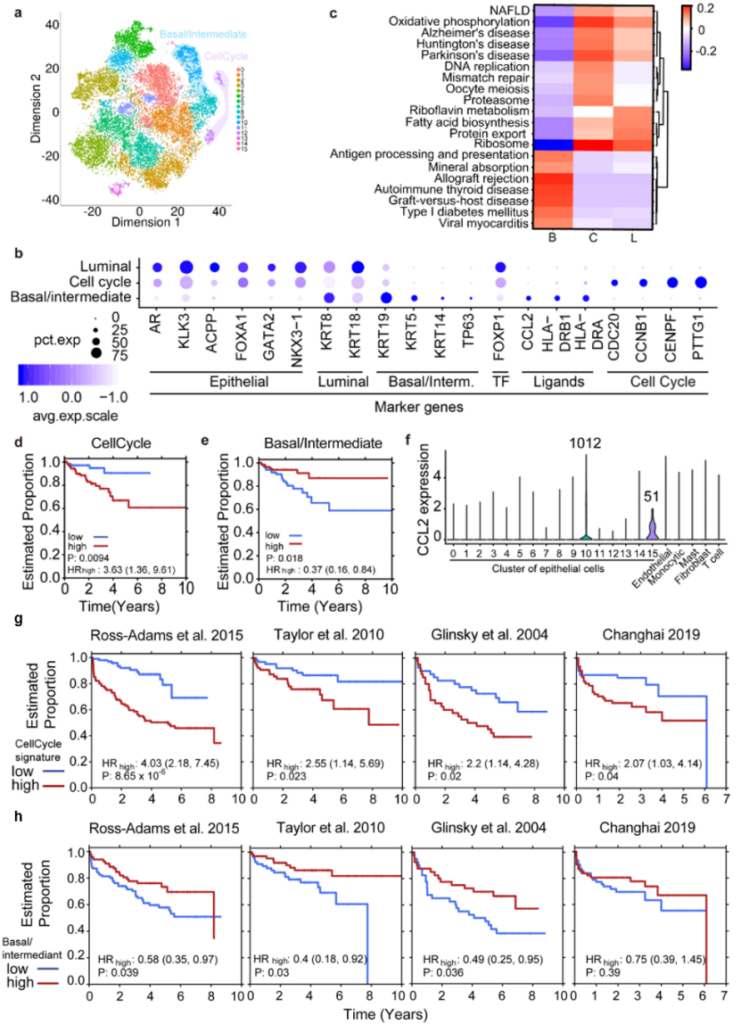 The researchers further studied the infiltrating T cells in prostate tumors and subdivided them into 7 cell subgroups. KLK3 is the gene encoding the prostate-specific antigen PSA. It is a commonly used molecular marker in prostate clinical practice. It is generally believed to be expressed only in prostate cancer cells. However, researchers found that KLK3 is in a subgroup of regulatory T cells (Cluster6) and two effector T cells. Cell subsets (Cluster 3 and 5) are specifically expressed, and the extracellular vesicles and exosomal pathways of the latter are activated, suggesting that tumor-secreted vesicles mediate the transfer of KLK3 to T cells (Figure 1E). The researchers also found T cells expressing PSA/KLK3 through RNA fluorescence in situ hybridization and immunofluorescence experiments, which proved the feasibility of this signal transmission pathway (Figure 1F).

Among the cases involved in the study, the imaging and postoperative pathology of a high-risk prostate cancer patient showed that the left and right external iliac lymph nodes were negative.

Through single-cell transcriptome sequencing, researchers found that there are malignant epithelial cells in the left lymph node tissue, and T cells generally express KLK3, that is, the left lymph node has developed clinically unrecognizable micrometastasis; and despite the right No malignant epithelial cells were found in the lateral lymph node tissues, but T cells have high expression of KLK3, suggesting that the tumor microenvironment cells have formed a “pre-metastatic niche” structure.

This phenomenon is not only present in prostate cancer. Researchers also used single-cell public databases to find that in renal cell carcinoma, colorectal cancer, non-small cell lung cancer, head and neck squamous cell carcinoma and other tumors, T cells are expressed correspondingly The number of tumor markers suggests that it is a widespread phenomenon that tumor cells use their own markers to influence the function of immune cells. 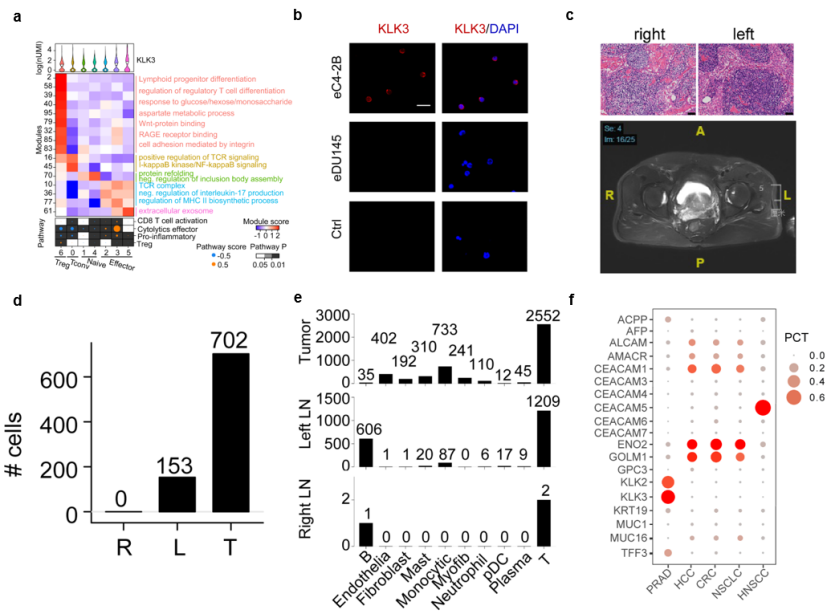 The researchers further performed single-cell transcriptome sequencing on 3 additional normal prostate and indolent prostate cancer samples from radical bladder surgery and 5 tumor tissue samples from CRPC patients. Through pseudo-chronological analysis, it was found that the proportion of aEC varies with the tumor. Progression to CRPC gradually increased, most of the aEC cell subsets were derived from CRPC samples, indicating that aEC cell subsets are closely related to the progression of prostate cancer to CRPC. 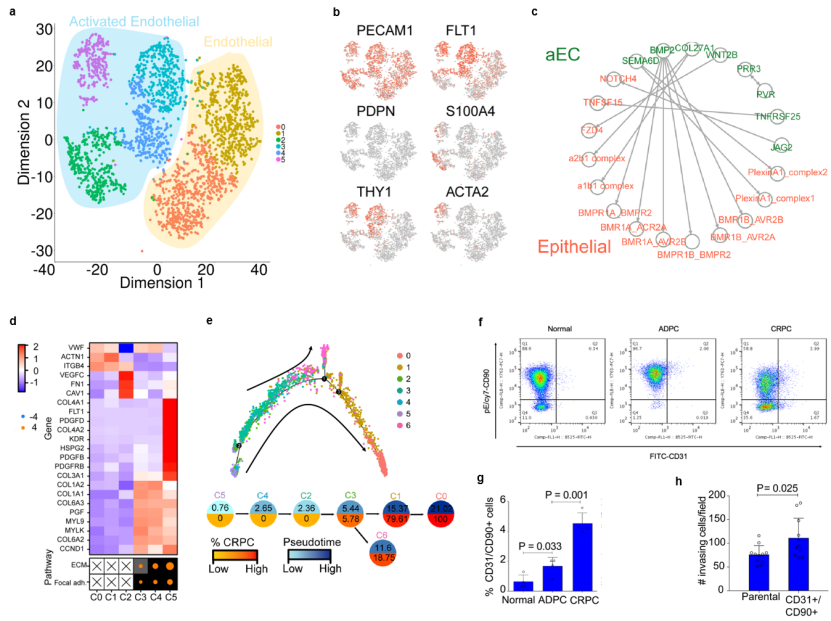