A research report entitled “Single-cell resolved imaging reveals intra-tumor heterogeneity in glycolysis, transitions between metabolic states, and their regulatory mechanisms” was published in the international journal Cell Reports by scientists from the Francis Crick Institute and other institutions Studies have pointed out that single-cell imaging technology may be expected to help analyze the metabolic state of the tumor microenvironment.

Many large pharmaceutical companies are racing against time to launch vaccines against SARS-CoV-2. The method used is to modify existing experimental mRNA gene therapies to carry new payloads; although these cancer vaccines originally coded for a single The RNA molecule neoantigen concatemer can be optimally displayed on specific HLA receptors, thereby enhancing the anti-tumor response of CD8+ T cells. But now they can provide an optimized version of the spike protein receptor binding domain to stimulate the production of protective neutralizing antibodies.

But things don’t seem to end here. These pharmaceutical companies are still working hard to redirect simplified drug discovery pipelines to screen small molecular inhibitors that can block SARS infection, virus life cycle, or sequelae of inflammation; as the vaccine battle continues Winners and therapeutic challenges are beginning to emerge, and now an inspired industry is reigniting researchers’ battle against cancer with new vitality and purpose. 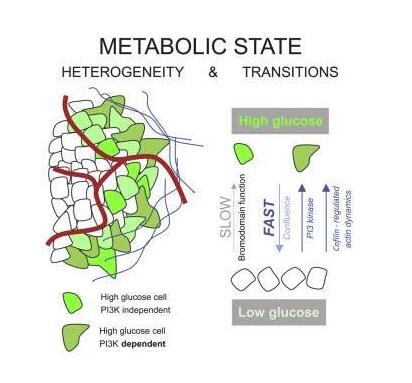 In this study, the researchers reported a new technology that can help to simultaneously evaluate protein biomarkers and genetic defects in single cells throughout the life cycle of cancer; although this type of information is useful in heterogeneous tumors. When a new type of drug-resistant clone appears in the drug-resistant clones, it is important to adjust the therapy, but there may be more stories; the genetic map of the cell reveals what it can do, that is, what matrix it may use, and which matrix it absolutely needs; but Regarding what the cells are doing at any particular time, researchers may not know; in other words, this reveals the rate at which cells metabolize these substrates/substrates. At the top level, this may be through glycolysis, aerobic Glycolysis or mitochondrial oxidative phosphorylation and other processes.

Imaging techniques such as positron emission tomography (18F-FDG PET), computed tomography, and hyperpolarized magnetic resonance imaging (MRI) have always been valuable tools to distinguish the metabolic state of tumors, but these tools lack sufficient resolution to study cells For this reason, researchers need to develop cell culture and in vivo models. At the same time, they also need to perform imaging studies on individually labeled cells in these models. In this study, the researchers developed a New technologies to carry out such research.

The glycolysis process in tumors is often up-regulated, which leads to an increase in the biosynthesis of metabolic intermediates required for cell proliferation. Cells can achieve this by up-regulating phosphatidylinositol 3-kinase (PI3K) signaling. Either by acquiring active mutations or inactivating mutations in the phosphatase PTEN; or increasing receptor tyrosine kinase signals. PI3K signal transduction can partly enhance the flux of glycolysis through AKT (Protein Kinase B), and ultimately control the skeleton and local membrane dynamics of actin through other mediators. In estrogen receptor-positive tumors (ER+), a variety of PI3K inhibitors have been approved as therapies. Of course, for the more resistant triple-negative tumor subtypes, scientists are still further exploring their effectiveness Treatment.

In the article, the researchers used a combination of glucose fluorescence resonance energy transfer imaging (FRET), metabolomics, detection of reactive oxygen species, and fluorescence imaging of mitochondrial membrane potential (with TMRE tags) to define tumor abnormalities at the single-cell level. Qualitative characteristics; subsequently, the researchers also used flow cytometry to separate cells with high and low glucose concentrations for cultivation, so as to conduct more specific analysis. MCF-7 breast cancer cells can be cultured in different types of culture media to reflect different tumor environments. Then the researchers implanted the culture media into the breast fat pad tissue of mice; implanted the tumor cell line Returning to the body and the original tissues (orthogonal model) can preserve normal immune-tumor interactions.

In addition, patient-derived xenografts (PDXs) can also be implanted into immunosuppressed mouse models to evaluate human cancer in a prescribed environment; traditionally speaking, cancer cells can be implanted Going down to the skin is convenient for mouse research. However, this kind of tumor will ulcerate prematurely and force the study to be terminated prematurely; and new experimental procedures such as subQperior (such as subQperior directly into the matrix of the breast fat pad) can be used as cancer Important model for research.

Researchers have found that tumor tissues are mixed with high-glucose and low-glucose cells in different regions, and these cells can maintain their state for more than 10 hours; it turns out that these metabolic states can be passed on to progeny cells across mitosis, and even adjacent The cells can also be completely different. Researchers speculate that the genetic basis of metabolic status may be epigenetic regulation; and through testing a variety of inhibitors, they found that although PI3K inhibition can “knock down” many cells, when a special bromine domain protein is Better results will be obtained when suppressed at the same time. The bromine atom contains 110 amino acid groups, which can recognize the apparent acetylation modification of the N-terminal tail of histone; when the lysine acetylation “reader” of the bromine atom chain fails, the cell will become resistant to PI3K inhibitors. To date, researchers have discovered at least 43 bromine atom proteins, many of which are histone acetyltransferases.

Researchers have observed that cancer cells in different states have different susceptibility/vulnerabilities. Cells with high glucose are especially dependent on extracellular pyruvate, but this vulnerability is found in the presence of low-glucose cancer cells or stromal fibroblasts. It will be masked; one of the regulators of pyruvate dehydrogenase is Akt kinase, which suggests that there may be other ways to treat these cancer types. Combining single-cell genetic and protein marker multi-omics predictors with single-cell metabolomics, researchers may be able to come up with comprehensive insights that are effective against any cancer.