According to the World Health Organization’s International Agency for Research on Cancer (IARC) released the latest global cancer burden data in 2020. In 2020, the number of new cases of breast cancer worldwide will reach 2.26 million, replacing lung cancer as the world’s largest cancer.

On April 19, 2021, Zhang Xiang’s team at Baylor College of Medicine found that the skeletal microenvironment surrounding ER+ breast cancer cells reduced the expression of ER in these cells, resulting in resistance to ER-targeted endocrine therapy. It was further discovered that the skeletal microenvironment triggers the reprogramming of cancer cells, thereby enhancing the ability of cancer cells to metastasize or spread to other tissues.

The former was published in Developmental Cell with the title: “The bone microenvironment increases phenotypic plasticity of ER+ breast cancer cells”. The first author is Igor L. Bado and Zhang Weijie, and the corresponding author is Zhang Xiang.

The latter was published in the Cell journal under the title: “The bone microenvironment invigorates metastatic seeds for further dissemination”. The first author is Zhang Weijie and Igor L. Bado, and the corresponding author is Zhang Xiang.

The corresponding author of these two papers, Professor Zhang Xiang of Baylor College of Medicine, said that metastasis to other organs is the main cause of cancer-related deaths and is also the focus of research in his laboratory for many years. Most breast cancer metastasizes to bones. However, in more than two-thirds of cases, metastasis is not limited to bones, but will later be transferred to other organs and eventually lead to death, which is still a mystery.

In these two papers, Zhang Xiang’s laboratory applied their previously developed transfemoral artery injection
(IIA) Early bone metastasis model of tumor cells to study the interaction between cancer and bone with single-cell resolution to understand what happens when ER + breast cancer cells transfer to the bone, in order to find out what causes it to endocrine therapy Resistance and enhance the cause of metastasis to other organs.

Interestingly, the interaction with osteoblasts also triggers changes in the gene expression of these cancer cells, giving them stem cell-like properties, such as uncontrolled self-renewal and differentiation into various cell types. These properties can make Cancer cells have a stronger ability to metastasize.

The research team further determined that the bone microenvironment changes the metabolic pathways of cancer cells, among which the EZH2-mediated pathway pushes ER+ breast cancer cells to a stem cell-like state, and further confirmed that:

Targeting EZH2 can reverse the resistance to endocrine therapy caused by the bone microenvironment. 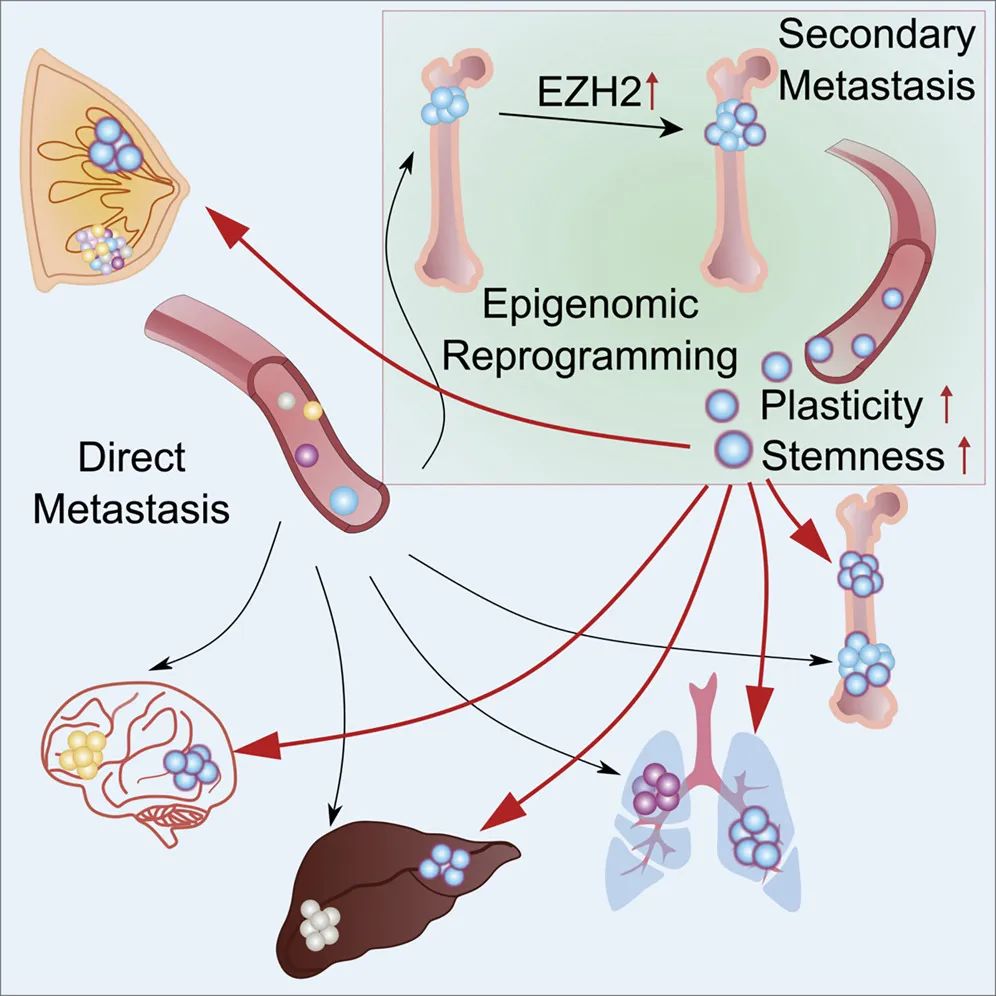 The above findings are closely related to the series of work of Dr. Zhang Weijie, who is a postdoctoral fellow in Zhang Xiang’s laboratory and the first author of the study.

Zhang Weijie said that the bone microenvironment is like a “gas station” for cancer cells, enhancing their ability to spread to other organs. The above findings also support the view that many metastases may not be caused by the primary tumor, but by the further spread of other metastases.

These findings have never been observed before. Zhang Weijie said that this is due to the unique early bone metastasis model of tumor cells injected through the femoral artery (IIA) used by the team. In this model, cancer cells can be confined to the bones. The starting position of, which can follow subsequent transfers.

In addition, the skeletal microenvironment can also enhance other types of cancer, such as prostate cancer.

In summary, these studies reveal a previously unrecognized new role of the skeletal microenvironment in the process of cancer metastasis, elucidate that the reprogramming process drives multi-organ metastasis of end-stage cancer, and provides a mystery of resistance to endocrine therapy for ER+ breast cancer. The new insights suggest that the EZH2-mediated epigenetic remodeling process is a potential therapeutic target for secondary bone metastasis.