The diversity of tumor cells drives the reorganization of the liver cancer microenvironment.

The biological diversity of tumor cells is a key factor in the treatment failure of solid malignant tumors and the poor prognosis of patients.

This work analyzed the single-cell data of 19 patients with liver cancer and found that there is a diversity of malignant cells among tumors, and there are also large differences in the tumor microenvironment, and found consistency in the independent data sets of 765 liver cancer patients. the result of.

During the occurrence and development of cancer, there are often complex genomics and tumor microenvironments among various tissue types.

At the same time, it is very difficult to effectively identify driver genes among thousands of passenger genes, which also limits the predictability of precision tumor treatment strategies.

Therefore, the diversity of cancer genomes, especially intratumoral heterogeneity (ITH), will lead to the failure of tumor treatment.

The molecular characteristics of tumor cells at the single-cell level may help to identify and clarify the driving factors of cancer and the time sequence of cancer development. 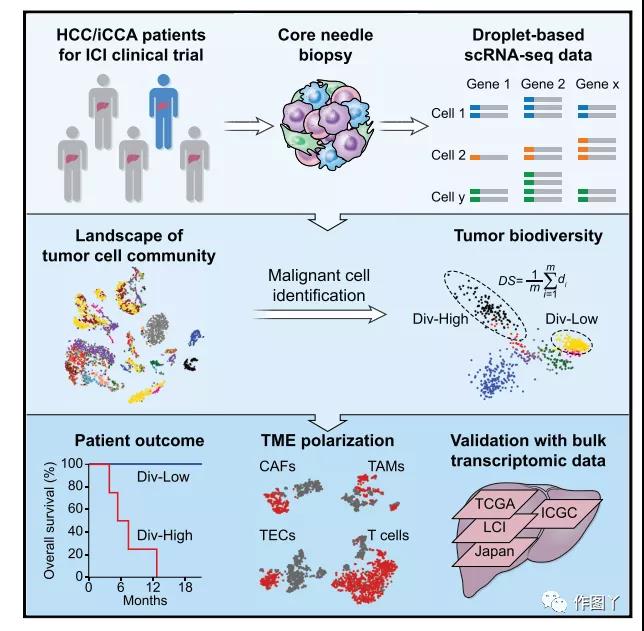 To test the diversity of tumor cells, the team performed single-cell RNA sequencing (scRNAseq) in newly isolated HCC and iCCA patients in clinical trials of immune checkpoint inhibitors. There are a total of 12 patients in the training set (set 1), and a total of 7 patients in the validation set (set 2).

This work first standardized the data. Cells with more than 500 genes detected in each cell were retained. A single-cell transcriptome of 5115 cells in set 1 was obtained, and then the 2244 genes with the largest differences among all cells were obtained. Principal component analysis.

The t-SNE analysis showed that some of the patient’s cells formed different clusters, while others overlapped with each other. It was also found that some cells express high levels of epithelial marker genes, suggesting that they are potentially proto-cancerous (Figure 1C). 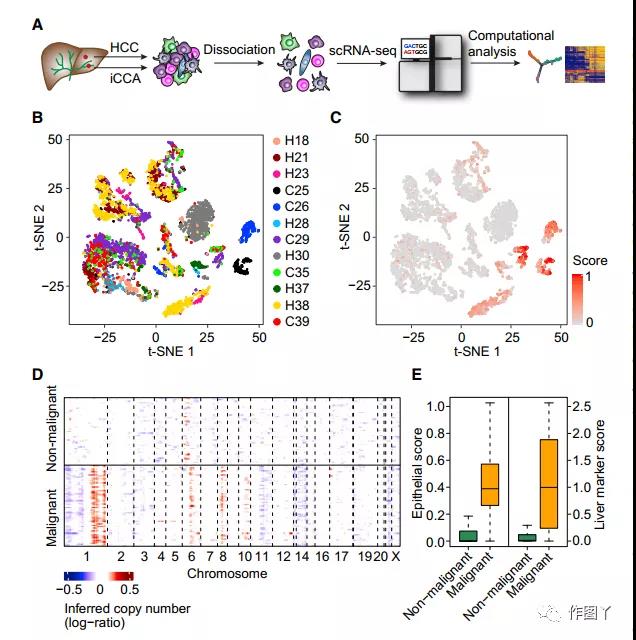 Through t-SNE analysis of malignant and non-malignant cells, it was found that malignant cells formed patient-specific cell clusters. At the same time, it was also observed that the cells inside the tumor were also heterogeneous, indicating that there is transcriptome heterogeneity between and within tumors. (Figure 2A). 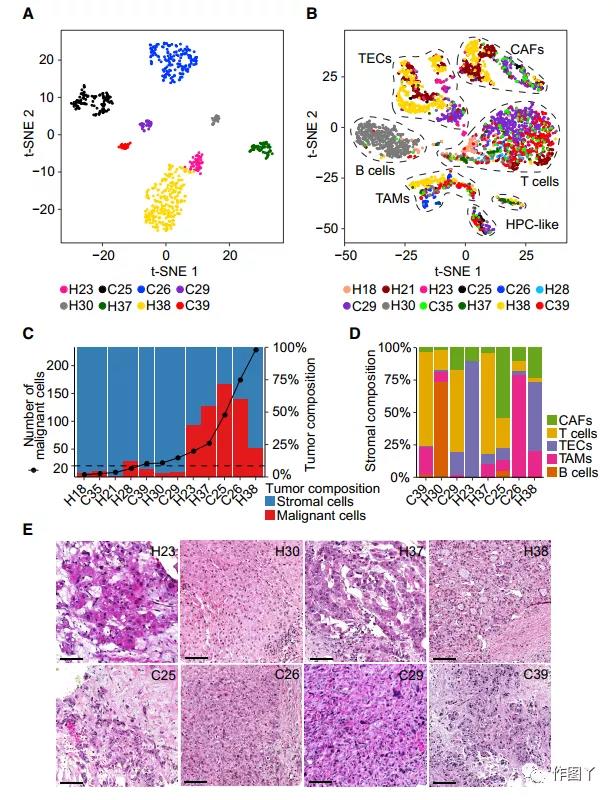 By comparing the average expression levels of 10 liver cancer stem cell-related genes EPCAM, KRT19, PROM1, ALDH1A1, CD24, ANPEP, CD44, ICAM1, CD47, and SOX9, the article determined the relationship between the proximity similarity of tumor cells and cell stem cells (Figure 3A). And through the correlation analysis of all malignant cells, the diversity of the transcriptome in the tumor was further revealed (Figure 3B).

In order to further determine the level of ITH, the article developed a method for calculating tumor cell-specific transcriptome diversity scores. Using PCs instead of the original malignant cell gene expression profile to measure the diversity of each tumor (ie ITH), to capture the main information and reduce noise (Figure 3C). 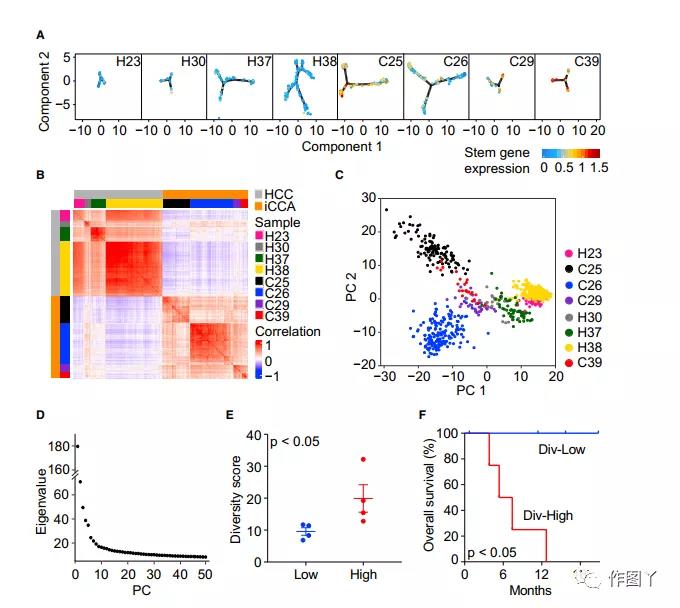 In the validation set 1, the transcriptomes of non-malignant cells from div-high and div-low tumors are different (Figure 4A). When a single cell type was analyzed, the difference was further obvious (Figure 4B), suggesting that TME may be related to tumor cell diversity.

Since VEGFA is the direct target of hypoxia-inducible factor 1-α (HIF1A), and HIF1A is a key factor that induces hypoxia, the team determined that in set 1, div-high tumors are more prone to hypoxia than div-low tumors. The team found that the expression levels of hypoxia-related genes in tumor cells in the div-high group were much higher than those in the div-low group (Figure 4G).

The article performs PCA analysis based on the genes of each non-malignant cell type. It was found that the VEGFA functional agent gene can distinguish between div-high and div-low TECs, TAMs and CAFs, but not T cells (Figure 4I). 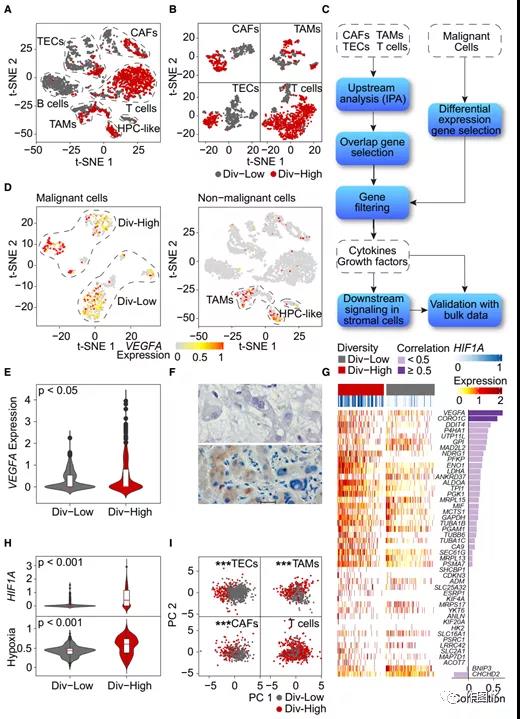 The results showed that the branches of CD8+ and CD4+ T cells came from the trajectory tree, where div-high T cells tended to cluster on the trunk, while div-low T cells clustered on the branches (Figure 5B). 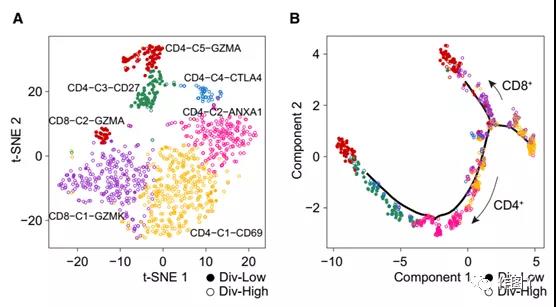 This article conducts gene set enrichment analysis based on signaling pathway genes. The enrichment pathways between CD8+ and CD4+ T cells are basically the same (Figure 6A).

In addition, T cells are enriched in the interferon-a (IFN-a)/IFN-g response and MYC activation pathway, as well as the cell proliferation (G2/M checkpoint and E2F target) pathway, suggesting div-low tumor T cells May have cytolytic activity.

Compared with div-high tumors, cytotoxicity-related genes (such as GZMA, GZMB, GZMH and PRF1) from div-low tumor CD8+ and CD4+ T cells were highly expressed (Figure 6B and 6C). 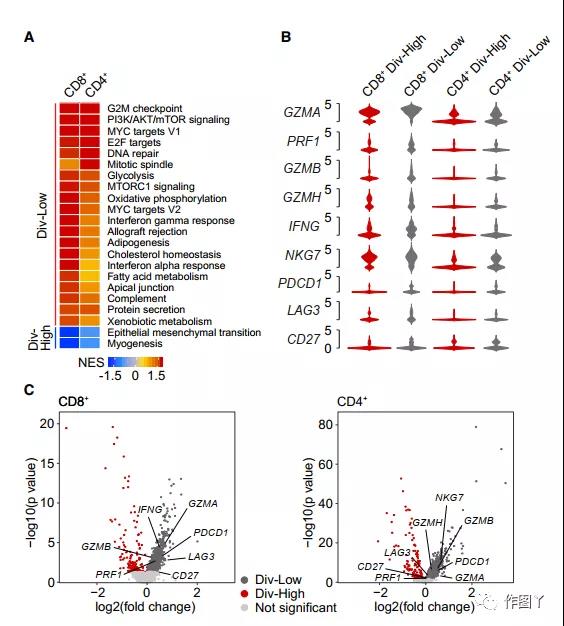 Summary: The diversity of tumor cells drives the reorganization of the liver cancer microenvironment

Liver cancer is the second most deadly malignant tumor in the world, mainly including hepatocellular carcinoma (HCC) and intrahepatic cholangiocarcinoma (iCCA).

However, most patients with HCC and iCCA have limited response to molecular targeted therapies.

This article develops a method to measure tumor cell diversity and proves that tumor transcriptome diversity is related to the overall survival of HCC and iCCA patients treated with immune checkpoint inhibitors.

This work also found that TME polarization, including T cell dysfunction, is related to the increased expression of tumor-derived VEGF.

These results indicate the utility of the transcriptome diversity score in predicting the response of immunotherapy, and provide a theoretical basis for the combination of immune checkpoint blockade and antivascular therapy to improve the efficacy.