Biotechnology and Pharmaceutical industry on mRNA technology.  In the current COVID-19 epidemic, mRNA technology has become the most dazzling star on the stage. Many experts also said that mRNA technology is expected to win the next Nobel Prize. But until the British government approved the emergency use of Pfizer and BioNTech’s COVID-19 vaccine, this technology has not yet produced a vaccine or therapies have been widely used.

The scientific research team from the British Epidemic Prevention Innovation Alliance (CEPI) published a titled “The promise of mRNA vaccines: a biotech and industrial perspective” in the npjvaccines of “Nature”, looking at the prospects of mRNA from the perspectives of biotechnology and industry. .

They believe that the mRNA manufacturing process begins with the production of plasmid DNA (pDNA), which contains a DNA-dependent RNA polymerase promoter, such as T7, and the corresponding mRNA construction sequence. The pDNA is linearized to serve as a template for DNA-dependent RNA polymerase to transcribe mRNA, which is then degraded by DNase processing steps. The addition of 5’cap and 3’poly(A) tails can be achieved enzymatically in steps 7 and 8 of in vitro transcription or after transcription. Step 9 can produce Cap 0 (N7MeGpppN) or Cap 1 (N7MeGpppN2′-OMe) structure by using guanylate transferase and 2′-completed enzymatic addition of cap O-methyltransferase, and the poly-A tail can be It is obtained by enzymatic addition by poly-A polymerase.

Once released into the cytoplasm, the design of the mRNA construct for vaccination is to effectively utilize the translation machinery of the host cell to produce a sufficient amount of the encoded immunogen, which is appropriately presented to the immune system. Throughout the field, several key quality attributes have been and will continue to be the focus of work to maximize gene expression (Figure 2). First of all, the purity of mRNA is a key determinant of yield.

It is well known that DNA-dependent RNA polymerase produces smaller oligoribonucleotide impurities due to the initiation of abortion and the double-stranded (ds) RNA produced by itself. -A complementary 3’extension, which can lead to the production of type I interferons and inflammatory cytokines through pattern recognition receptors. Previously, Dr. Karikó and others from the University of Minnesota in the United States proved that removing contaminants in mRNA preparations can reduce innate immune responses and lead to a significant increase in protein expression levels in vitro. 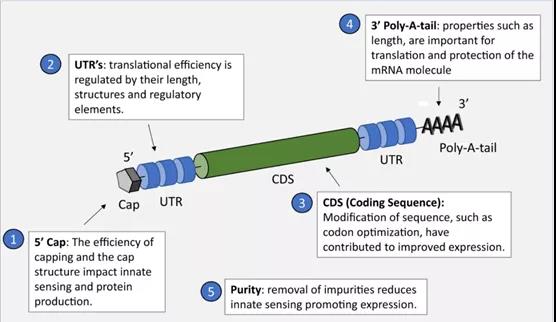 In addition to optimizing the structure of the mRNA, it is also important to transport the mRNA vaccine from the boson at the injection site to the cell cytoplasm to initiate transformation. Since mRNA is essentially a transient molecule, it is easily degraded mainly by nuclide activity, so it needs effective protection. Lipid nanoparticles (LNP) are currently becoming the leading category in this field. There are many examples showing that through the use of LNP for treatment, mRNA and vaccine applications have been successfully delivered.

The focus of the continuous development of this LNP carrier system is mainly related to the optimization of the capacitive lipid component, especially focusing on the acid separation constant (pKa) and the refinement properties (capacitive component and auxiliary lipid), which have been proven to be effective in the cytoplasm. Play a key role in entry and cargo release. The next generation of LNP may include specific target patterns for the cultivation and absorption of specialized antigen-presenting cells (such as blast cells). Conjoined DC receptors can be embedded on the surface of LNP to target these cells and promote the presentation of antigens to the immune system.

From the perspective of biotechnology and industry, the author believes that:

1. A further understanding of the molecular mechanism of action will guide the further improvement of mRNA structure and formulation. Other sites in the mRNA construct can also be used for optimization. The new cap structure focusing on base or sugar modification produces higher translation properties by increasing ribosomal interaction or enhanced stability. The stability of mRNA can also be achieved by various modifications of the triphosphate bridge in the cap structure.

2. Translational science will provide information for preclinical and clinical research to facilitate rapid reduction in the selection of constructs and formulations. A key aspect of vaccine development efforts is the goal of making early informed decisions based on objective data that is beneficial or detrimental to specific candidates. The lack of recognition that the multi-antigen vaccine approach is a major challenge in the decision-making process. Therefore, for a given dose, multiple antigen candidates require large amounts of LNP. It is known that LNP has inherent adjuvant properties. Therefore, safety and tolerability may limit the multi-antigen approach, where translational science is essential for development.

3. Challenges faced by clinical trials. From a clinical perspective, the current focus is on related optimization (immunogenicity and efficacy) by optimizing indicative expression and/or increasing the quality attributes of delivery, while reducing the risk (safety) characteristics of candidate mRNA vaccines. Obviously, immune activation can be beneficial or harmful and must be evaluated accordingly. Therefore, given that several cells of innate immune response sensors are activated by RNA, it is necessary to design an early clinical trial that can properly capture all the inherent inflammatory components of mRNA vaccines.

As the field gains more data from early human studies, the focus of mRNA vaccines will shift from documenting local and systemic tolerance to capturing potential long-term safety. Unfortunately, detecting safe signals for uncommon adverse events requires thousands of subjects. As with new adjuvants, sufficient safety databases to ensure that the safety of candidate mRNA vaccines may be in the range of tens of thousands. Given that different manufacturers are using different strategies to optimize their vaccine candidates, the conclusion of a candidate may not be generalized. Therefore, each candidate vaccine may have to independently prove that its risk/benefit status is good. 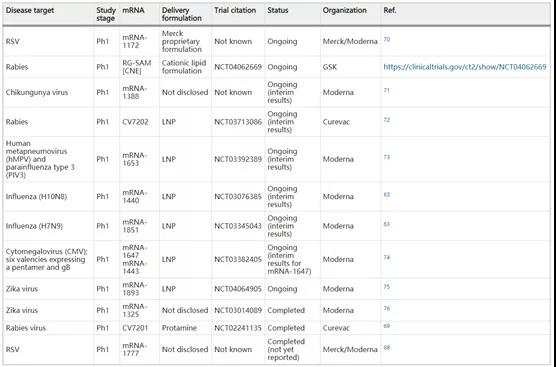 The nature of mRNA technology allows the use of almost unlimited combinations of derivatives for rapid purification in pursuit of optimization. This requires the application of translation science to accelerate the selection of the best structure and formula for subsequent development. The clinical experience in the last two years is based on a large amount of pre-clinical data.

These trials have taught us that the optimal balance between immunity and inflammatory activation needs to be found to establish acceptable risk/benefit characteristics for a given vaccine. Whether the clinical results from different participants can be generalized to mRNA technology and preparations remains to be determined.

In general, with major advances in mRNA biology, delivery, and manufacturing, the biotechnology and vaccine industries are expected to make further investments in the development of new products.