Overview of Oncolytic Viruses.  With the improvement of life science and technology, many new popular therapies have emerged in the treatment of tumors and cancers. In addition to single/double antibodies, ADC (antibody conjugated drugs), PD-1/L1, cell therapy, exosomes, and oncolysis Viruses have also become treatments in this field. Among them, oncolytic viruses (OVs) have received more and more attention from scientific research and industry because of their ability to replicate specifically in tumor cells and cause tumor cell lysis without affecting normal cells.

OVs are a class of natural or genetically engineered viruses that can selectively replicate in tumor tissues, and then infect and kill tumor cells or cause tumor cell lysis, but have no killing effect on normal tissues. According to whether they have undergone genetic modification, they can be divided into two categories: one is wild-type virus strains and natural attenuated virus strains, such as reovirus, Newcastle disease virus, etc.; The viruses that multiply in tumor cells mainly include adenovirus, herpes simplex virus, vaccinia virus, and measles virus.

In the early 20th century, there were cases of remission or recovery of tumor patients with virus infection, which aroused the curiosity of researchers, and then the concept of oncolytic virus and related research was born.

In the mid-to-late 20th century, researchers began to use immunization or viral infection to treat cancer and tumors and achieved certain results. However, due to the limited technology at that time, the clinic mainly used natural weak virus strains (varicella virus, measles virus, etc.). Such strains had limited killing ability on tumor cells, easily activated the host immune system to be cleaned up, and easily caused related complications. , It is difficult for researchers to effectively control the pathogenicity of the virus. At that time, chemotherapy and radiotherapy showed subversive effects, making oncolytic therapy neglected, and research fell into an underestimation.

In the late 20th century, with the continuous development of virology and genetic engineering technology, researchers were able to modify virus genes, which greatly improved the effect, specificity and safety of oncolytic viruses in tumor treatment. After that, the oncolytic virus ushered in a new era of tumor treatment.

Among them, adenovirus, herpes virus, vaccinia virus and measles virus are the most commonly used.

The mechanism of action of oncolytic viruses

Oncolytic viruses (OVs), as the name suggests, “oncolytic” is to “dissolve” (that is, kill) tumors, and achieve anti-tumor effects mainly through the dual mechanism of infecting and selectively killing tumor cells and inducing systemic anti-tumor immunity.

The mechanism by which oncolytic viruses enter cells

Many oncolytic viruses currently in the clinic have a natural tropism for cell surface proteins abnormally expressed by cancer cells, which has become a favorable way for oncolytic viruses to enter tumor cells. 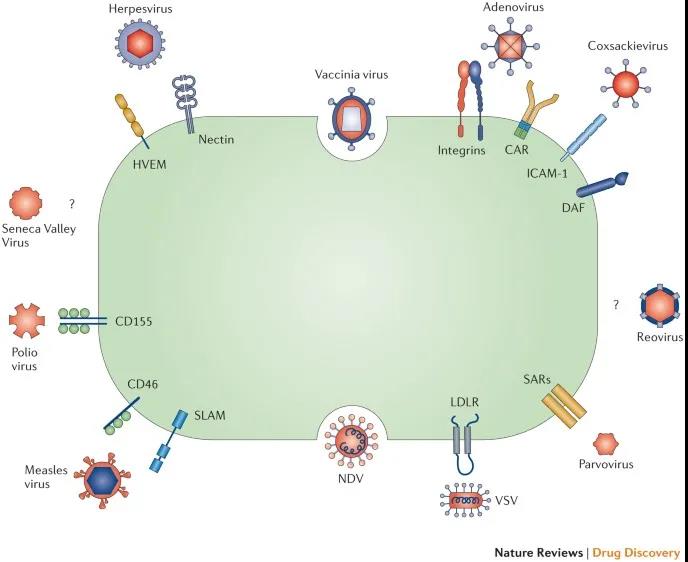 For example, herpes simplex virus type 1 (HSV-1) enters cells through HVEM (herpes virus entry medium, also known as TNFRSF14). These surface receptors are overexpressed in certain cancer cells, including lymphoma and melanoma And other cancers. Measles virus can use the surface receptor CD46 to enter cells; CD46 usually prevents cell elimination by inactivating the immune system’s complement pathway, and is often overexpressed in cancer cells. Coxsackie virus can enter cells through intercellular adhesion molecule 1 (ICAM-1; also known as CD54) and decay promoting factor (DAF; also known as CD55). This type of receptor is involved in a variety of multiple myeloma, melanin It may be overexpressed in cancers such as tumors and breast cancer.

The virus replicates in large quantities in tumor cells and lyses the cells. When the tumor cells rupture and die under the infection of the virus, the released virus particles further infect the surrounding tumor cells.

(2) In situ vaccines and remote effects:

The lysis of tumor cells leads to the massive release of tumor-associated antigens (TAA), which in turn recruits more immune cells such as dendritic cells (DC) to infiltrate The tumor locally activates the anti-tumor immune response and acts as an “in situ vaccine”. Oncolytic viruses can also use “in situ vaccines” to promote the regression of remote uninfected metastases through cross-presentation, resulting in “remote effects.”

There are receptors (such as Toll-like receptors) in or on the cell, which can recognize the nucleic acid or protein of the virus, induce the expression of cytokines, and the expressed cytokines bind to receptors on other cells, resulting in Expression of antiviral genes and recruitment of immune cells.

After the virus lyses the tumor cells, the released tumor-specific antigens are presented by the DC, and the DC cells recruit and activate CD8+ and CD4+ T cells, thereby inducing antigen-specific T cell killing.

The growth of tumors depends on the tumor vascular system to provide nutrients. Therefore, if the tumor vascular system can be destroyed, the growth of the tumor can be effectively inhibited. Compared with other treatment methods, the characteristics of oncolytic virus destroying tumor blood vessels make it have obvious advantages in tumor treatment. Studies have shown that Vesicular Stomatitis Virus (VSV) can directly infect and destroy tumor blood vessels in the body by intravenous administration, without affecting normal blood vessels. 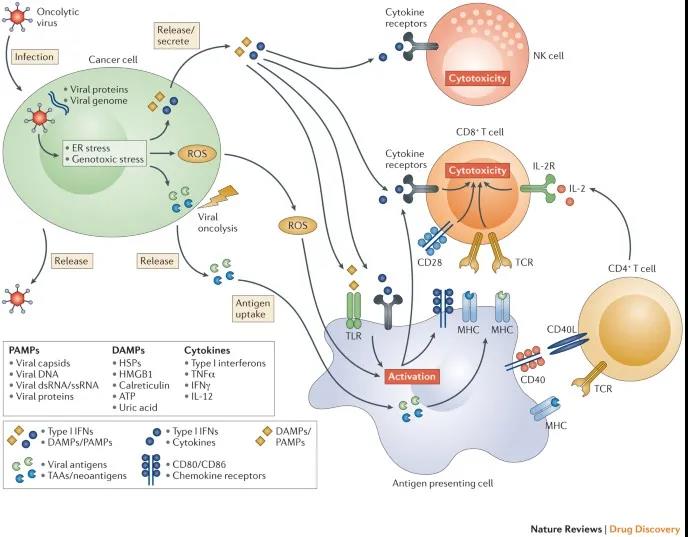 Among them, the induction of systemic anti-tumor immunity seems to be a key factor for oncolytic viruses to eliminate tumors. After the oncolytic virus lyses the tumor cells, it releases antigens related to tumor cells and other molecular signals related to cell danger (such as PAMPS, DAMPS, etc.). These antigens and molecular signals can be used to promote the body’s adaptive immune response. It can also mediate the above-mentioned “remote effect”, which allows the body to carry out a series of anti-tumor immune responses.

The systemic route of administration (such as intravenous injection), as a second-generation oncolytic virus drug, has obvious advantages in metastasis, and has more clinical application prospects and commercial value. It is the current and future research and development trend. However, this approach may also cause oncolytic viruses to accumulate in organs in the body, making it difficult to take effect. In addition, it is necessary to overcome obstacles such as blood neutralizing antibodies, complement, and non-specific binding of red blood cells to reach the lesion. The virus is cleared.

At present, studies have found that oncolytic virus drugs have great development prospects in the field of combined immunotherapy, traditional radiotherapy, chemotherapy and other combination drugs due to their advantages in multiple ways of killing tumor mechanisms. Among them, combined immunotherapy has shown strong therapeutic potential in clinical trials. Because oncolytic virus genomes have different structures, gene organization, expression strategies, and replication mechanisms, and there are differences in the ability of virus lysis, inducing innate and adaptive immune responses, the choice of oncolytic viruses and their combined partners in combination therapy Many factors need to be considered.

The fastest clinically progressing oncolytic virus combination therapy is combined immunotherapy. With the research and application of immune checkpoint inhibitors (ICB) such as PD-1/PD-L antibodies, using the immune system to kill tumors has become the focus of cancer treatment. Oncolytic virus combined immunotherapy can induce a large number of immune cells to infiltrate the tumor, change the tumor microenvironment, and enhance the anti-tumor activity of immunotherapy. Effective immunotherapy depends on the immune response in the tumor microenvironment and mainly involves three aspects:

ICB has a high level of tumor-infiltrating lymphocytes, a high mutation burden, and has the strongest anti-cancer effect in tumors with increased PD-L1 expression. Such responsive tumors are immunologically called “hot tumors”, and compared with Relative “cold tumors” cannot be treated by ICB due to lack of tumor-related antigen expression and/or presentation, low density of TILs, and expression of immunosuppressive substances.

In clinical trials, two blockbuster studies demonstrated the powerful efficacy of the combination therapy of oncolytic viruses and immune checkpoint inhibitors. In September 2017, the internationally renowned journal “Cell” published a blockbuster clinical data on the combination of PD-1 antibody Keytruda and oncolytic virus therapy T-vec in the treatment of melanoma patients. The results show that the combination therapy can increase the patient’s response rate to 62%, which is much higher than the expected remission rate of Keytruda or T-vec therapy alone (usually about 35%-40%). In October of the same year, the global biopharmaceutical giant Amgen also announced the latest clinical data of an oncolytic virus T-vec combined with the checkpoint inhibitor CTLA-4 antibody Yervoy for the treatment of melanoma. The results showed that the overall response rate of the combination therapy was doubled compared to Yervoy monotherapy.

Then, CD19 CAR-T cells were combined with OV19t in vitro and tested in mice. The study found that tumor cells were widely killed, OV19t and CD19 CAR-T produced a strong synergistic effect, cured more than half of the mice, 60% of the mice were completely relieved, and only 22% of the mice that received OV19t treatment alone The tumor subsided completely.