Method for determining the killing potential of CAR-T cells in vitro.  The use of chimeric antigen receptor (CAR) modified T cells for immunotherapy has been shown to be effective in the treatment of leukemia and lymphoma that are resistant to chemotherapy.

Recent clinical studies have shown that CAR-T cells have an excellent response in a variety of B-cell tumors.

However, it is important to verify the in vitro activity of these cells by various assay methods that can determine the cytotoxic potential of these cells.

In this article, two methods for assessing the killing potential of CAR-T cells against B cell malignant cell lines will be pointed out.

B-cell carcinoma is a heterogeneous group of hematological diseases, most of which respond to chemotherapy. Despite this, many patients are known to have relapsed.

Therefore, due to the difficulties encountered in the treatment of patients with recurrence of B-cell malignant tumors, efforts are needed to develop more specific and less toxic therapies [1].

The expression of CD19 is limited to all stages of B cell development, until the final differentiation into plasma B lineage cells, and is not expressed in hematopoietic stem cells [2, 3].

This antigen is expressed in tumor cells of most B-cell malignancies, such as lymphoid leukemia progenitor B cells [4, 5].

Therefore, the glycoprotein can be considered as an interesting target for immunotherapy against tumor B cells.

Advances in genetic engineering and a better understanding of T cell recognition have led to the development of synthetic receptors for tumor antigens, called chimeric antigen receptors (CAR), which have been initially coupled with autologous T cells as cancer treatments Alternative method [6].

Structurally, CAR has an extracellular binding domain, usually an antibody single-chain variable fragment (scFv) and a transmembrane domain that anchors the receptor on the cell membrane. This domain is connected by two chains and binds to the intracellular model of TCR-like signal transduction that usually contains CD3 glycoprotein, thereby triggering T cell activation through specific antigen binding [7, 8].

The CAR binding to its target triggers the intracellular signal to the T cell mechanism through the signal domain (usually the CD3-ζ chain) [9].

The most common assays used to detect effector cell-mediated cell lysis usually include methods based on compounds that release radioisotopes, one of the most common is chromium (51Cr). The 51Cr determination method is most widely used due to its reliability and simplicity.

51Cr can specifically label Target tumor cells. After washing and centrifugation to remove excess 51Cr, the Effector immune cells are added for co-cultivation. After the Effector immune cells start the killing program, the Target tumor cells are lysed, and 51Cr is subsequently released into the supernatant and counted by Gamma The content of 51Cr released into the supernatant was detected by a meter or a liquid scintillation counter to evaluate the killing activity.

However, all radioactive materials have potential hazards, so it is very important to find alternatives to avoid or minimize risks [12]. 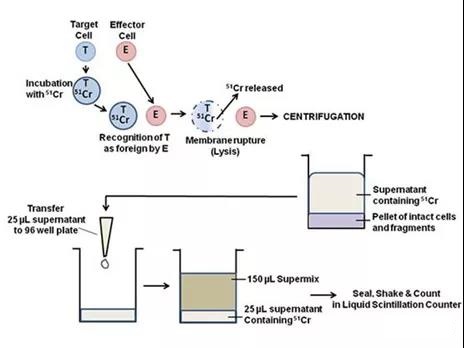 Another assay that is often used to measure cell-to-cell or compound-dependent cytotoxicity is the determination of lactate dehydrogenase (LDH) [18]. LDH is a common cytoplasmic enzyme in vertebrate organisms, which is responsible for balancing the reaction between NAD+ and lactic acid to generate NADH and pyruvate [19]. LDH is present in almost all cells. When the plasma membrane is damaged, for example, due to the contact of cytotoxic compounds with the cell, LDH will be released into the extracellular space [20].

In the LDH-Glo detection protocol, LDH detection reagents (including lactate, NAD+, reductase, reductase substrate and Ultra-Glo™ luciferase) are added to the diluted cell culture medium sample. If the sample contains LDH, the enzyme-linked reaction shown in Figure 1 starts and proceeds at the same time. The resulting luminescence signal is proportional to the amount of LDH in the sample. The signal increases until all the reductase substrate is consumed and the reaction signal is no longer within the linear range of the assay.

Similar to LDH, CytoTox-Glo method. It is similar to the traditional LDH method. Its principle is that the target cell will release a dead cell protease when the target cell is killed. This protease binds to a cell impermeable peptide substrate-amino luciferin (AAF), and then uses Recombinant luciferase specifically catalyzes the amino luciferin product to produce “glow-type” luminescence, and the intensity of the luminescence is proportional to the number of cells undergoing cytotoxic effects, so as to evaluate the killing effect of effector cells. 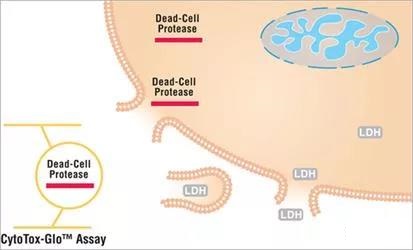 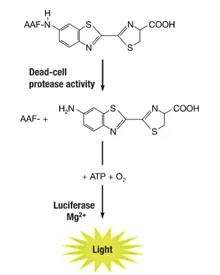 In addition, many label-based non-radioactive assay methods have been developed, such as calcein-AM (acetoxymethyl ester of calcein) [13]. However, the assessment of cell damage by flow cytometry aims to provide a more accurate characterization of death pathways by detecting the percentage of apoptotic and dead cells [12, 14].

One of the characteristic events of the apoptotic pathway is the change of the plasma membrane structure [15]. During early apoptosis, typical membrane compounds (such as phosphatidylserine (PS) molecules) redirect from the inner surface of the cell membrane to the outer surface without losing its integrity.

Annexin V-FITC is a molecule with high affinity for PS, which can be used to label cells in an early apoptotic state, while propidium iodide (PI) indicates late apoptosis or cell death, which makes the labeling The detection of substances in cells is more interesting to determine the cytotoxicity mediated by [16].

In addition, the labeling of target cells can assess specific cell death. Lipophilic membrane dyes, such as PKH67 or PKH26 for labeling target cells, can better characterize the cytotoxicity of specific effector cells [17].

Using different cytotoxicity assays will be able to assess the lethality of tumor-specific cytotoxic T lymphocytes modified with CD19-specific chimeric antigen receptors and their specific functions and any correlation with clinical response.

It is important to analyze the cytotoxic activity of CAR-T in vitro to verify its activity and as a first step for testing these cells in an in vivo model of CD19+ B-cell carcinoma.