Big data of 3.5 million people reveal that obesity is associated with the risk of 26 cancers

Obesity is associated with the risk of 26 cancers.  In modern society, with economic development and technological progress, people’s living standards have been greatly improved, and the obesity rate has shown an upward trend all over the world.

It is worth noting that obesity is also closely related to the occurrence and development of some diseases, including type 2 diabetes, cardiovascular disease and cancer.

At the same time, in recent years, due to the increase in average life expectancy, industrial pollution and ionizing radiation and other complex factors, the incidence of cancer in the world has also been increasing year by year.

In this regard, what is the relationship between obesity as an increasingly popular metabolic disease and the occurrence and development of cancer?

In January 2021, researchers from the University of Barcelona in Spain published a titled “Body mass index and waist circumference in relation to the risk of 26 types of cancer: a prospective cohort study of 3.5 million adults in Spain” in the journal BMC Medicine. Research papers.

This large study of 3.5 million people showed that obese people with a higher body mass index (BMI) have an increased risk of 12 cancers, and among non-smokers, BMI is also positively correlated with the risk of blood cancer and head and neck cancer. .

In addition, studies have confirmed that body mass index (BMI) and waist circumference (WC) are similar in assessing cancer risk associated with obesity.

In the past 30 years, the worldwide prevalence of obesity has nearly tripled and reached a staggering 650 million people in 2016. Body mass index (BMI) is a commonly used international standard to measure the degree of body weight and health.

In addition, central fat, which is usually assessed using waist circumference (WC), has also been found to be associated with the risk of several cancer types.

Therefore, studying whether body mass index and waist circumference are related to the risk of many cancer types is a study worthy of discussion.

In this study, the research team conducted a large prospective cohort study based on population-based electronic health records in Catalonia, Spain. Between 2006 and 2017, the researchers included 3,658,417 cancer-free adults, and analyzed and screened 26 different cancer types to determine their cause-specific risk ratios (HRs). 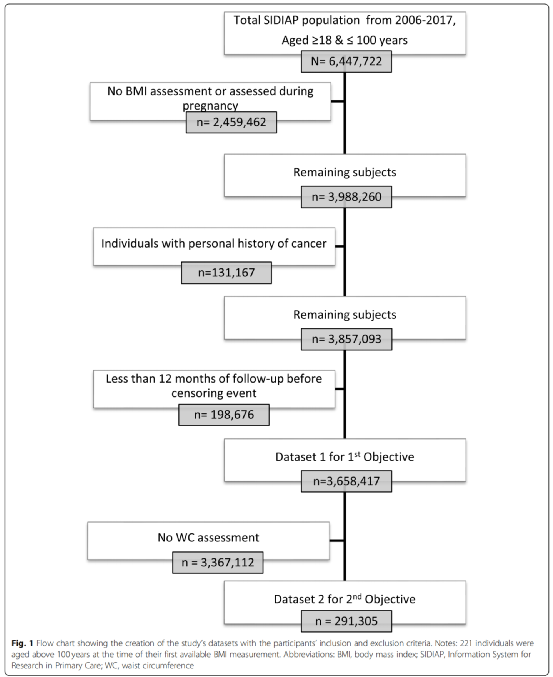 Subsequently, the researchers followed these participants for an average of 8.3 years of long-term follow-up, of which more than 200,000 (202,837) participants were diagnosed with cancer. Statistical analysis shows that a higher body mass index (BMI) is associated with 9 types of cancers, including: uterine cancer, kidney cancer, gallbladder cancer, thyroid cancer, colorectal cancer, postmenopausal breast cancer, multiple myeloma, leukemia, and non-Hodgkin Chikin’s lymphoma. 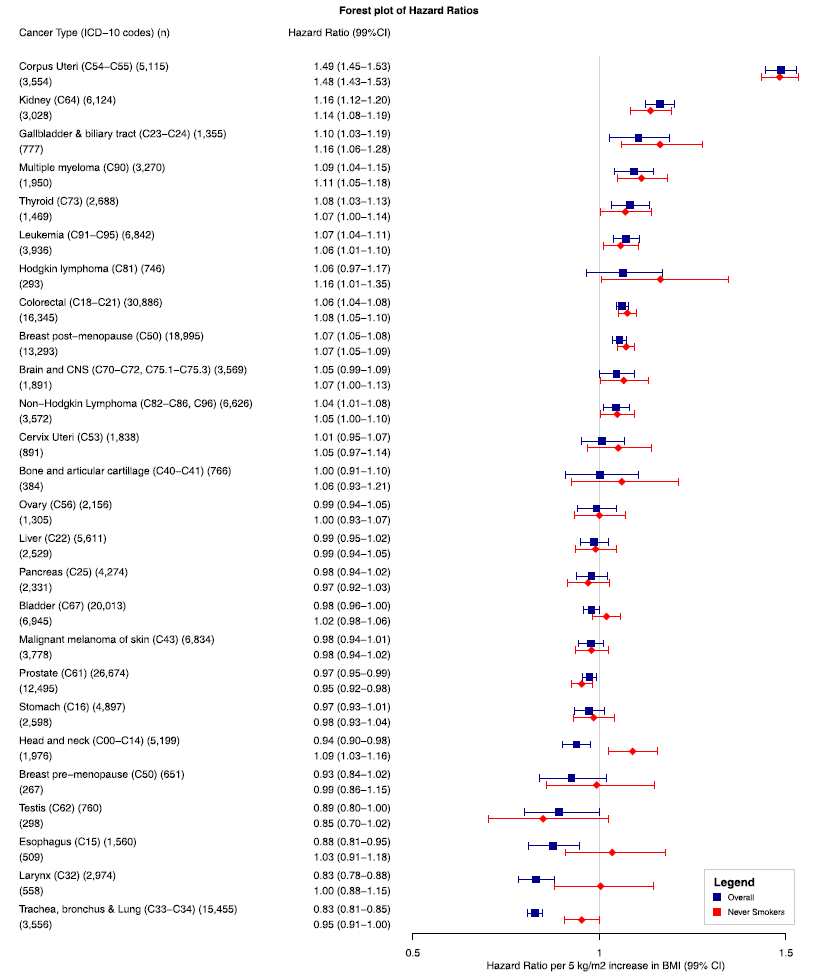 In addition, of the 291,305 participants who measured waist circumference, 27,837 were diagnosed with cancer. Research data shows that the correlation between body mass index (BMI) and waist circumference (WC) and cancer risk is highly overlapped in all cancers.
image
BMI and WC are comparable in the estimation of cancer risk associated with obesity at the population level

In summary, this study shows that the higher the body mass index (BMI), the higher the risk of 12 cancers, but the risk of developing the other 5 cancers related to smoking factors is lower, and it is in people who have never smoked Among them, a higher BMI also increases the risk of blood cancer and head and neck cancer. In addition, the study also proves that body mass index (BMI) and waist circumference (WC) are comparable to the estimates of obesity-related cancer risk at the population level.