The viral outgrowth assay (VOA) underestimates the HIV virus pool because it fails to induce all replication-competent HIV proviruses (provirus, that is, HIV in which the viral genome is integrated into the host cell DNA).

HIV DNA tests for a single area or two areas of HIV (called single-test and double-test, respectively) overestimate the HIV virus pool because these tests fail to exclude many defective HIV proviruses.

PCR-based testing methods are highly sensitive and require less blood than VOA. However, in the PCR test method, people usually test for a single conservative target, which will greatly overestimate the size of the HIV virus pool that has the ability to replicate.

This is because most of the HIV integrated into the host cell DNA Proviruses are all defective, and PCR testing for a single target does not distinguish between intact HIV proviruses and HIV proviruses with DNA deletion and/or inactivation mutations.

Reliable estimation of a genetically complete HIV provirus requires verification of the existence of multiple regions on the HIV genome and whether the target sequence in each region tested comes from the same HIV provirus.

Droplet digital PCR (ddPCR) provides an alternative option. In ddPCR, the PCR reaction solution (including template DNA) is divided into thousands of individual droplets, and the PCR detection results of each droplet are reported separately. A ddPCR assay protocol reported in 2019 uses such multiple methods to detect two regions of the HIV-1 genome in each droplet.

This extra step is particularly useful for tissue biopsy, because the cell population in the tissue is difficult to separate and purify compared to blood. The relevant research results were published in the journal Cell Reports Medicine on April 20, 2021, with the title of the paper “A highly multiplexed droplet digital PCR assay to measure the intact HIV-1 proviral reservoir”. 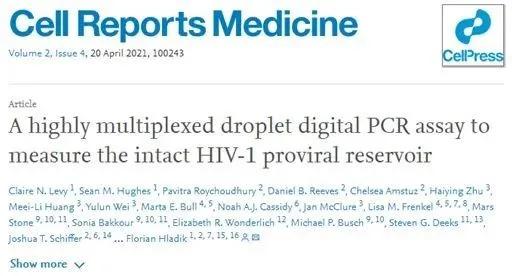 Of the three HIV targets in each assay method, two use the same dye for probe detection, but at different concentrations, so that different HIV targets can be distinguished on the X/Y graph of fluorescence amplitude. This allows these authors to quantitatively determine droplets containing different combinations of targets. 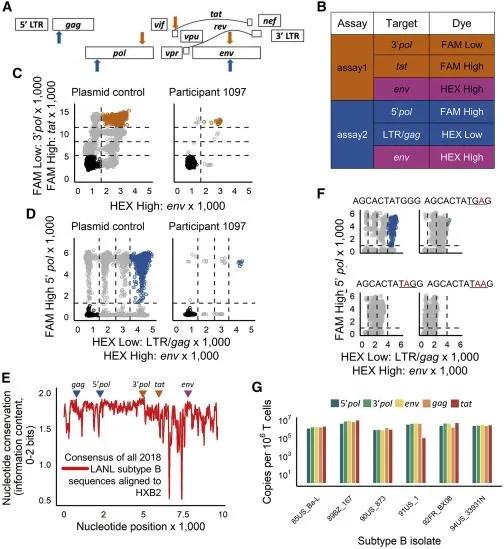 These authors used this 5-region test method to assess the number of HIV proviruses contained in these 5 regions. The number of HIV proviruses they estimated was 12.1 times higher than the matched quantitative VOA method and correlated with the latter (Spearman’s ρ = 0.48), but their estimated HIV virus pool was significantly less than the previous DNA measurement method.

The authors used their test methods on longitudinal blood samples and mucous membrane samples from HIV-infected individuals who were treated with antiretroviral drugs (ART).