ICOSL is related to the enhancement of pattern recognition receptor signals in dendritic cells, the induction of IL-10 production by CD4 T cells, and the production of high-affinity antibodies against specific antigens, all of which may explain its involvement in gastrointestinal inflammation.

In a recent study published in the journal PNAS, Craig L. Maynard’s team from the University of Alabama at Birmingham found that a lack of mouse ICOSL can lead to a large amount of IL-10 production and a large number of CD4 T cells. Set, especially in the proximal area of ​​the large intestine.

The deficiency of ICOSL in adult mice leads to insufficient secretion of IL-10 and induces severe colonic inflammation, which can be alleviated by metronidazole treatment.

The levels of IgA and IgG antibodies in the colonic mucus of ICOSL-deficient mice have decreased, and their ability to recognize microbial antigens (including flagellin derived from the flagellinaceae mucus-related bacteria) has also decreased. The lack of ICOSL and the deletion of the CD4-specific Il10 gene further led to spontaneous colitis in young mice. 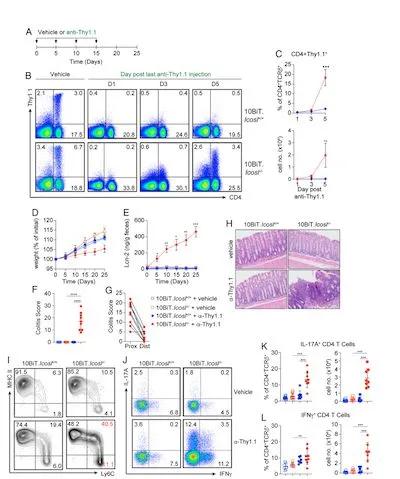 In this study, the authors first compared the occurrence and development of enteritis in ICOSL-deficient mice with transient IL-10 loss. Through anti-Thy1.1 antibody-mediated elimination of IL-10 secreting cells, the authors found that the level of CD4 effector cells in the mouse intestine increased significantly, accompanied by an increase in the severity of intestinal inflammation. 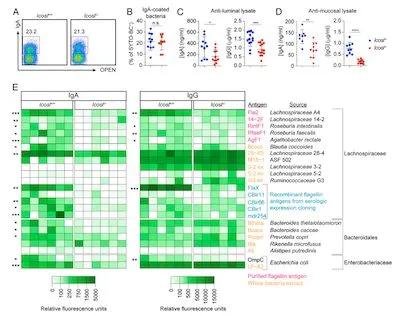 Furthermore, the authors found that the absence of ICOSL will naturally increase the level of IL-10 secreting cells, but the level of antibodies that recognize commensal bacteria in the intestine is significantly reduced, and this trend is more pronounced in the proximal intestine. By analyzing the composition of antibodies, the authors found that these affected antibody molecules are mainly responsible for recognizing antigen targets derived from intestinal commensal bacteria.

On this basis, the author provided mice with antibody and IL-10 dual therapy. The results show that the combination of the two can significantly close the intestinal homeostasis of the mouse early in life. The above-mentioned antibodies are not only derived from the mother but also from the host itself in the natural state.

In summary, the above findings reveal the partnership between ICOSL-dependent anti-commensal antibodies and IL-10 in the adaptive immune regulation of the colonic microbiota. In addition, the authors believe that ICOSL-deficient mice may help to explore the role of antibodies in host-flora symbiosis.