Cell Metabolism: Food coloring (Red 40) was found to promote the occurrence of enteritis

Food coloring (Red 40) was found to promote the occurrence of enteritis.  This study is based on a mouse model, and whether similar effects will be observed in humans remains to be further evaluated.

In daily life, food, medicines and beverages may contain a variety of pigments. Among them, Allura Red (Red 40) is a red azo dye. A large number of safety tests believe that Allura Red has no adverse cytotoxic, carcinogenic, or mutagenic effects, so it is approved as a food color additive in many countries.

Inflammatory bowel disease (IBD) is a chronic non-specific intestinal inflammatory disease, and its incidence is increasing year by year. Over the past few decades, the widespread use of food additives in human diets is believed to be related to the increase in the incidence of inflammation and autoimmune diseases, but how they work is currently very limited.

On May 13, 2021, a team from the Institute of Precision Immunology at Icahn School of Medicine at Mount Sinai in New York published an online article titled Food colorants metabolized by commensal bacteria promote colitis in mice with dysregulated expression of interleukin-23 on Cell Metabolism. research paper. The study found that food coloring can promote the occurrence of colitis when the expression of the inflammatory factor IL-23 is elevated. 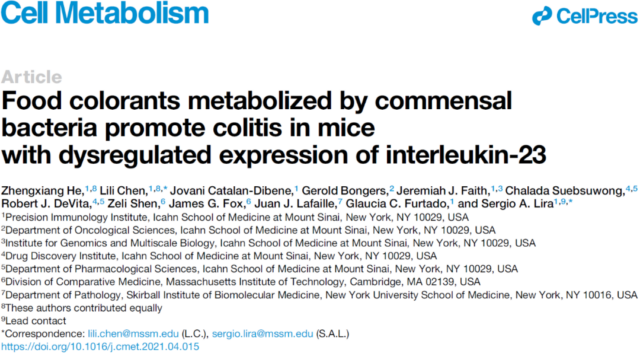 IL-23 is an inflammatory cytokine. A large number of studies have found that IL-23 plays a key role in the development of enteritis. However, only up-regulating the expression of IL-23 is not enough to induce the occurrence of enteritis.

In a previous study, the authors constructed a mouse that can conditionally express IL-23 (R23FR). After being induced by tamoxifen (TAM), the myeloid cells of R23FR mice will overexpress IL-23 . The authors found that when fed a standard diet (Labdiet 5053), the mice did not develop colitis, but when the mice were fed a customized diet (Diet 2019), the occurrence of colitis could be observed.

However, many previous safety tests have proved the safety of Allure Red. Does the author’s discovery contradict previous research?

The authors found that if Allure Red is given before IL-23 induction, subsequent treatment with IL-23 and Allure Red will not induce the occurrence of enteritis, because under normal conditions, Allure Red can induce Treg cell-mediated tolerance Occurs, and the increase in IL-23 expression prevents this process.

IL-23 can regulate the production of cytokines IL-17, IL-22 and IFN-γ by CD4+ T cells. In order to find out whether these cytokines will affect the process of enteritis, the authors used antibodies or gene-deficient mice to explore. It was found that CD4+ T cells that secrete IFN-γ play a key role in the occurrence of enteritis. 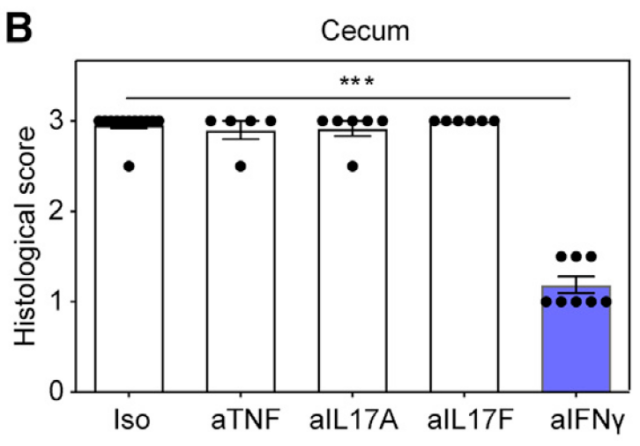 Intestinal microbes play a key role in the occurrence of enteritis. Does Allure Red-induced colitis require the participation of microbes? The author found that it did not induce enteritis in sterile mice, but 16S rRNA sequencing analysis found that Allure Red did not affect the changes in the composition of the gut microbe. These results indicate that Allure Red-induced colitis is dependent on gut microbes, but not on significant changes in its composition.

Further analysis found that B. ovatus and E. faecalis contributed to the occurrence of colitis in R23FR mice induced by Allure Red.

As an azo dye, Allura Red can be reduced and metabolized into CSA-Na and ANSA-Na in the gastrointestinal tract. The authors found that Bacteroides ovatus and Enterococcus faecalis can metabolize Allure Red to produce CSA-Na and ANSA-Na, of which ANSA-Na can promote the occurrence of enteritis, and this process also depends on the participation of intestinal microorganisms. In addition, sunset yellow, which is also an azo dye, also shows a similar mechanism of action.

This study found that under the combined action of the inflammatory factor IL-23, food colorings (such as allure red, sunset yellow and other azo pigments) contribute to the development of colitis in mice, suggesting that food coloring may cause inflammation One of the important environmental factors of enteropathy. 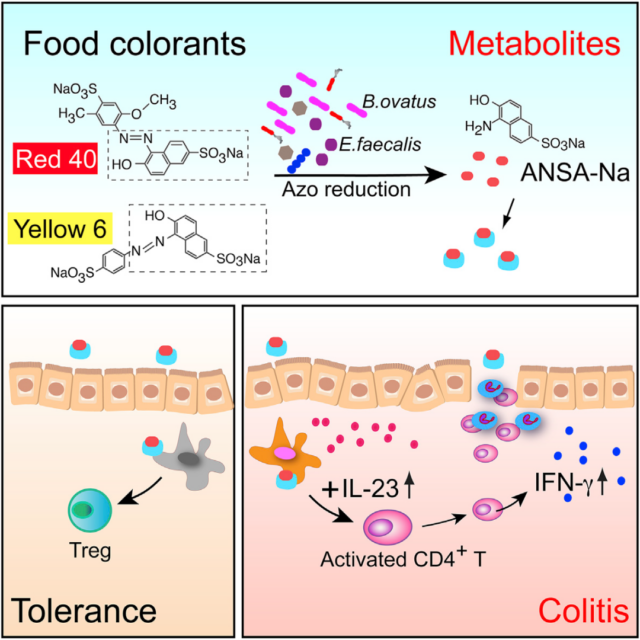 Of course, this study is based on a mouse model, and whether similar effects will be observed in humans remains to be evaluated. In addition, the focus of this study is that under the condition of abnormal expression of IL-23, food coloring