Immunology-Chapter 5: Antibody-Antigen Interaction. The figure above illustrates the subject of this chapter.

This chapter describes how antibodies interact with antigens in almost infinite shapes and how this interaction protects us from pathogens. This chapter also reviews the development of very specific diagnostic tests for the presence of antigens or antibodies. The most significant feature of antibody-antigen interactions is their specificity and affinity.

The extraordinary specificity and affinity of antibodies make them widely used in diagnostic tests. The second half of this chapter describes some of the most important applications of antibody-antigen interactions in the diagnosis of diseases.

For small molecule compounds, the antigen-binding site on the antibody is similar to the active site of an enzyme. Antibodies that recognize intact larger protein molecules are directed against epitopes. The epitope is a part of the protein antigen-that is, the binding site of the antibody-which may be a protruding surface rather than a crack or gap (see Fig 5.1). In all cases, there is chemical complementarity between antigen residues and antibody binding site residues.

The wall of the binding site is formed by the amino acid residues of the variable regions (VH and VL) of the heavy and light chains (VH and VL), called the hypervariable region (HV region; see Chapter 6). Antibody specificity is derived from the precise molecular complementation between the chemical group in the antigen and the chemical group on the antigen-binding site of the antibody molecule. 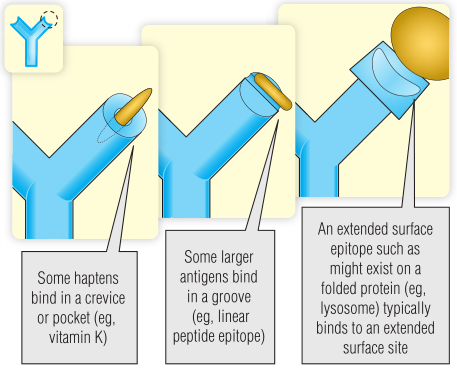 Fig 5.1 The size and shape of the antigen-binding site vary depending on the type of molecule or epitope it binds

An antibody occasionally binds to more than one antigen. This is called cross-reactivity or multispecificity. This antibody is specific to antigen 1, but it is sufficient to produce stable binding with another molecule, antigen 2 (Fig 5.2). The cross-reaction occurs because there is a sufficient number of chemical interactions between the antigen and the antibody to create a stable structure, regardless of the overall “goodness of fit”. It is worth noting that cross-reactions may have clinical consequences (BOX 5.1). 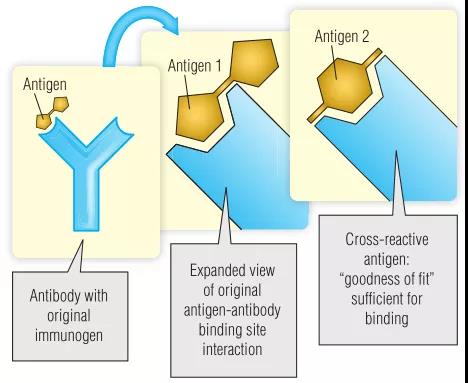 Diagnostic test for antibodies or antigens

Several commonly used diagnostic tests are based on the specificity and high affinity of antibodies. The rest of this chapter provides examples of how to perform different tests and describes the general principles of each test: these tests are both qualitative and quantitative, and help determine the presence of antigens or antibodies.

Enzyme-linked immunosorbent assay (ELISA) is a very sensitive and simple test, which uses covalent complexes of enzymes linked to antibodies to directly detect antigens or bind to antibody-antigen complexes (Fig 5.3). This experiment uses a plastic plate that binds the relevant antigen to the inside of the “hole”. The patient’s serum is incubated in these wells, and any relevant antibodies will subsequently bind to the antigen. The serum containing irrelevant antibodies is washed, but due to its high affinity, the antibodies bound to the antigen will not be interfered.

Finally, add a second antibody that can bind to the enzyme, which is extracted from the animal, and bind it to the patient’s antibody. This anti-human immunoglobulin will bind to the antibody still present in the well. The selected enzyme can catalyze the reaction to produce colored products from colorless substrates (such as alkaline phosphatase or horseradish peroxidase [HRP]; see Fig 5.3). Then, the amount of antibody bound to the antigen is directly proportional to the amount of colored final product that can be seen. Box 5.2 shows how to use ELISA to screen for infectious diseases. 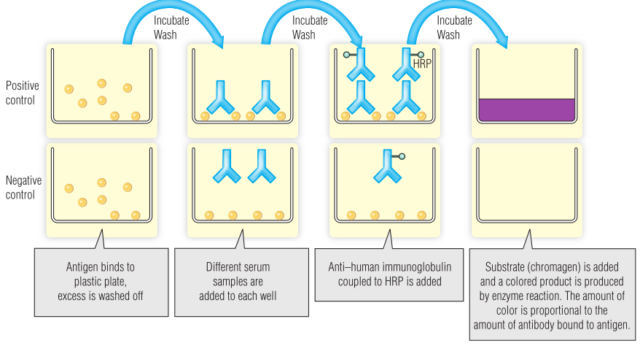 The lateral flow test is a simple test to determine the presence of proteins, antigens, or antibodies in body fluids. It has some similarities with the ELISA test, but it has been carefully designed to be very simple to use, does not require any special equipment, and is relatively cheap. Widely used in pregnancy tests, it confirms the presence of human chorionic gonadotropin (HCG) in the urine of pregnant women. 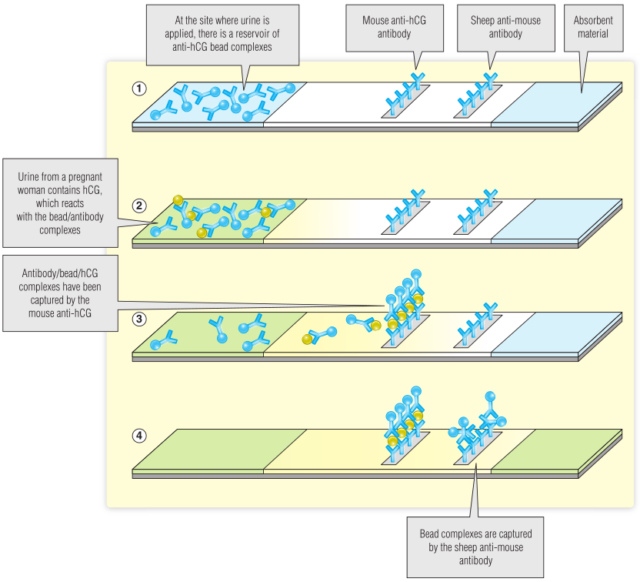 Fig 5.4 Sequence of events in which pregnancy bars test positive

Next, the urine antibody mixture reaches an area where secondary antibodies against different hCG epitopes have been immobilized on the paper. The antibody will bind to and capture any hCG-antibody-bead complex. If there is enough hCG, a colored line will form where the beads gather.

The pregnancy test needs to include a control to show that the test is satisfactory. For example, it is necessary to ensure the flow of urine along the pregnancy test stick and the presence of antibody bead complexes. In this example, the urine will next encounter the area of ​​the third antibody produced in the sheep, which is directed against mouse immunoglobulin. This will capture the last few beads and will produce a control line, indicating a successful test.

Fig 5.5 shows the positive and negative results of the pregnancy test, as well as the failed test (for example, when insufficient urine was used). 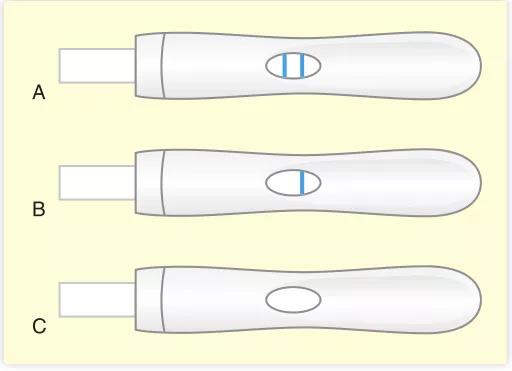 Immunofluorescence uses an antibody covalently linked to a fluorescent compound (fluorescein). One fluorescent compound widely used by immunologists is fluorescein isothiocyanate (FITC), which couples to free amino groups on proteins. When FITC is exposed to ultraviolet (UV) light, it emits green light. A fluorescence microscope equipped with an ultraviolet light source is used to examine samples exposed to fluorescent antibodies. This test is widely used to detect antigens in cells or tissue sections. It is also used to screen autoantibodies against cell or tissue antigens (Chapter 28).

Fig 5.6 uses fluorescein isothiocyanate (FITC) for direct (A) and indirect (B) immunofluorescence. Other fluorescent dyes can be used with different colors

Flow cytometry is a technique that counts cells expressing antigens. These cells are stained by antibodies specific for cell surface antigens. The antibody is conjugated to a specific fluorescent reagent, such as FITC (there are several other fluorescent colors to choose from), and then passed through the flow cytometer. The number of stained cells can be counted, such as the number of CD4+ T cells (Fig 5.7; see Chapter 35 for another example). 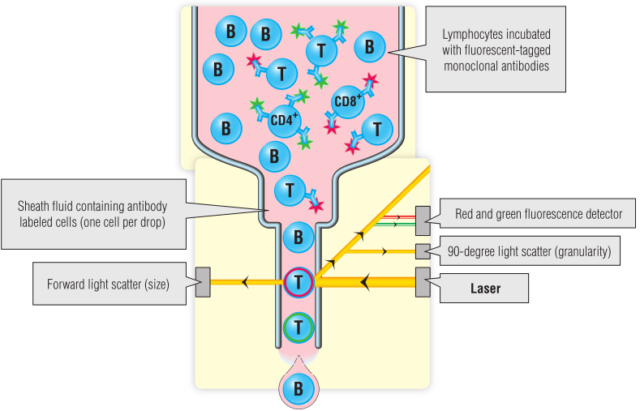 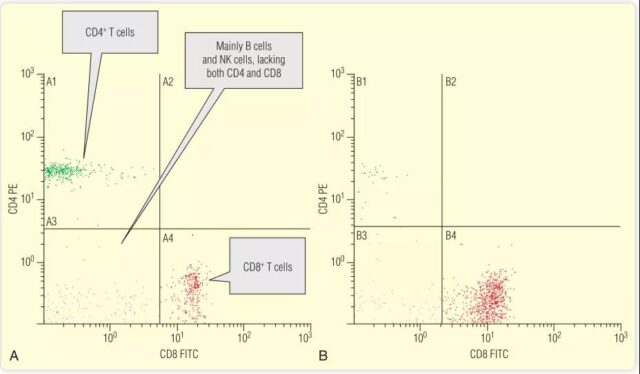 A 58-year-old woman was diagnosed with pneumonia and was in urgent need of antibiotics. About 20 years ago, the doctor prescribed penicillin for her sore throat. Within 30 minutes after she took the first capsule, she developed extensive skin rashes, breathing difficulties, and shock. Her attending doctor thought it might be a penicillin allergy attack. Doctors know that people who are allergic to penicillin should no longer receive penicillin treatment, and there is a risk of reaction of about 5% to 10% to other antibiotics of the β-lactam class, such as some cephalosporins and carbapenems. He decided to treat the patient with erythromycin. The molecular structure of erythromycin is very different from penicillin. The patient responded well to this antibiotic without side effects.

Adverse immune responses to drugs, especially antibiotics, can be a major medical problem. Penicillin can form a hapten carrier conjugate with its own protein, and then act as an immunogen to produce immunoglobulin E (IgE) antibodies. Unfortunately, anti-penicillin IgE antibodies can also cross-react with other antibiotics. This may complicate the treatment of bacterial infections in these patients because they cannot take the antibiotics needed to fight the infection.

Penicillin is a β-lactam antibiotic, so named because it contains a quaternary β-lactam ring structure, as shown in Fig 5.3. Some anti-penicillin IgE antibodies can react with other structurally similar antibiotics. The specific specificity may vary, but there is enough “fitness” (cross-reactivity) that can significantly combine with these other antibiotics and cause treatment problems (Fig 5.8). 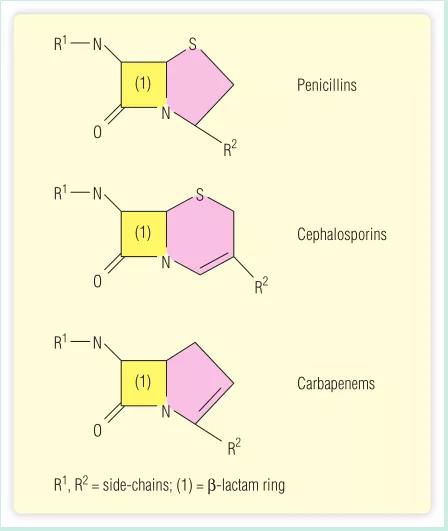 Fig 5.8 The structure of penicillin and its related antibiotics. The yellow one is the β-lactam ring

To screen blood donors for infectious diseases that may be transmitted through blood, one of the purposes of screening is to determine whether they are at risk of contracting these infectious diseases, and if so, they will be ruled out. An example is sex between men. In some countries this group may be excluded because of the higher risk of contracting HIV, syphilis or viral hepatitis. Blood tests are also performed to rule out the risk of infection. These tests detect antibodies against pathogens that are produced after infection or vaccination, just like the hepatitis B virus.

Fig 5.9 shows the enzyme-linked immunosorbent assay (ELISA) screening test for syphilis. The ELISA test plate contains two control wells and samples from 94 potential blood donors. The first hole is a positive control with the serum of a syphilis patient. The second well contains serum from people who have never had syphilis. This is a negative control. The two controls are merged together to ensure that the test is more accurate. The other well is shown in yellow, which indicates that the result is positive. 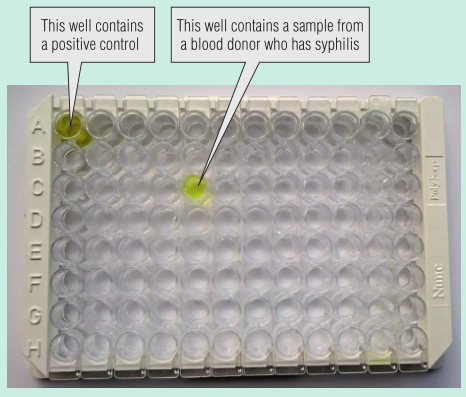 Syphilis is an infectious disease caused by the bacteria Treponema pallidum. Its transmission routes include sexual transmission, intrauterine transmission and blood transfusion. This screening test detects antibodies to the phospholipid antigen of cardiolipin and is called the Venereal Disease Research Laboratory (VDRL) test. Although almost all patients with syphilis produce these antibodies, they can also be produced by other types of infections or autoimmune people. Therefore, the detection of syphilis by VDRL is sensitive, but not very specific.

In order to confirm whether the potential blood donor actually has syphilis, the serum is used for a specific immunofluorescence test. If the result is also positive, it confirms that the donor is indeed suffering from syphilis, her blood cannot be used for blood transfusion, and she will be referred for treatment of syphilis. 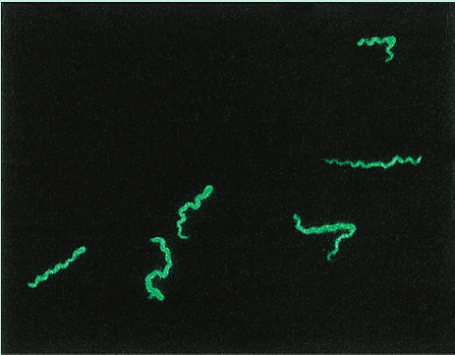 A new diagnostic test method called Luminex xMAP technology seems very valuable, especially when multiple tests are performed on small samples. This technology utilizes two aspects of enzyme-linked immunosorbent assay (ELISA) and flow cytometry. Essentially, the interior of the polystyrene microspheres is color-coded with two fluorescent dyes, which can be detected after laser irradiation. By mixing different dyes, each of up to 100 beads can be assigned a unique identity (“spectral signal”), which can be detected in a flow cytometer (see Fig 5.7).

Each bead can also be coated with different compounds, such as antibodies, oligonucleotides, and enzymes, which can collect molecules from the test sample. By using the sandwich method with different colored fluorescent reporter labels (as shown in Fig 5.11), the second laser can be used to measure the amount of compounds (for example, hepatitis virus antibodies). The microspheres are dissolved in a microtiter well or test tube, and multiple beads can exist in a single container. Each bead can be derivatized with different reagents, and a set of 100 beads can analyze up to 100 different compounds.

The beads are transported to the analyzer in the liquid and irradiated by the laser, much like a single cell in a flow cytometer (see Fig 5.7). This technique can be used to perform multiple tests from a small number of samples in a short period of time, called multiple tests. The results show that the detection method is sensitive and specific, and has certain advantages compared with other detection methods such as ELISA.

One advantage of microsphere microbead detection is that it can simultaneously detect multiple reactants, such as a set of viral antigens or a set of cytokines. 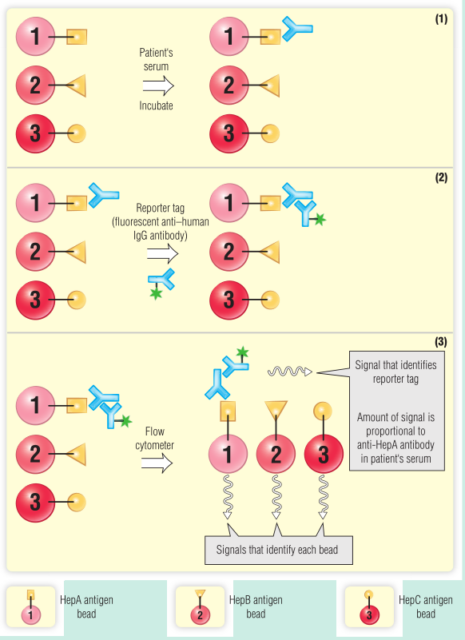 This article is translated from Oncolab’s WeChat public account and compiled from Immunology for Medical Students. It is only used for learning and communication. If you need to purchase the original book, you can click to read the original text to purchase.