What’s CD8+T cells and related functions?  T lymphocytes play a vital role in the cell-mediated process that forms the basis of adaptive immunity. When T cell receptors (TCR) on naive T cells recognize specific antigens that bind to major histocompatibility complex (MHC) class I proteins, they mature and proliferate to perform key immune functions A specialized subset of T cell types. In this article, we understand CD8+ T cells by characterizing the immune phenotype of CD8+ T cells and the processes behind cell-mediated immune function. 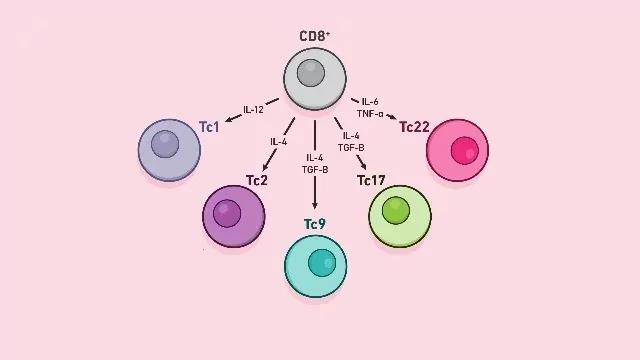 Known as cytotoxic Tlymphocyte (CTL), CD8+ T cells belong to the subgroup that expresses CD8 on their surface. CD8 is a dimeric co-receptor that allows CD8+ T cells to recognize peptides presented by MHC class I proteins.

The major histocompatibility complex (MHC) is a region of DNA that contains many genes that encode glycoprotein molecules that all nucleated cells express on their surface. There are two broad categories of MHC molecules. There are key differences between them.

MHC class I molecules are expressed on the surface of all nucleated cells in the organism. They play a vital role in the presentation of “self” antigens. When a cell is infected with an intracellular pathogen (such as a virus), the MHC class I protein will change, indicating to the natural killer (NK) cell that the cell needs to be destroyed.

MHC class II molecules are only expressed by a subset of immune cells called antigen-presenting cells. MHC class II recognition is essential for initiating an adaptive immune response by sending signals to lymphocytes (such as CD4+ helper T cells).

The successful combination between naive CD8+ T cells and Antigen-presenting cells (APC) will stimulate immature T cells to become activated CD8+ T cells with cytotoxic function. With the ability to kill intracellular pathogens and tumor cells, CTL belongs to a group of specialized lymphocytes that participate in cell-mediated adaptive immunity. Although CTL is essential for a functional immune system, the dysregulation of CTL can lead to the onset of organ-specific autoimmune diseases, such as diabetes or arthritis.

Where did CD8+ T cells originate?

All T cells originate from lymphoid progenitor cells that migrate from the bone marrow to the thymus. The thymus contains immature T cells and has not yet developed the T cell receptors required for antigen recognition. During the infection process, the initial CD8+ T cells are initially stimulated by interacting with APCs in lymphoid organs.

Once immature T cells migrate to the thymus, they are ready to develop into CD8+ cells. Progenitor T lymphocytes first undergo many DNA rearrangements, these rearrangements produce a variety of TCRs, these TCRs can recognize antigens from foreign or intracellular pathogens. TCR diversity depends on the number of random DNA rearrangements of the TCR gene, which result in the expression of unique antigen-specific receptors. Once it is determined that TCRs such as CD8 are functionally stable, immature T cells are ready to undergo an antigen-mediated process called clonal selection. When TCR is complexed with MHC class I proteins presented by thymocytes, and when the antigen binds to the antigen, positive selection begins. If the binding event is successful for CD8, the newly activated CD8+ T cells will continue to differentiate into mature CTLs. At this stage, immature T cells that cannot fully bind to the antigen-MHC class I complex will undergo apoptosis. When the binding of immature T cells to self-antigens is too strong, negative selection occurs. Negatively selected T cells are programmed to undergo apoptosis, thereby eliminating their ability to respond to healthy cells on their own.

What is the role of cytotoxic T cells?

Once CD8+ T cells are activated, they will undergo a series of replication and differentiation steps to trigger their targeted immune response. CTLs in physical contact with targeted infected or malignant cells induce apoptosis, which is a form of programmed cell death through cytotoxic enzymes and molecules. 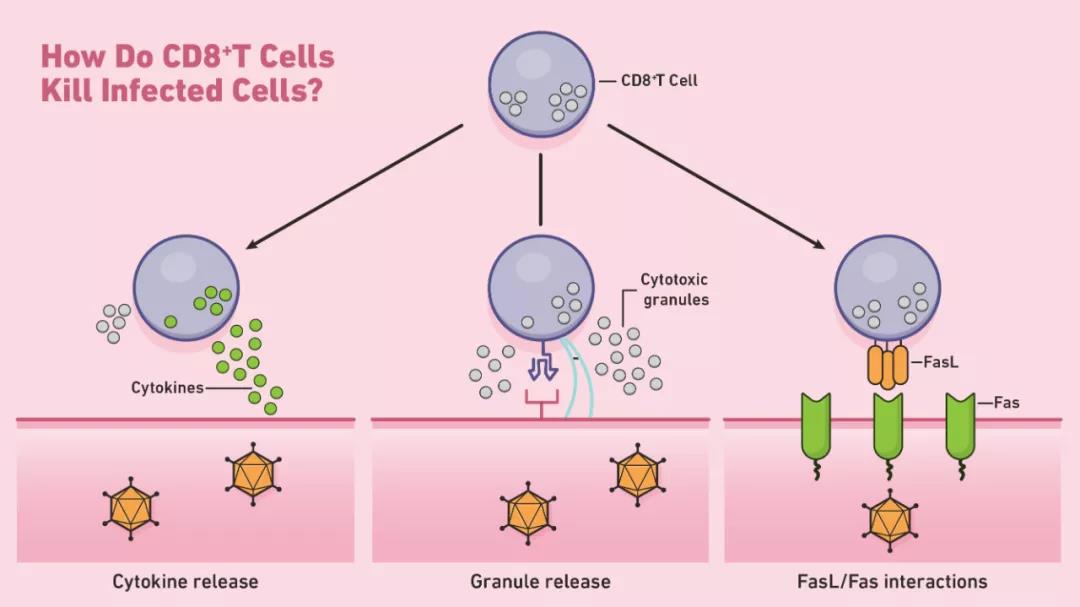 One way for CD8+ T cells to initiate apoptosis is through the secretion of perforin and granzyme (two types of cytotoxic proteins). Perforin is a cytolytic protein that forms pores in the cell membrane of target cells. CTL uses these pores to guide the release of granzyme, a type of serine protease that can continue to apoptotic in the cytoplasm. These proteases shut down target cells by lysing viruses and cellular proteins involved in the maintenance of normal cells. Then, the targeted cells undergoing apoptosis are eliminated by nearby phagocytes. CTL can also induce apoptosis through Fas-Fas ligand interaction. Whenever the Fas ligand (Fas ligand, FasL) binds to the Fas receptor on the target cell, a series of signal molecules will activate caspase (cysteinyl aspartate specific proteinase, aspartate specific proteinase containing cysteine). Enzymes) to initiate apoptosis. These proteases perform most of the proteolysis in the later stages of apoptosis.

In addition to targeted apoptosis, CD8+ T cells can also kill target cells indirectly by releasing cytokines such as TNF-α. For example, type 1 CD8+ T cells (Tc1) can release IFN-γ, a cytokine that can inhibit virus replication and enhance the presentation of specific antigens. At the end of its main reaction, activated CD8+ T cells usually die due to apoptosis.

Naive CD8+ T cells that differentiate into effector cells or memory cell types play a specific role in mediating adaptive immune responses. T cells induced to become effector cells differentiate into Tc1 or Tc2 cells. Once Tc1 cells are stimulated by cytokines (such as IL-2 and IL-12), they have the ability to directly or indirectly kill target cells. In addition, cytotoxic Tc1 cells can release IFN-γ or TNF-α to further regulate the host’s immune response. Tc2 T cells secrete cytokines IL-4, IL-5, IL-10 and IL-13 to regulate the effector immune and auxiliary immune response. Although Tc2 cells have the ability to perform cytotoxic functions, this subset of T cells is generally not as effective as their Tc1 counterparts during infection.

CD4+ lymphocytes are a group of “helper” T cells that mediate the activity of other immune cells through direct and indirect mechanisms. Naive CD4+ T cells reside in the thymus until they are stimulated by APCs expressing the MHC class II protein to which their target antigen binds. The successful combination of this protein complex activated CD4+ T cells and began to differentiate into helper cell types. Even if activated CD4+ T cells do not perform cytotoxic functions like CD8+ T cells, they will mature into helper T cell types, which can mediate fluid or cell-mediated immune responses by secreting cytokines.

Where are CD8+ T cells suitable for a broader immune response?
CD8+ T cell regulation depends on the collection of TCR-mediated stimulation and inhibition mechanisms. When CD8+ T cells present their specific antigens, they undergo numerous clonal expansions to produce the differentiated cell types required for adaptive immune responses. Regardless of antigen presentation through TCR, CD8+ T cells can indirectly attack pathogens or tumor cells through the secretion of cytokines. However, uncontrolled CTL activity may contribute to the autoimmune response against healthy cells. In this case, more understanding of CD8+ T cell processes can enhance our ability to design effective vaccines or manipulate cell-mediated immune responses in real time.