How to become a “Five-Star” hospital in United States?

Although there are many medical rating agencies in the United States, it is not easy to make a list that convinces all parties.

On April 10, 2021, the US Centers for Medicare & Medicaid Services (Centers for Medicare & Medicaid Services, hereinafter referred to as CMS) released the latest “Hospital Comprehensive Quality Star Rating Standard.” The evaluation standard is divided into 5 stars (5 stars is the highest level), which aims to reflect the comprehensive quality of nearly 4,000 hospitals in the United States and provide a reference for patients to choose hospitals.

Because the star rating is issued by the federal government, the largest health care payer in the United States, the CMS “Comprehensive Hospital Quality Star Rating Standard” has a high reputation. Patients and referral doctors use these levels to choose the location of care, and payers and purchasers use these levels to guide beneficiaries, select hospitals to contract, and set payments to these hospitals.

After estimating the number of groups for each hospital and each group, CMS will calculate a weighted average and add the five category scores to the total score of the hospital. If the hospital lacks a measurement category or group, the weight will be redistributed proportionally among the eligible measurement categories or groups. It should be noted that only hospitals with the above three categories and at least one with mortality or nursing safety are eligible for the selection.

Table 1: The proportions of the 5 categories 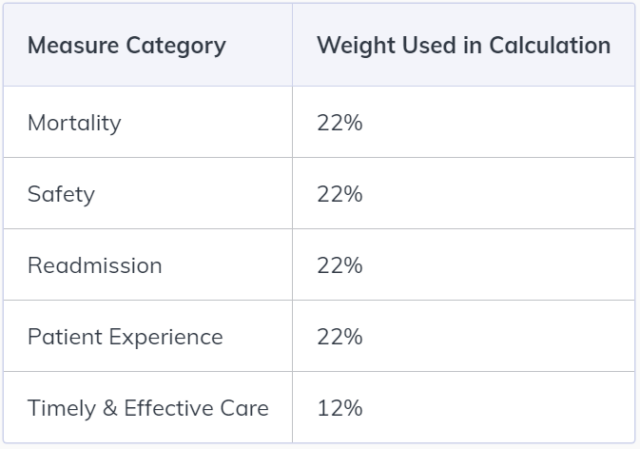 The above table shows that mortality, nursing safety, patient readmission rate, and patient experience all accounted for 22%, and nursing efficiency and timeliness accounted for 12%. 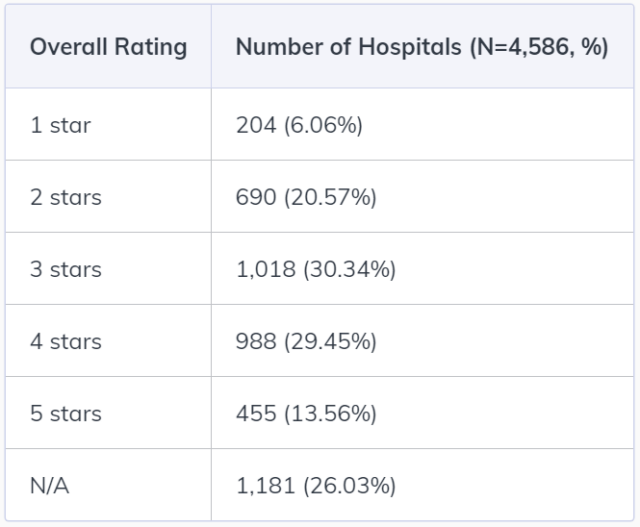 In fact, the CMS star rating aroused great controversy as soon as it was released. For example, in the 2016 CMS rating, there were 102 5-star hospitals, most of which were unknown hospitals. Many well-known hospitals in the United States were beaten, such as Herman Memorial Hospital, Mayo Clinic, and Duke University.

In 2020, CMS star rating will be suspended for re-evaluation and modification.

On May 17, JAMA published a commentary on this. Karl Y. Bilimoria, MD, of the Center for Surgical Outcomes and Quality Improvement, Northwestern University School of Medicine, Chicago, is the corresponding author of the article. The article pointed out that the 2021 version has made the following three improvements:

First, a simple average is used to averagely weight all the metrics in the group instead of the original variable modeling. In addition, the new method is transparent and easy to understand for patients, referring physicians and payers, and hospital leaders who use rankings to determine quality improvement efforts.

Second, hospitals are included in star ratings only when they have enough data to make meaningful ratings. Only those hospitals that report at least 3 of the 5 measurement groups (mortality and safety of care are required) are included in the rating. Although this means that approximately 125 hospitals will not receive the previous star rating by 2021, this method improves the significance of comparison among all hospitals.

Third, instead of including all hospitals in one evaluation form, hospitals are divided into 3 groups based on whether they submit metrics that are sufficient to meet 3, 4, or 5 metric groups. In the 2021 star rating, hospitals in less than 5 major categories will be included in 3 or 4 metric groups, so that hospitals with similar conditions can be compared horizontally.

The article pointed out that the 2021 revised CMS star rating is a significant improvement on the previous iteration of the program. Now, everyone who uses these ratings should have more confidence in the effectiveness and fairness of these measures. CMS will continue to contact the technical expert group to promote the continuous improvement of the star rating system, because there are still considerable limitations and room for improvement.