Single men are more susceptible to cancer and higher cancer mortality rate.  The study shows that loneliness increases the cancer risk of middle-aged men by 10%, which is equivalent to smoking and obesity.

As we all know, loneliness is not good for mental health, but you may not know that loneliness can also cause great harm to physical health. Globally, cancer is the second leading cause of death in humans, and loneliness is considered to be a risk factor for cancer deaths. However, it is still unclear about the connection between loneliness and cancer.

Recently, researchers from the University of Eastern Finland published a study titled “Loneliness and social isolation increase cancer incidence in a cohort of Finnish middle-aged men. A longitudinal study” in the journal “Psychiatry Research”.

The study shows that loneliness increases the cancer risk of middle-aged men by 10%, which is equivalent to smoking and obesity.

Researchers conducted a study on 2,570 middle-aged men, and have been monitoring their health and mortality since 1980.

Cox regression table for the incidence of loneliness and total cancer

Studies have shown that there is an “obvious association” between loneliness and increased cancer risk, and loneliness can increase cancer risk by about 10%.

In addition, regardless of age, socioeconomic status, lifestyle, sleep quality, depressive symptoms, body mass index, heart disease and its risk factors, the correlation between loneliness and cancer can still be observed.

Importantly, the study also found that cancer patients who are unmarried, widowed, or divorced have higher cancer mortality. 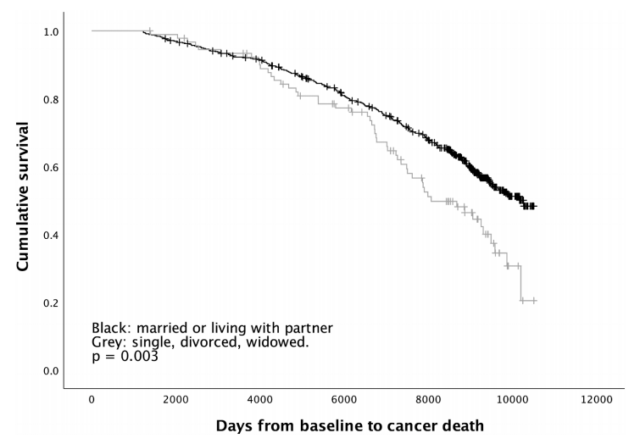 The impact of social isolation on the incidence of cancer

Researchers pointed out that, according to research conducted in recent years, loneliness may be as harmful to health as smoking or obesity.

The author believes that the impact of loneliness on health is increasingly being valued. Therefore, it is necessary to study in more detail the mechanism of loneliness leading to negative health effects.

The research results will allow us to better alleviate loneliness and the harm caused by it, and also help to find the best preventive measures.