Why do men have higher overall morbidity and mortality on some cancers?

Why do men have higher overall morbidity and mortality on some cancers?  This article will tell you the gender differences in tumor immunotherapy.

There is increasing evidence that, compared with women, some cancer types have higher overall morbidity and mortality in men. Cancers of non-reproductive tissues occur more frequently in men, and the mortality rate is almost twice that of women.

There are many factors that affect the occurrence and development of tumors. First, smoking accounted for 30% of cancer deaths in the United States in 2014, of which 62% were males and 38% were females.

Second, obesity causes 5.5-20% of cancers, and men have a greater risk of cancer. Measured by the standard of body mass index ≥ 30 kg/m2, men and women have a 33% and 22% higher risk of all cancers, respectively.

The third factor is inflammation, which is closely related to obesity and is more common in men than women.

Understanding the difference between men and women in the occurrence and development of cancer is the core of rational management and treatment of patients. In this way, patients can be included in the treatment design according to gender and the optimal cancer treatment plan can be customized.

At the center of gender differences are the sex chromosomes, X and Y, which encode the core genetic differences between women and men.

Because the X chromosome inactivation (XCI) process in women is usually random, the cells in women are mosaics with maternal or paternal X chromosomes. Therefore, female cells may express different X gene pools, which is in contrast to the sole maternal source of male X gene expression. For example, women with harmful recessive X-linked gene mutations are more advantageous than forced expression in men due to chimerism rather than expression in all cells.

How the innate and adaptive immune system interacts with cancer under the influence of gender and age is an emerging field of research. The key factors of immune-mediated recognition and elimination of cancer cells are different between genders, which may affect the outcome of the disease. The immune response of adult women is usually stronger than that of men. In general, women are better at increasing the beneficial acute inflammatory immune response than men. 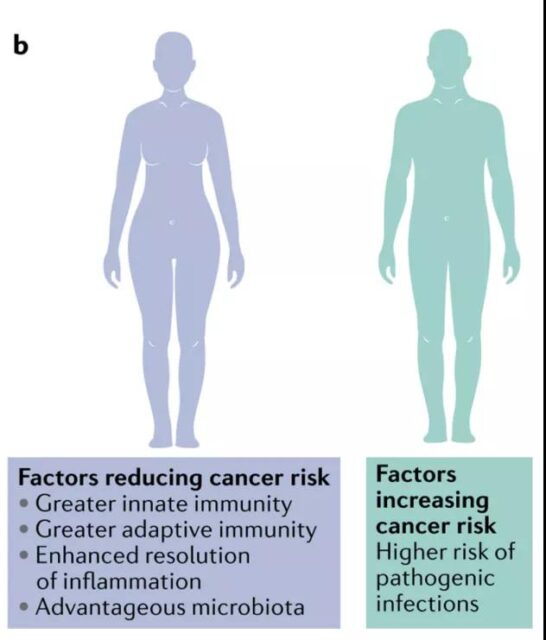 To some extent, this is due to the low physiological levels of estrogen that stimulate the production of acute inflammatory cytokines IL-6 and TNF, which play an active role in infection control. Conversely, high levels of estrogen can inhibit the expression of these cytokines, and testosterone can also reduce the level of TNF. In general, women are more effective at resolving infections than men, which corresponds to the risk of cancer arising from continuous exposure to chronic infection-related inflammation.

Among about 50 X-linked genes involved in innate immunity and adaptive immunity, FOXP3 is a characteristic marker of immunosuppressive Treg. FOXP3 is a transcriptional regulator, which is essential for the development and function of Treg cells.

X-linked immune genes also determine the resistance of gender differences to infection and chronic inflammation. Among the 18.1 million new non-reproductive cancer cases in 2018, the incidence of men was twice that of women. An Australian study showed that men are also at higher risk of death due to infection than women. Specifically, within the first year of cancer diagnosis, the incidence of sepsis is higher, and the mortality rate of male patients is significantly higher. Related. This may be one reason why the survival rate of women after surgery for lung cancer and melanoma is higher than that of men. The protection of women against sepsis is related to the advantages of the female X gene pool. Further research on the susceptibility of different sexes to infection and sepsis is expected to provide opportunities for reasonable therapeutic intervention.

The expression of X-linked gene TLR7 in B cells and myeloid cells, and the expression of TLR7 in male mouse cells is higher than that in female mice, which is attributed to the lower methylation level of the maternal X chromosome. In contrast, women either express their mother’s hypomethylated copy, or express their father’s hypermethylated X chromosome genes, and overall show a lower level of gene expression than men. It is worth noting that in humans, the number of circulating CD4+ T cells in women is higher than in men of the same age, although the level of CD4+ T cells decreases with age.

There are also obvious gender differences in the expression of TLR8 gene. TLR8 is transcriptionally regulated by p53 in human immune cells. This level of transcriptional regulation is controlled by the single nucleotide polymorphism of the human TLR8 promoter, and the female X chromosome mosaic state seems to affect this single nucleotide polymorphism, and thus the expression of TLR8.

Enhancing immunity to tumors is the core of the new round of immunotherapy. Immune checkpoint inhibitors (ICIs) are designed to re-stimulate the immune response to tumors that are evading immune surveillance. Significant gender differences in response to ICIs (such as inhibitors of PD-1, PDL-1, and CTLA-4) are very obvious in the analysis of individual cancer types. 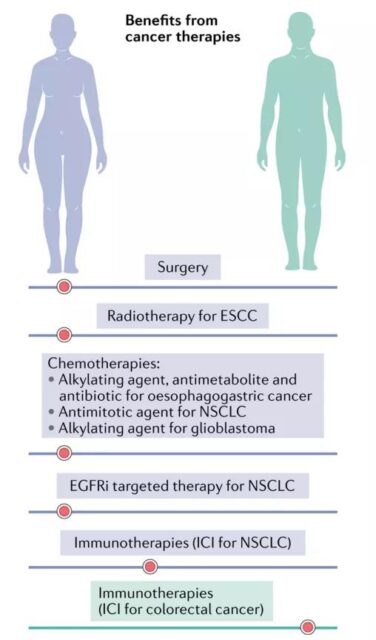 Compared with men, anti-PD-1 or anti-PD-L1 treatment can improve the overall survival rate and remission rate of female patients with NSCLC. In contrast, in colorectal cancer, the survival time of male individuals is significantly longer than that of females. For skin melanoma, in six of the seven clinical trials, the overall survival rate of men to ICI treatment (alone or in combination with anti-PD-1 or anti-CTLA-4) was higher than that of women.

In addition, the determination of gender differences in ICIs response needs to incorporate immune and molecular characteristics, and adjust for confounding factors, including race, smoking status, tumor stage, histological type, tumor purity, and age at diagnosis. In previous studies, the combined use of cancer types and treatment methods made it impossible to draw clear conclusions, and it is also the most basic to include a sufficient number of women in the group. In many studies, underrepresentation of women may be a problem.

The impact of gender on the microbiota is also related to the ICI response. In the case of increased fecal bacterial diversity, including mouse models and melanoma patients treated with ICIs, the survival results are better, and these communities are higher in healthy women. Related to this is that women are more likely to take antibiotics than men, and at higher doses. In cancer patients diagnosed with melanoma or NSCLC, antibiotics administered within 1 month before ICI administration can reduce mortality by 50%.

There are also gender differences in cancer radiotherapy and chemotherapy and treatment effects and toxicity. Compared with men, radiotherapy for female esophageal squamous cell carcinoma significantly prolonged their survival. However, in this type of cancer, the cardiotoxicity of women is significantly lower than that of men. Similarly, among young children who received head radiotherapy, girls had more IQ impairments than boys. Obviously it is necessary to expand these studies and ensure that this basic treatment is optimized between the sexes.

In a series of cancer treatments, women’s chemotherapy toxicity is also significantly greater than that of men. Normally, compared with men, women are more toxic and take fewer doses. Compared with men, female chemotherapy is more toxic because of slow clearance. Female patients tend to be older than male patients (at least for colorectal cancer), which indicates more fragility.

In drug development, it would be advantageous to incorporate the patient’s gender into the development of new therapies from the very beginning. In order to get the best benefit from these treatments, four key differences should be incorporated into future drug development strategies.

The first is that the pharmacokinetics of women is slower than that of men due to the slow elimination of drugs. This is due to the gender difference in the expression of drug metabolizing enzymes in the kidney and transporter.

The second difference involves the different outflow rates of chemotherapy and other exogenous drugs between different sexes. In female mice, the expression of ABCB1 pump (MDR1) in the ileal mucosa and liver is more affected by the circadian rhythm than in males, which affects the amplitude and duration of its expression. This suggests that simultaneous administration of women in these rhythms may improve efficacy and reduce toxicity.

The fourth consideration is to target cell populations that differ between the sexes. The level of monocyte-derived suppressor cells in male tumors is higher than that in females, which hinders tumor immunity, and males especially benefit from antimetabolites (such as 5-fluorouracil). In contrast, women have higher circulating levels of granulocyte-derived suppressor cells than men, and women benefit from IL-1 pathway blockade (such as lylonase) to combat immune suppression and prolong survival. Understanding the basis of different cancer sensitivities between men and women is essential to obtain effective anti-cancer treatments.

Gender differences in cancer are undeniable and appear with complex interaction factors. The basis of everything is inherent genetic differences, as well as overlapping epigenetic changes and the influence of sex hormones. In general, women have stronger immune defenses than men, which raises some important questions. For example, women are relatively more immune, and receiving immunotherapy will have a greater promotion effect than men, but will they have a greater risk in terms of autoimmunity? In addition, will men with weaker immune systems respond more significantly to treatment because their lower starting point provides greater expansion capacity? In addition, the ability to enhance the immune converted into whether a gender-dependent manner to reduce chronic inflammation?

A deeper understanding of the mechanism of gender differences in tumor immunotherapy and the incorporation of gender factors into the development of tumor drugs will help us answer the above questions, so that we can formulate more targeted treatment strategies to achieve tumor immunotherapy for men and women The best result.