Is COVID-19 vaccine still effective  even the number of cases in the UK has increased by 128%?

Is COVID-19 vaccine still effective even UK cases has increased by 128%?  Summarize the important progress of COVID-19 in the past week, mainly including:

At present, most countries have entered the second stage of the epidemic: relying on vaccination to end the epidemic. With the deepening of vaccination, the side effects of the vaccine have begun to appear.

The currently affirmed side effect is the lethal thrombosis associated with AstraZeneca and Johnson’s adenovirus vector virus vaccine.

An emerging but unconfirmed side effect is myocarditis/pericarditis associated with Pfizer’s mRNA vaccine.

Below we report the latest developments in the epidemic and vaccines as of June 13, 2021 Pacific time.

At the end of the article, let’s take a look at the outbreak in the UK again. Is the vaccine unreliable?

A. The global COVID-19 epidemic continues to improve, South America and Africa continue to deteriorate 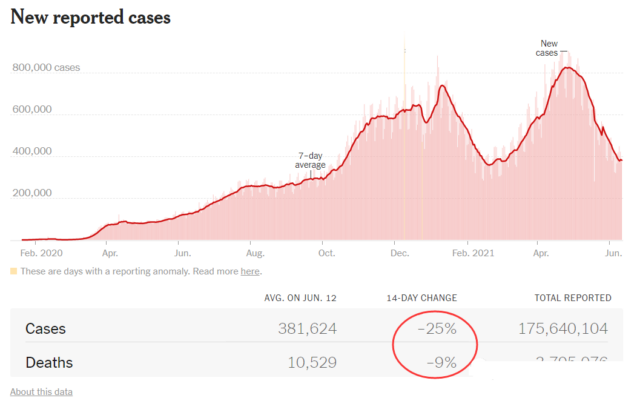 From the map of COVID-19 epidemic, India, Brazil, Colombia, Argentina, the United States and Russia have the five countries with the largest number of confirmed cases in a single day. 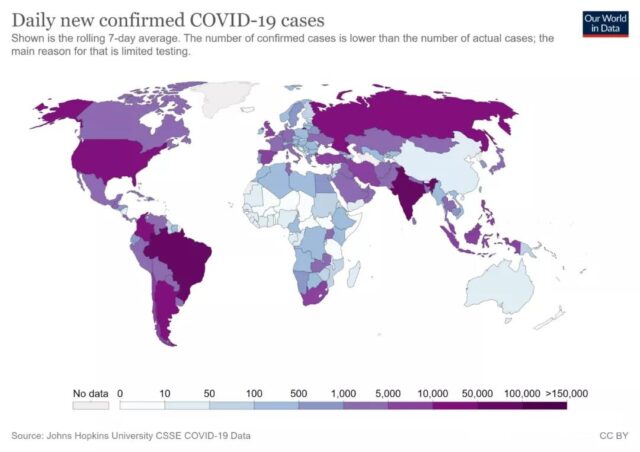 (Number of infected cases in a single day on June 12. Source: Data World)

The epidemics in the European Union and the United States have improved significantly.

Most states in the United States have been fully opened, and restaurants and public entertainment venues have also reopened. Under this circumstance, the epidemic situation has maintained a rapid downward trend, showing that the vaccine has really played a powerful role. 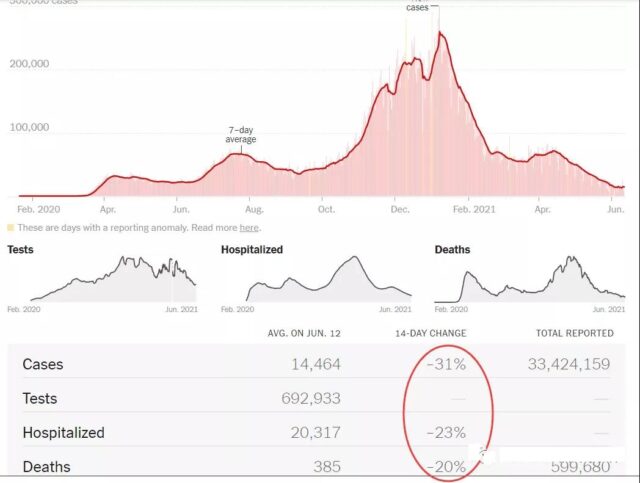 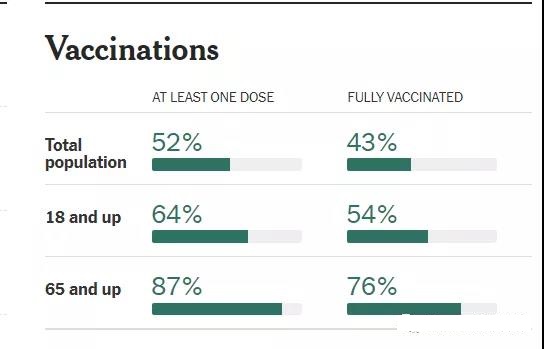 B.  Vaccination: China’s vaccination volume is far ahead

Vaccines are the only way to complete herd immunity and the most effective way to rescue humans from COVID-19.

Therefore, the world is rushing to vaccinate. But not everyone can get the vaccine.

As shown in the figure below, of the 2.33 billion doses of vaccine that humans have vaccinated, China has vaccinated 8.6 doses, accounting for 37% of global vaccinations.

In a single day of new vaccination, China received an average of more than 17 million doses per day, nearly half of the global vaccination, and five times that of the second-placed India.

Among high-income countries, the United States is in the leading position, while Japan is the lagging behind among the major countries; people worry about whether the Olympic Games can continue.

Among middle- and high-income countries, China is at the forefront; let us be confident that China will hold the Winter Olympics as scheduled.

India is in a relatively high position among low- and middle-income countries.

The common feature of these countries with the highest vaccination rates is that they produce vaccines in their own countries. In the face of the great plague, this is the most reliable guarantee. 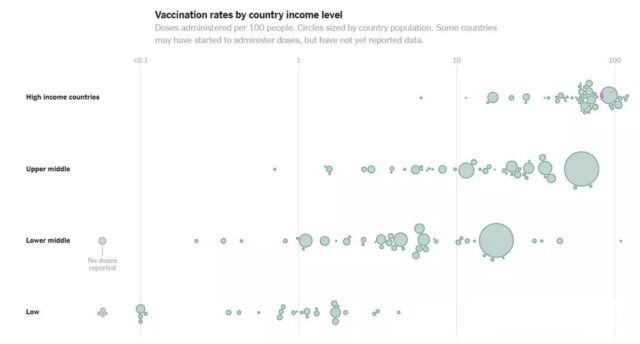 If according to the vaccination rate of each continent, North America is the highest, followed by Europe, South America, Asia, Oceania and Africa. 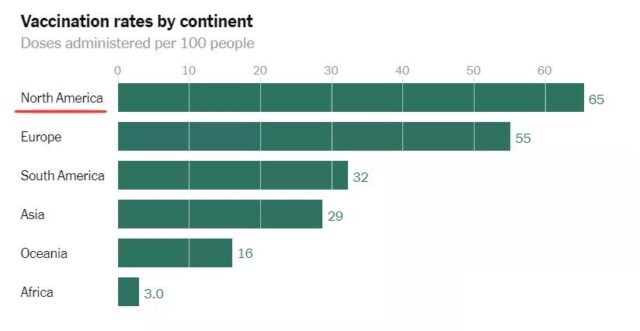 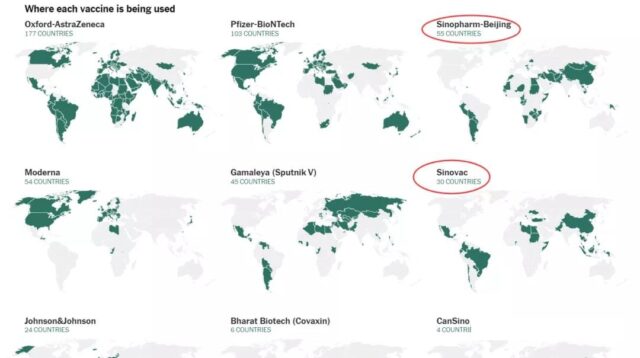 C. Is COVID-19 vaccine still effective even UK cases has increased by 128%?

In the past two weeks, the number of new cases in a single day in the UK has increased by 128% compared with the previous period. Once again, a series of discussions were triggered, the most enthusiastic is to work hard to find the reason why the British epidemic has increased again. 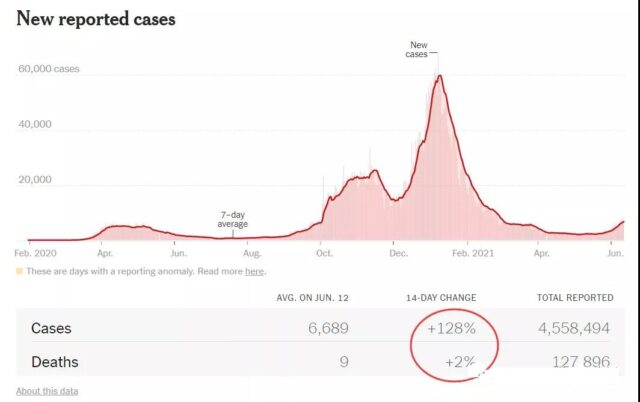 Calculated based on the number of new cases per million people, the epidemic in the UK has far exceeded that in India; not only the UK and Russia have experienced severe epidemics again.

The University of Oxford reported in Nat Med that the real-world protection of the two vaccinations BNT162b2 and ChAdOx1-nCoV-19 (AZD1222) in the UK showed that from December 1, 2020 to May 8, 2021, from 383,812 people The 1,945,071 real-time PCR results collected by the subjects showed that the protection of the two vaccines against symptomatic and asymptomatic infections was 79% and 80%, respectively, after two vaccinations with ChAdOx1 or BNT162b2.

Although vaccination can also significantly relieve symptoms and reduce the viral load after infection; the current vaccination in the UK has only 79% protection against symptomatic COVID-19, which is obviously far lower than the 95% protection of Israel; this It also makes people worry about the protection of AstraZeneca vaccine.

Russia, which has a low vaccination rate, ushered in a small peak of the epidemic, with 13,500 new cases in a single day, mainly driven by the Delta mutant strain. Vaccination is highly effective for Delta.