Why does the successful pregnancy of male rats become so controversial?

Why does the successful pregnancy of male rats become so controversial? Study author: please stop linking rat models with humans.

Multiple operations and wound healing have introduced some confounding factors, making it impossible to draw the conclusion that the pregnant blood microenvironment is the key to pregnancy in male rats.

In nature, it is extremely rare for a male to become pregnant and give birth to a child. So far, only the sea dragon family (such as the hippocampus) has the phenomenon of male pregnancy.

Recently, Rongjia Zhang and Yuhuan Liu of Chinese Naval Military Medical University published a research paper titled “A rat model of pregnancy in the male parabiont” online on the non-peer-reviewed preprint platform bioRxiv, claiming to use conjoined rats to construct a pregnant mouse model. The male rat was successfully conceived and gave birth to offspring. In the end, 10 cubs developed to adulthood.

As soon as the news was released, this topic instantly appeared on the hot search list, sparking a lot of discussion among scholars.

Let’s first take a look at how this experiment is done.

As can be seen in the article, the researchers constructed a conjoined rat model, that is, the male and female rats were surgically connected to form a pair of heterosexual connection symbioses; 8 weeks later, the male was born Rats undergo uterine transplantation; after recovery, the blastocyst stage embryos are transplanted into the transplanted uterus of male rats and the natural uterus of female rats; Caesarean section is performed on the 21.5th day of embryonic development, and offspring are obtained. 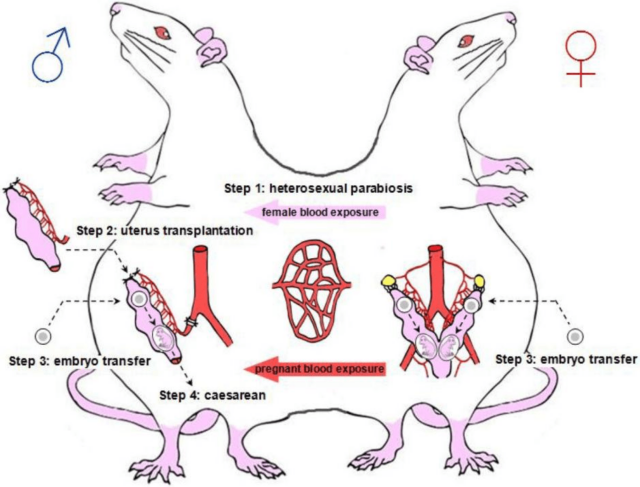 Throughout the experiment, the researchers constructed a total of 46 pairs of conjoined rat models, with a success rate of only 3.68%. In the end, the male rat successfully gave birth to 10 normal-growing rat pups. The key point is that the researchers found that the embryos transferred from the male uterus can only develop normally if they are exposed to the blood of the pregnant female.

This also confirms their original hypothesis: In addition to the lack of uterus, the development of intact embryos in male mammals is limited because of the lack of pregnant women’s microenvironmental conditions that promote endometrial growth and allow embryo implantation or development.

Seeing this, it is self-explanatory why the experiment caused such a huge controversy.

“The male rats are all pregnant. Is it still a long way for a man to give birth to a baby?” “In order to make the male rat pregnant, two female rats were sacrificed, which is too…” “I don’t know the meaning, I just think that the female rat Disassembled and assembled a male rat that can become pregnant”. On the Internet, all kinds of voices are coming.

In addition to arousing public discussion, the research has also attracted the attention of scientists in the industry. According to The Scientist, Clint Kelly, a biologist in research on sexual selection and evolutionary biology at the University of Quebec in Montreal, commented positively on this research: “Although I doubt whether this research will soon lead to the popularization of male mammal reproduction. , But I can imagine that this kind of research and development technology and knowledge will promote the development of other medical fields such as female reproductive health and organ transplantation.”

Paul Robbins, a biologist at the University of Minnesota, believes that multiple operations and wound healing have introduced some confounding factors, making it impossible to draw the conclusion that the pregnant blood microenvironment is the key to pregnancy in male rats. Kelly also believes that females are not simply males with uterus. A successful pregnancy obviously requires more than just the uterus and full exposure to progesterone and estradiol.

In the face of various voices on the Internet, the research author who felt great pressure once asked bioRxiv to withdraw the manuscript, but then asked to stop the withdrawal.

In order to let everyone understand their own ideas, Zhang Rongjia, the first author and corresponding author, responded on the peer review website PubPeer. The first point to emphasize is, please stop linking rat models with humans!

Zhang Rongjia pointed out in his response that this paper is currently only a preprint and has not yet passed peer review. There may be deficiencies and corrections. And we are also aware that some inappropriate descriptions in the preprint have brought unnecessary trouble to people who are not studying in this field. For those who do not belong to this field, we do have some explanations:

1. Please stop linking rat models with humans. They are completely different (mice can be inbred for reproduction, mice have two uterus, and the hind limbs of mice are very resistant to ischemia. These are the basis for establishing this model, but humans do not).

2. Even if we consider human beings, our experimental conclusions are on the contrary, it is not feasible for men to become pregnant at this stage. That’s because we found that only the male doublets that have been exposed to female pregnancy blood can get pregnant, and the success rate is very low. If our result is correct, it is almost a “death sentence” for the male pregnancy.

3. We have spent many years on this paper. All the work we do is for our personal interest and curiosity. Please don’t blame others.

4. Regarding animal ethics, we have our own rules, which can be summarized in two points: (1) Minimize the number of animals used; (2) Minimize animal suffering. If you read our paper carefully, you will find that we used different receptors during the surgical training phase, and the number of mice used was reduced by 60; all operations were performed under anesthesia, supported by previous literature, and the entire experimental process The middle animal did not show pain symptoms such as screaming. In addition, pregnancy does not cause significant pain, but childbirth does. So we used a caesarean section.

5. Please be cautious about preprinted papers because they have not yet passed peer review. It is inappropriate to exaggerate the conclusions of the preprints with scientific facts. Please do not bring non-scientific factors into scientific research.

From the above responses, it is not difficult to see that the author’s interpretation of the experimental results is exactly the opposite of the public’s understanding of the experiment. This also reminds us that it is almost impossible to “male be pregnant and have children”.

Of course, this is not the first study of whether a male can become pregnant, and it will not be the last. It can only be said that the current research is still very preliminary, some mechanisms need to be further greedy, and there is still a long way to go before clinical application.