Drinking Tea May Not Be Health and Related to Various Cancers

Can drinking tea really prevent illness? How much impact does it have on health? We let the research do the talking.

On March 11 this year, a prospective study on chronic diseases conducted by the team of Professor Li Liming of the School of Public Health of Peking University was officially published. The study involved more than 500,000 people, including diabetic and non-diabetic people. After analyzing the data, it is found that healthy people drink green tea every day, which can effectively prevent diabetes. In addition, people with diabetes who drink green tea every day can also reduce the risk of death.

For a long time, when it comes to the benefits of drinking tea, the word “anti-cancer” is indispensable. Can drinking tea prevent cancer?

At present, a large number of studies have confirmed that the polyphenols contained in tea can prevent cancer. A study published in “Nature Communications” showed that epigallocatechin gallate (EGCG), a catechin monomer isolated from tea, may enhance the activity of the natural anti-cancer gene P53. P53 has the function of promoting DNA repair and destroying cancer cells. More than half of cancers will have P53 mutations.

Of course, drinking tea to prevent cancer is not absolute. Studies have also shown that drinking tea may cause cancer.

In 2019, the team of Professor Li Liming of the School of Public Health of Peking University published an article in the European Journal of Epidemiology. The study analyzed the relationship between tea drinking and cancer based on the data of more than 500,000 Chinese people drinking tea. It was found that drinking tea is mainly related to lung cancer, stomach cancer, colorectal cancer, liver cancer, and the incidence of breast and cervical cancer in women, but this association is not cancer prevention, but cancer.

The results of the analysis showed that people who consumed more than 4g of tea a day had a 26% increase in cancer risk compared with those who drank tea less than once a week. Among them, the risk of lung cancer has increased by 62%, and the risk of gastric cancer has increased by 29%. At the same time, the researchers also found that the cancer caused by drinking tea may be closely related to the fact that people who drink tea often smoke and drink alcohol. 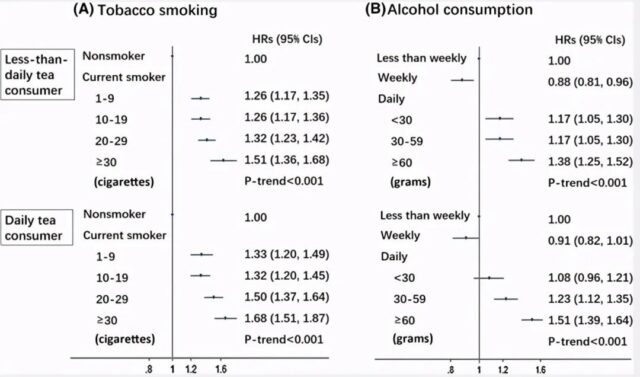 Judging from the current research, it is still inconclusive whether drinking tea is cancer-causing or not. However, it should be noted that although tea contains anti-cancer active ingredients, it does not mean that drinking tea can prevent cancer. The anti-cancer active ingredients in tea require technical separation and purification, and the intake of direct tea is very limited. In addition, the current research on tea anti-cancer is limited to cell and animal experiments, not equivalent to human experiments.

Therefore, it is unrealistic to think of drinking tea to fight cancer and prevent cancer.

Regardless of whether drinking tea prevents cancer or not, it is clear that tea is one of the healthiest beverages in the world. A number of studies have shown that regular tea may help control chronic diseases and reduce cardiovascular and cerebrovascular morbidity and mortality. However, in order to get the benefits of drinking tea, the premise is to learn to drink tea correctly.

In addition, long-term drinking of strong tea will also increase the risk of cancer. Tea contains caffeine, especially strong tea has more caffeine content, which will strongly stimulate the upper gastrointestinal mucosa, cause mucosal lesions, and promote the occurrence of gastric cancer and esophageal cancer.

Therefore, if you want to reap the benefits of drinking tea, you must drink less hot tea and strong tea to minimize the harm.