JAMA: Can the gap between rich and poor really affect life span?

JAMA: Can the gap between rich and poor really affect life span?  Although with the continuous development of science and technology, human life span has been greatly improved, but there is always a limit. Scientists have discovered that human life span may continue to rise slowly at the end of this century, reaching 125 or even 130 years. In addition, the life spans of the poor and the rich are not the same.

Recently, researchers from Northwestern University in the United States found that middle-aged people with more wealth tend to live longer. The study included data on siblings and twins into the wealth and longevity study for the first time, exploring and analyzing the relationship between middle-aged net worth (average age of 46.7 years) and all-cause mortality. The results of the study were published in the JAMA Health Forum.

In this study, the researchers used data from an ongoing national research on health and aging—Mid-aged in the United States (MIDUS) study, which included adults between the ages of 20 and 75 (unrelated individuals) , Identical twins, fraternal twins and identical twins). The study uses data collected for the first time from 1994 to 1996 and uses survival models to analyze the relationship between net worth and longevity.

The results showed that a total of 5414 participants were admitted, with an average age of 46.7 years, including 2766 women. A higher net worth is associated with a lower risk of death. Especially among siblings and twins (n ​​= 2490), a similar association was observed between higher net worth and lower mortality, indicating that siblings or twins with more wealth are more wealthy than those with less wealth. Siblings/twins live longer. 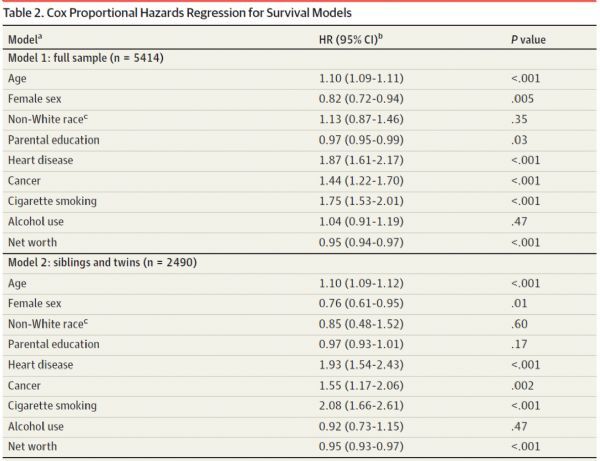 At the same time, when the researchers separately analyzed the subsamples of siblings, fraternal twins and single-egg twins, similar results were obtained. This finding suggests that the relationship between wealth and longevity may be causal, not just a reflection of genetic characteristics or early experiences in the family. 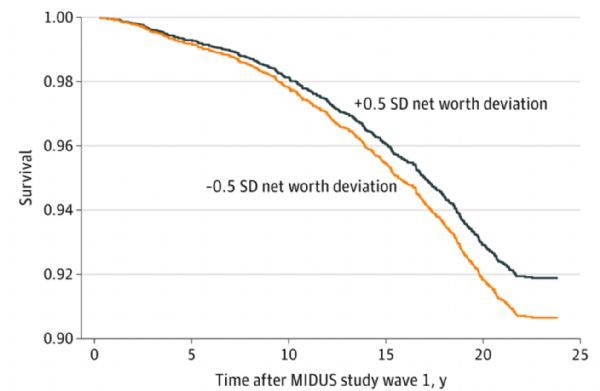 Within the family, the link between wealth and longevity

The researchers further analyzed other factors affecting life span, such as health status. The data was re-analyzed using people without cancer or heart disease. However, even in this subgroup of healthy individuals, the intrafamily link between wealth and longevity still exists.

In summary, there is an association between middle-age wealth and longevity, and this association is unlikely to be a product of the environmental and genetic characteristics shared by the family. In the United States, wealth inequality has risen sharply. Narrowing the gap between rich and poor may bring huge health benefits.