JAMA: Coffee will reduce risks of arrhythmia and not disturb the heartbeat

Coffee is the most popular beverage worldwide. 80% of adults drink at least one caffeinated beverage every day. It is estimated that 3 billion cups of coffee are consumed every day in the world. Because it contains a large amount of caffeine, it is often consumed by people to refresh their minds and improve work efficiency.

Because coffee has an exciting and refreshing effect, doctors have been advising people with heart problems such as arrhythmia not to drink coffee for decades to prevent the rapid heartbeat caused by coffee.

However, a recent large-scale study of more than 380,000 people showed that people can actually enjoy coffee and other caffeinated beverages without worry, because caffeine does not seem to increase the risk of arrhythmia.

The research was published online on July 19, 2021 in JAMA Internal Medicine, a subsidiary of the top medical journal JAMA. The paper is titled: Coffee Consumption and Incident Tachyarrhythmias Reported Behavior, Mendelian Randomization, and Their Interactions. The author of the paper is from the University of California, San Francisco .

This large-scale study found that for every extra cup of coffee a person drinks a day, their risk of arrhythmia is reduced by about 3% on average.

The research team stated that most people, even those with arrhythmia, should be able to enjoy a cup of coffee. For some people, coffee or caffeinated products will not disturb the heartbeat, but will help reduce their Risk of arrhythmia.

Coffee is the most widely consumed beverage (one of) in the world, but its exciting and refreshing effect has prompted many doctors to warn heart patients not to drink coffee.

In order to understand whether caffeine really causes abnormal heart beats, the research team analyzed data from 386,258 people from the British Biobank between January 1, 2006 and December 31, 2018.

During an average follow-up of 4.5 years, 16,979 of these people had heart rate problems. All participants were asked about their coffee consumption when entering the study. The researchers compared their feedback with their likelihood of developing an arrhythmia.

The results of the analysis showed that there was no connection between caffeine and arrhythmia, even though the researchers considered genetic factors that may affect how individuals metabolize caffeine. 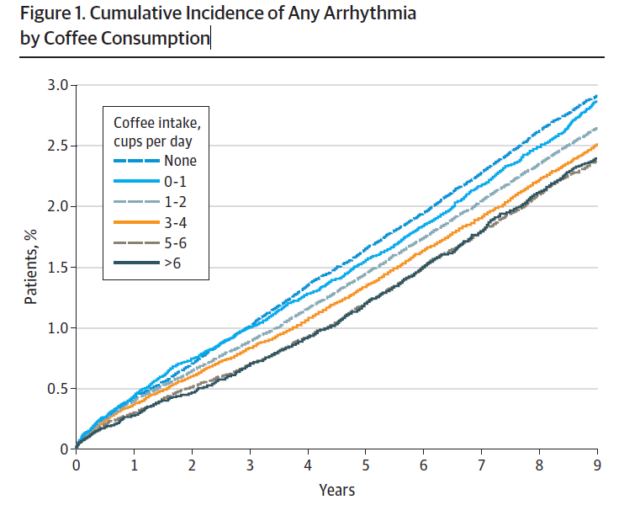 The higher the coffee consumption, the lower the risk of arrhythmia

The author of the paper, Dr. Gregory Marcus, associate director of the Department of Cardiology at the University of California, San Francisco, said that this large study shows that there is no evidence that people who drink more coffee or caffeinated products are at higher risk of arrhythmia. Some people may cause some problems because of caffeine, but more and more evidence shows that these cases are actually very rare.

JAMA Internal Medicine distributed a review article from Dr. Zachary Goldberger, associate professor of cardiovascular medicine at the University of Wisconsin-Madison at the same time: Another Cup of Coffee Without an Arrhythmia, Please.

He commented: In the past, coffee was thought to cause arrhythmia, but this study shows that this is not the case. He also said that the protective effect of coffee on arrhythmia should not be over-interpreted, because this effect is very small.

As we all know, inflammation can cause heart rhythm problems, and coffee has anti-inflammatory effects. It may also be that coffee makes people more excited and active, thereby reducing the risk of arrhythmia. It may also be caused by interaction mechanisms that we do not realize at all.

The corresponding author of the paper, Dr. Gregory Marcus, said that the next step is to further understand how coffee affects dirty drinking and why it can prevent arrhythmia.

Dr. Gregory Marcus also said that this study is good news, especially for those who like to drink coffee. He also told his patients the results of this study and encouraged them to try coffee.