The molecular perspective of T cell stemness and exhaustion.

The molecular perspective of T cell stemness and exhaustion.

When studying the depletion and differentiation of T cells in chronic infections and cancers, recent studies have emphasized the stemness of “depleted precursor” T cells (TPEX) before they are finally differentiated into TEX cells.

Therefore, understanding the transcriptional and epigenetic regulation of T cell stemness and depletion, as well as how systemic immunology has been and will be used to define the molecular basis of the transformation of TPEX to TEX cells, will help to better understand the stemness of T cells. Sex and exhaustion to develop new immunotherapy strategies.

The stemness of memory T cells

Adaptive immunity depends on the immune memory created after natural acute infection or vaccination. The production of long-lived antigen-specific memory lymphocytes is the cellular basis of immune memory. T cell stemness includes the ability of T cells to self-renew and differentiate into a variety of downstream cell types. This ability is called pluripotency.

Early studies on mouse memory T cells identified CD62L+CD44+ central memory T (TCM) and CD62L–CD44+ effector memory T (TEM) cells. The degree of terminal differentiation of TCM cells is lower than that of TEM cells. The size and diversity of offspring produced by a single primitive T cell and a single TCM cell under antigen stimulation are very similar.

There is a naive memory T cell population whose degree of differentiation is even lower than that of TCM cells. These cells are named memory stem T cells (TSCM). TSCM cells have many similarities with primitive T cells. However, they express Bcl-2, Sca-1, IL-2Rβ, CXCR3 and CD95 levels after antigen stimulation. Elevated.

The stemness of TPEX cells

PD-1/PD-L1 checkpoint blockade is effective for the treatment of different cancers. Since TEX cells usually express high levels of PD-1, the reversal of T cell exhaustion is considered to be a potential mechanism of PD-1/PD-L1 blockade.

After the discovery of TCF1+PD-1+TPEX cells in 2016, this view has changed dramatically. Studies have found that TCF1+PD-1+CD8+T cell subsets are similar to stem cells during chronic LCMV infection, undergo self-renewal, and differentiate into terminal TCF1–PD-1+TEX cells.

TCF1 is not only a marker of this cell subset, but also plays an important role in its production. More importantly, the proliferation burst after PD-1 blockade is almost entirely derived from this cell subpopulation.

A study used the Tcf7 diphtheria toxin receptor (DTR) system to eliminate tumor-specific TCF1+CD8+T cells, and found that the elimination of TCF1+PD-1+TIL did limit the response to immunotherapy.

Therefore, immune checkpoint blockade may depend on the proliferation of stem cell-like TCF1+PD-1+TIL, rather than the reversal of the T cell depletion program.

These findings indicate that TCF1 regulates the stemness and fate of CD8+ memory T cells. 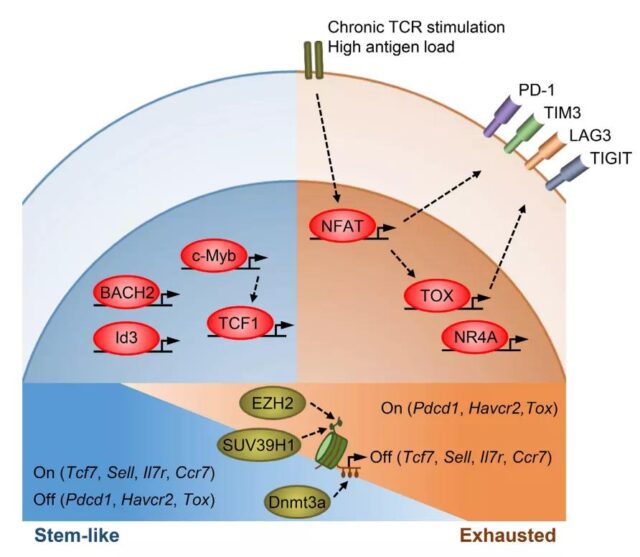 TCF1 is also a marker and key regulator of TPEX cells during chronic antigen exposure. Deficiency of TCF1 can lead to obstacles in the production of TPEX cells. In addition, Chen et al. used scRNA-seq and lineage tracking to study the state of T cells in the early stages of chronic infection.

They found that TCF1 inhibited the development of KLRG1hi terminal effector T cells when TPEX cells were cultured. Therefore, although TCF1 promotes the production of TPEX cells and maintains a chronic response, it may inhibit T cells from exerting direct effector functions.

BACH2 is an important regulator of TPEX cells during chronic antigen exposure. Studies have shown that BACH2 deficiency can impair the production of TCF1+CD8+TPEX cells, while overexpression of BACH2 can enhance its production in the early stages of chronic infection. Therefore, BACH2 actively promotes the generation of stem cell-like CD8+TPEX lineage and protects TPEX cells from terminal depletion.

Id3 is a member of the Id protein family that negatively regulates DNA binding to E protein, and is essential for the formation of CD8+ memory T cells. Id3 is highly expressed in TCF1+TIM3–TPEX cells. When TPEX cells finally differentiate into TIM3+T cells, Id3 and TCF1 are gradually lost. Therefore, Id3 and TCF1 are both transcriptional markers of TPEX cells. Whether Id3 regulates the state of TPEX cells is unclear.

In order to develop longevity memory T cells, these memory precursor cells clear the de novo methylation process of the original related gene locus to allow its re-expression, while the key effector gene remains demethylated. Therefore, during the development of memory cells, T cells may lose and re-express some stem cell/naive-related genes.

The methylation of histone H3 lysine 9 (H3K9) and 27 (H3K27) is highly correlated with transcriptional inhibition. SUV39H1 is a histone methyltransferase that methylates H3K9. Studies have found that CD8+ T cells lacking SUV39H1 cannot silence stem/memory genes during the differentiation of end effector cells, and increase the ability of long-term memory reprogramming.

Polyclonal suppression complex 2 (PRC2) silences gene expression through methylation of H3K27. EZH2 is the catalytic subunit of PRC2. The lack of EZH2 impairs the differentiation of end effector cells.

Nearly 30 years ago, Moskophidis et al. infected mice with LCMV-D. The presence of a large amount of LCMV-D produced a high antigen load, which forced the depletion of specific antiviral CD8+ cytotoxic T cells. Due to technical limitations at that time, research has discovered phenomena, but has not yet been explained from the molecular mechanism.

In 2007, Whitley et al. used microarray analysis to study the molecular characteristics of CD8+ T cell failure after chronic LCMV infection. It was found that CD8+TEX cells overexpress PD-1 and other inhibitory receptors, express a unique set of transcription factors, and have severe metabolic and bioenergy defects.

These findings reveal for the first time how TEX cells gradually lose their effector functions at the molecular level.

ScRNA-seq technology has opened up a new field for the study of T cell biology. Many initial scRNA-seq studies have detected T cell status in different types of cancer, and CD8+TEX cells are usually preferentially enriched in the tumor microenvironment. Since then, T cell depletion has become an accepted term to describe the response of T cells to chronic infections and cancer.

TOX is a secondary transcription factor induced by NFAT. TOX may not participate in the differentiation of effect and memory T cell states during acute infection. In contrast, in chronic infections and cancers, TOX is a key driver of the CD8+ T cell depletion program.

Studies have found that TOX expression is essential for the formation and maintenance of TCF1+TPEX cells and the subsequent differentiation of terminal TEX cells.

Without TOX, the formation of TPEX cells is impaired, and TEX cells cannot be formed. Tox-deficient CD8+ cells do not up-regulate genes for inhibitory receptors, such as Pdcd1, Entpd1, Havcr2, Cd244, and Tigit.

BATF is a member of the AP-1 family of transcription factors. It forms a dimer with JunB and acts as a repressor of AP-1 activity in activated T cells. Some people believe that BATF is one of the driving factors of exhaustion, and the increase in BATF expression is related to the exhaustion of CD8+ T cells during HIV infection. Silencing BATF in T cells can rescue HIV-specific T cell functions.

In addition, the study found that after LCMV-Cl13 infection, antigen-specific T cells acquire different epigenetic characteristics related to depletion of effector and memory T cells. Although PD-L1 blockade can reactivate the response of T cells to LCMV-Cl13, it is largely unable to reshape the epigenetic characteristics associated with exhaustion. Therefore, it is concluded that the epigenetic stability of TEX cells limits the durability of PD-L1 blocking effect.

Influence of tissue environment and metabolism

The anatomical location and the degree of access to antigens determine the state of T cells. For example, in chronic viral infection studies, more terminally differentiated TEX cells are present in the red pulp of the spleen, which is the main site of LCMV infection. The less differentiated TPEX cells are mainly located in the T cell area of ​​the white pulp.

Does the environment indicate T cell status through ligand binding, nutrient utilization, and local cytokine production? Does the antigen abundance cause excessive TCR stimulation due to proximity, leading to end effector differentiation or depletion? These questions remain to be answered.

However, it is undeniable that environmental factors play an extremely important role in determining the state of T cells. The tissue environment may be an attractive target for improving or inhibiting T cell function.

For example, in the tumor microenvironment, the increase in extracellular potassium caused by cancer cell necrosis inhibits TCR-driven Akt-mTOR phosphorylation and TIL effector function. This inhibitory effect depends on the activity of serine/threonine phosphatase PP2A.

The M2-like inhibitory macrophages in the tumor microenvironment and the exhausted EOMEShiCD8+T cells form a two-way inhibitory interaction, leading to worse clinical outcomes.

Over the past few decades, our understanding of T cell stemness and depleted transcription, epigenetics, and metabolic regulation has made tremendous progress.

These exciting new discoveries about various T cell states and their regulatory factors may give us an in-depth understanding of how to find an entry point for immunotherapy.

As more mechanisms are revealed, finding ways to regulate the fate and function of TPEX and TEX cells will likely completely change the current situation of tumor immunotherapy.