[Nature hot discussion] The new coronavirus is getting more and more intense, but the protective effect of the vaccine is gradually weakening. What should we do?

The COVID-19 epidemic has been raging around the world in recent years, and many people have been vaccinated against COVID-19. However, the immune effect brought by vaccines to humans is not permanent. It will gradually weaken over time. Faced with this problem, how should people deal with the new coronavirus and its mutant viruses? The research of this group of scientists may be helpful for you to understand this problem…

Six months ago, Miles Davenport and his colleagues made a bold prediction. Based on the results of published vaccine trials and other data sources, they estimate that people vaccinated against COVID-19 lose about half of their defense antibodies every 108 days or so. Therefore, a vaccine that initially provides 90% protection for mild cases may only be 70% effective after 6 or 7 months.

Davenport, a computational immunologist at the University of New South Wales in Sydney, Australia, said: “It felt a little isolated at the time.” But in general, his team’s prediction has been realized.

Immunological studies have shown that in vaccinated individuals, the level of antibodies steadily declines. Long-term follow-up of vaccine trial participants shows that the risk of breakthrough infection is increasing. Health care records in Israel, the United Kingdom and other countries all show that the COVID-19 vaccine is losing its effectiveness, at least in terms of controlling infectious diseases.

This also does not take into account the threat of Delta virus-and it is clear that the vaccine-induced antibody does a worse job than the original virus strain in recognizing the SARS-CoV-2 mutation. However, it is not clear to what extent the immune system protection measures that protect vaccinated people from severe illness, hospitalization and death may also disappear. Davenport said: “This is the most important issue right now.”

As the discussion on the booster project heats up-major health agencies around the world publicly opposed the idea this week, British officials support boosters for people over 50, and advisers from US regulators will meet on September 17 to discuss This question, an article in Nature magazine titled “COVID vaccine immunity is waning — how much does that matter?” evaluated the data that provided information for this debate. 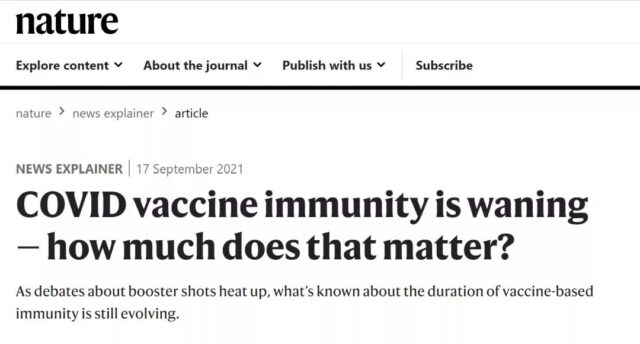 Nicole Doria-Rose, an immunologist at the National Institute of Allergy and Infectious Diseases in Bethesda, Maryland, said: “Things will degenerate over time.” But not everything declines equally. “Neutralizing” antibodies can intercept viruses before they penetrate cells, but such antibodies may not have much staying power. The levels of these molecules usually rise rapidly after vaccination, and then rapidly decrease after a few months. This is how the vaccine works.

But the cellular immune response lasts longer-as the immunologist Jennifer Gommerman of the University of Toronto in Canada explained: “Cellular immunity is something that protects you from disease.” Memory B cells can be deployed quickly when they are exposed to the virus again. More antibodies, they tend to stay around the virus, and the same is true for T cells, which can attack cells that have already been infected. When SARS-CoV-2 passes through the body’s first line of defense, both provide additional protection.

In the only long-term study that considers the three elements of the immune system-antibodies, B cells and T cells at the same time, researchers have found that vaccination can stimulate long-lasting cellular immunity. The number of memory B cells has continued to increase for at least six months, and the battle against the virus has become better over time. The number of T cells remained relatively stable and only slightly decreased during the study period.

John Whery, an immunologist at the Perelman School of Medicine at the University of Pennsylvania in Philadelphia, who led the study, said: “So, you have this reserve. The circulating antibodies may drop, but your immune system is able to function again. “The research of immunologist Ali Ellebedy of Washington University School of Medicine in St. Louis, Missouri helps explain the vitality of memory B cell responses. His research team took samples from the lymph nodes of people who had been vaccinated, and discovered small B-cell sperm breeding sites—the so-called germinal centers. Over time, these germinal centers are producing more effective germinal centers. Immune Cells. The B cells in these structures randomly change their genes to produce a whole new set of antibodies. Those cells that produce the best antibody reserves will eventually win out during evolution, enhancing the immune system’s ability to fight Delta and other worrying SARS-CoV-2 variants.

Ellebedy and his colleagues initially described how these germinal centers lasted 15 weeks after immunization with RNA-based injection vaccines, which is really longer than the duration of older technical vaccines for other diseases that anyone has seen before. long. Now that the researchers have unpublished data, they have conducted a 6-month follow-up study on the germinal center. They will continue to study this.

In most cases, this should be the case. However, as Hatziioannou, a virologist at Rockefeller University in New York, said: “If you are immune from diseases at all levels and rely on circulating neutralizing antibodies, these molecules will decrease significantly. Then, the longer your immunity to COVID-19 will be weakened.”

Real data from diagnostic test records and hospital databases indicate that this may be the case. For example, in Israel, elderly people who were vaccinated at the beginning of this year appear to be at twice the risk of serious illness during the influenza outbreak in July as compared to similar people who were recently vaccinated. Researchers report this week that compared with people who have not been vaccinated, the elderly who received the third dose of the vaccine are less likely to be infected with the virus and less likely to develop a serious illness.

Israel has begun to implement the third dose of the COVID-19 vaccine program, and data on its effectiveness is gradually being released.

For Eran Segal, a computational biologist at the Weizmann Institute of Science in Rehovot, Israel, the impact is clear. Siegel advises the Israeli government on the issue of the COVID-19 virus. There is convincing evidence that: the third dose will significantly improve the protective effect.

But as Jeffrey Morris, a biostatistician at the University of Pennsylvania, pointed out, the inferences drawn from this type of observational study should be viewed critically. People who live a normal life are not participants in clinical trials. They are not randomly assigned to explain behavioral and demographic differences. Although statistical models can help correct some of these variables, it is impossible to explain all potential confounding factors.

Morris said, “The bottom line is that we need to construct a model carefully, and we need really thorough data to solve all these problems.”

Preliminary data from the United Kingdom and Qatar seem to confirm Israel’s experience. Researchers from the Department of Public Health of the United Kingdom released a preprint this week detailing the moderate but considerable decline in the vaccine’s effectiveness against hospitalizations and deaths. This happened about 20 weeks after being vaccinated with Pfizer Biotechnology’s mRNA vaccine and AstraZeneca’s viral vector vaccine, although this effect is most pronounced in the elderly and those with underlying health problems. In the elderly, there are also some signs that the interval between the first two doses of the vaccine can promote longer-lasting protective immunity.

Meanwhile, in Qatar, Laith Abu-Raddad and his colleagues last month described how Pfizer Biotech’s vaccines continue to provide high protection against major diseases for up to 6 months after immunization. As expected, the effectiveness of vaccines against mild or asymptomatic infections has gradually declined. But when he posted a preprinted version on the Internet on August 9th and 27th, Abu-Raddad, an infectious disease epidemiologist at the Weill Cornell Medical College in Doha, was not sure whether an intensified injection was needed.

He saw the data 7 months after the immunization. Although this is only a preliminary result, the vaccine’s ability to avoid hospitalization and death appears to have declined. Data is now forcing people to change their way of thinking. “(A comparable study in the United States so far has only reported data on weakened protection against infection, not data on serious diseases).

However, globally, there are no signs that the incidence of serious diseases in the vaccinated population is rising significantly. Julie McElrath, an infectious disease expert at the Fred Hutchinson Cancer Research Center in Seattle, Washington, said: “Vaccines are actually used to prevent disease, and this situation still exists.”

Reducing the infection rate should help break the cycle of virus transmission, which will ultimately reduce severe COVID-19 cases and deaths. According to Fyodor Kondrashov, an evolutionary geneticist at the Austrian Institute of Science and Technology in Klosterneuburg, it should also help prevent the emergence of vaccine-resistant variants. “It is good from an epidemiological point of view, and it is also good from an evolutionary point of view.” As Kondrashov’s modeling work shows, drug-resistant viruses are most likely to emerge when the spread is not controlled. Getting more people vaccinated is the most effective single intervention to keep transmission rates low, but any increase in vaccine effectiveness will also help.

Andrew Read, who studies the evolution of infectious diseases at Penn State University Park, said that so far, no human vaccine has been completely destroyed by resistance like many anti-infective drugs. “This harms their interests,” but these benefits can be resolved by adjusting the vaccine design.

This is not to say that this will not happen with the COVID-19 vaccine. Read said: “We have entered a new field, the Delta mutant virus is beyond the expectations of the world. The evolution of the virus and the immune response we have can bring more surprises to all mankind.”

But any discussion about booster requirements cannot be carried out in a vacuum. In addition to considering the immune dynamics of immunized persons, the fairness and availability of vaccines also need to be considered. As long as the vaccinated people do not go to hospitals and morgues, then for Katrina Lythgoe, an evolutionary epidemiologist at the University of Oxford in the United Kingdom, the theoretical debate on vaccine resistance is secondary. “In my opinion, in addition to those who are particularly vulnerable, efforts should be made to vaccinate people around the world.