2021 ESMO:  What are the new events in the hepatobiliary field?

2021 ESMO:  What are the new events in the hepatobiliary field?

Up to now, a number of studies have published abstracts, and the field of hepatobiliary is of course no exception.

Up to now, a number of studies have published abstracts, and the field of hepatobiliary is of course no exception.

Following the breakthrough of targeted immune combination in advanced liver cancer, the focus began to shift to adjuvant therapy for early liver cancer; combination therapy is no longer limited to systemic combined series of treatments, and local combined systemic treatments have also begun to get on track. New drugs and new therapies are emerging one after another, so let’s follow the editor to take a look~

1. In patients without MVI or EHS, The relative benefits of the “T+A” scheme remain unchanged

“T+A” first-line treatment has been approved in >70 countries. This study reports the exploratory efficacy and safety of patients without macrovascular invasion (MVI) or extrahepatic spread (EHS) after an additional 12 months of follow-up. At baseline, 111 patients had no MVI or EHS. As of the data cutoff on August 31, 2020, the mOS of the “T+A” group was 24.6 months, and that of the sorafenib group was 18.1 months; mPFS was 9.6 and 8.3 months, respectively.

“T+A” is the standard treatment for patients with unresectable liver cancer. In patients without MVI or EHS, the absolute results are improved compared to ITT. The safety results are consistent with the ITT population. 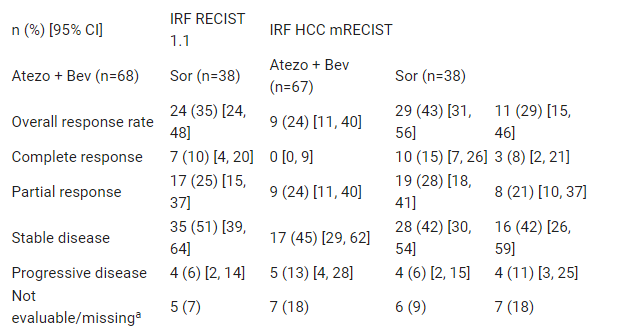 This time, the researchers announced the latest results of untreated advanced HCC patients (cohort 2) based on an additional 6 months of follow-up. All 51 patients in cohort 2 received ≥1 dose of pembrolizumab.

The results of the study showed that the ORR was 16%, which was similar in most subgroups.

One treatment-related death occurred in myocarditis with immune-related hepatitis.

This is a phase II clinical trial conducted in China to evaluate the efficacy and safety of KN046 combined with lenvatinib in the treatment of advanced unresectable or metastatic hepatocellular carcinoma. As of April 8, 2021, a total of 25 patients were enrolled, with a median treatment duration of 10 weeks.

Bavituximab is a chimeric monoclonal antibody targeting phosphatidylserine (PS), which can modulate the activity of PS. Bavituximab can block the binding of PS to a variety of immune cell receptors (including TIM and TAM), block immunosuppressive signals, and reverse the PS-mediated immunosuppressive process, so that the immune system can recognize and fight tumor cells.

Preliminary analysis shows that Bavituximab combined with pembrolizumab may have good anti-tumor activity in advanced HCC.

The latest data from the study, including its correlation with tumor biomarkers, will be formally displayed at the conference.

6. HAIC+Karelizumab+Apatinib: The triple plan demonstrates the strength of joint treatment

Combination of anti-angiogenesis and immune checkpoint blocking therapy has been proven to improve the clinical prognosis of advanced HCC. This phase II trial (NCT04191889) aims to evaluate the efficacy and safety of transarterial infusion chemotherapy (HAIC) combined with carrelizumab and apatinib in the treatment of advanced liver cancer. 26 eligible patients were included in the study.

In summary, the triple therapy of HAIC, apatinib and carrelizumab has good clinical efficacy and acceptable safety for BCLC-C HCC.

At this meeting, the updated survival data of the CA209-678 study was provided, and the safety and efficacy results were analyzed again after a median follow-up of 24.8 months. In this study, eligible Child-Pugh Class A aHCC patients were treated with Y90-RE, followed by 240 mg of nivolumab, once every 2 weeks.

The median time to remission was 3.8 months. The updated median PFS was 5.6 months, and the median OS was 16.9 months.

The most common pattern of progression is new intrahepatic lesions. 81% of patients experienced treatment-related adverse reactions (trAEs), of which 14% were G3/4, and no G5 trAEs occurred.

When comparing the ALBI scores on treatment and baseline, no significant changes were observed. Among the 19 patients with HBV DNA VL detected, 22 cases (61.6%) were hepatitis B, and the median HBV DNA VL was 120IU/mL.

All patients received antiviral treatment, and there were no cases of HBV reactivation. As of the data cutoff date of January 31, 2021, 5 patients are still receiving treatment.

This is a multicenter, open-label, single-group, phase II trial to evaluate the effectiveness and safety of lenvatinib combined with HAIC in the treatment of advanced liver cancer (HCC). Among the 34 evaluable patients, the Independent Review Committee (IRC) evaluated ORRs based on mRECIST and RECISTv1.1 standards of 64.7% and 45.7%, respectively.

There are no treatment-related deaths. It is necessary to further evaluate this program in a phase III trial.

Preclinical studies have shown that thermal ablation can induce immunogenic cell death and enhance the effect of anti-programmed death-1 (PD-1).

This open-label Phase I/II trial evaluated the safety and effectiveness of ablation combined with teriprizumab in the treatment of advanced liver cancer (HCC).

Patients with advanced HCC who had received at least one systemic treatment failure were included and randomly divided into 3 groups. In group A, patients received teriprizumab monotherapy (240mg, Q3W).

Forty-eight patients (16 cases in each group) were included in the study. 75% of patients experienced treatment-related adverse events (TRAE).

18.7% of patients in group A reported grade 3/4 TARE, and both groups B and C were 25.0%. There was 1 patient in group A and group B each discontinuing teriprizumab treatment due to TRAE. No TRAE leads to death.

Therefore, it is recommended to start tolipa anti-treatment on the 3rd day after ablation for phase II evaluation.

The results of the study showed that among the 45 patients, there were 25 CNLC stage II patients and 20 CNLCI stage patients.

It can be seen that this combination program has shown promising efficacy and is well tolerated in postoperative CNLC II-III HCC patients, and further research is necessary.

This time, the researchers reported the latest results of the Lance study, which evaluated the effectiveness and safety of lenvatinib combined with TACE and TACE alone as an adjuvant treatment for patients with high risk of recurrence after liver cancer resection. The cohort has been expanded to 184 patients.

It can be seen that in the expanded cohort, lenvatinib combined with TACE showed a longer DFS than TACE alone for patients with a high risk of postoperative recurrence. There were no unexpected adverse reactions in the combination group.

OBP-301 is a new, replication-competent adenovirus regulated by the human telomerase reverse transcriptase gene (hTERT) promoter. Its replication, oncolysis and spread are limited to cells expressing the hTERT promoter, which is highly expressed in various human cancers including liver cancer.

Researchers evaluated the safety and effectiveness of intratumoral injection of OBP-301 in the treatment of advanced hepatocellular carcinoma (HCC). An open-label, phase I dose escalation trial (3+3 design) was conducted on 20 patients with advanced HCC who progressed after standard treatment. The results of the study show that single and multiple doses of OBP-301 are well tolerated.

The most reported TEAE related to OBP-301 was influenza-like illness (30.0%), followed by fever (15.0%), fatigue, decreased platelet count, abdominal distension and anemia (10.0% each). The overall intrahepatic mRECIST response was observed in 7 subjects (39%) with stable disease (SD) and 11 (61%) subjects with progressive disease (PD).

14 SD patients (78%) and 4 PD patients (22%) had the best target response. Multiple IT injections of OBP-301 are well tolerated in advanced HCC. Although the anti-tumor activity of the study drug alone cannot be proven, it is clear that the SD for the best local response is significantly higher than the overall response.

1. Nivolumab combined with chemotherapy in the first-line treatment of biliary tract tumors

This time, the researchers reported the single-arm phase II clinical results of nivolumab combined with modified GS as the first-line treatment of aBTC patients.

The median progression-free survival and overall survival were 8.0 months and not reached, respectively.

All grade 3/4 chemotherapy-related adverse events (AEs) were less than 7%; 14 patients (35.4%) had symptoms related to skin toxicity (14.6%), hypothyroidism, hypothyroiditis and pneumonia (both 6.3%) Immune-related AEs.

Nivolumab combined with modified GS is a promising and safe solution, and it is worthy of further study for the treatment of Asian aBTC patients.

Pemigatinib is a selective FGFR inhibitor, showing a high degree of effectiveness and tolerability in patients with cholangiocarcinoma. It has been confirmed in the Fight 202 study that the ORR is 35.5%. What is released this time is its research data in the Chinese cholangiocarcinoma (CCA) population.

Three subjects developed SAEs, which were rectal polyps, abnormal liver function, and bile duct infection. There was no discontinuation of treatment and death due to TRAE. It can be seen that Pemigatinib is very effective and tolerable in patients with relapsed or metastatic CCA with FGFR2 fusion or rearrangement in China.

At present, the listing application of Pemigatinib has been accepted by NMPA, and we look forward to its approval as soon as possible to benefit Chinese patients!

MIV-818 is administered as an oral capsule. MIV-818 is a targeted drug targeting the liver. Based on promising preclinical and clinical data, MIV-818 has the potential to become the first liver cancer targeted drug.

In addition to liver cancer, MIV-818 can also treat intrahepatic cholangiocarcinoma, which accounts for about 3-5% of liver cancer cases.

On May 8, 2020, the U.S. Food and Drug Administration (FDA) has granted MIV-818 Orphan Drug Designation (ODD) for the treatment of the most common primary hepatocellular carcinoma (HCC).

Nine patients can be evaluated in this phase I study, with a median age of 64 years, HCC (5 cases), mixed HCC/iCCA (1 case), iCCA (1 case), liver metastases from gastrointestinal solid tumors (LM , 2 cases), received a median of 2 systemic treatments before.

The initial dose of MIV-818 is 40 mg, for 5 consecutive days, 21 days as a cycle. The most common treatment emergency AEs occur in the blood system. Among the 9 patients, 1 patient experienced DLT (macular papules grade 3) in the first treatment cycle. The longest treatment time is 9 cycles (1 patient).

Tumor biopsy revealed selective, drug-induced DNA damage in tumor tissue, measured as phosphorylation of histone H2AX, while MIV-818 had little or no effect observed in healthy liver tissue. MIV-818 has acceptable safety and tolerability, and hematological inhibition is the most common AE.

Biomarker data from liver biopsy shows that MIV-818 has a selective effect on cancer cells. In the future, the effect of MIV-818 combined with other drugs in the treatment of HCC patients will be evaluated.

Here, researchers report the safety and effectiveness of SHR1701 combined with Famitinib in the treatment of previously treated patients with advanced pancreatic cancer (PC) and BTC.

The most common grade 3 TRAE was increased bilirubin conjugates (2 patients), and there were no reports of grade 4/5 adverse events.

In patients with advanced PC or BTC, the combination of SHR1701 and Famitinib showed good activity and tolerable side effects. The full results will be announced at the conference.