Serotonin is a neurotransmitter, also known as happiness hormone because it is good for mood. In patients with depression, the concentration of serotonin in the brain decreases.

This hormone also affects many other functions of the body. Most serotonin is not in the brain, but stored in the platelets.

TPH is encoded by two genes, TPH1 and TPH2. The production of serotonin in the central nervous system and neurons is completely dependent on TPH2, and TPH1 is mainly expressed in enterochromaffin cells of the intestinal mucosa, absorbed by platelets, and released at sites of inflammation or injury.

As an important inflammatory mediator, serotonin affects immune function and is also related to cell proliferation and cancer. However, the effect of serotonin on the tumor microenvironment is unclear.

The study constructed a peripheral serotonin-deficient (Tph1−/−) mouse, which has enhanced accumulation of functional CD8+ T cells, so pancreatic and colorectal cancer tumors are not easy to grow in such mice.

The administration of antidepressants can promote the effect of PD-1 checkpoint blockers and long-term control of tumors.

Therefore, antidepressants combined with immunotherapy can help improve the treatment of pancreatic cancer and colorectal cancer that have been incurable so far.

First, in order to test the effect of serotonin on tumor cell lines, the research team injected colorectal cancer cells or pancreatic cancer cells into the skin or body of serotonin-deficient mice. Compared with tumors in wild-type control mice, tumor cell lines in mice lacking serotonin have delayed growth and prolonged survival of mice. Clopidogrel or Prasugrel, a platelet activation inhibitor, inhibits the release of serotonin by blocking platelet activation. Both drugs can reduce tumor growth in wild-type mice to a tumor volume comparable to that of serotonin-deficient mice. The above results indicate that serotonin comes from platelets and tumor growth depends on serotonin.

In order to answer how peripheral serotonin promotes tumor growth, the research team collected tumor tissues from serotonin-deficient mice to detect the expression of vascular system, hypoxia, cell proliferation, chemokines, interleukins, and apoptosis-related markers. The analysis showed that compared with wild-type mice, the number of CD8+ T cells in the tumors of serotonin-deficient mice increased. Correspondingly, the accumulation of CD8+ T cells in the tumors of mice treated with the serotonin release inhibitor fluoxetine was enhanced. The above results confirm that serotonin inhibits the function of CD8+ T cells and promotes tumor growth. 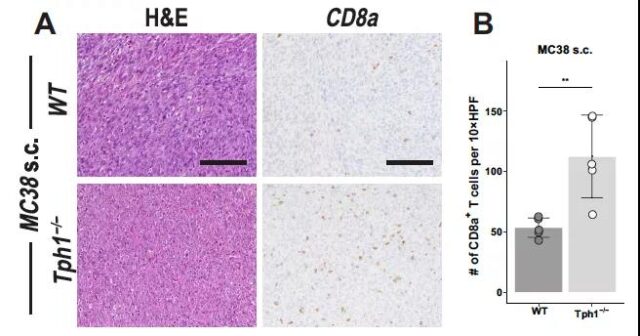 In order to understand how serotonin impairs the accumulation and function of CD8+ T cells in the tumor microenvironment, they studied the tumor immune characteristics of serotonin-deficient mice and found that compared with wild-type mice, the tumors of serotonin-deficient mice under-express PD -L1/CD274. Subsequently, the research team constructed tumor cells deficient in PD-L1, which grew much slower than WT cells and increased the accumulation of CD8+ T cells. These experiments show that the expression of PD-L1 in cancer cells is related to increased tumor growth and decreased CD8+ T cell accumulation in tumors.

Finally, they investigated whether the reduction of serotonin content in platelets inhibited tumor growth in a therapeutic setting. They injected the wild-type mice with cancer cells subcutaneously and gave them: control injection, continuous fluoxetine monotherapy, double anti-PD-1 monotherapy or fluoxetine plus anti-PD-1 combination therapy. Compared with the control group, both monotherapy reduced tumor growth and increased the infiltration of CD8+ T cells in the tumor. Compared with monotherapy, the combination therapy showed a gain effect, improved tumor control and CD8+ T cell infiltration, and was able to eradicate large tumors in 20% of mice.

In summary, the study shows that classic antidepressants can help improve cancer treatment. Antidepressants reduced serotonin levels in the peripheral circulation, enhanced tumor CD8+ T cell infiltration, and slowed the growth of pancreatic and colon cancers in mice. When combined with immunotherapy, antidepressants can prevent cancer progression in the long term.