With the advancement of science and technology and the development of medicine, many diseases that have left ancient physicians at a loss have been alleviated one by one, or even completely cured. However, cancer, as the “king of all diseases”, is like a moat that is difficult to conquer. It has not yet been defeated by humans.

Deciphering the mechanism of cancer occurrence and development is crucial for cancer treatment. Mutations in tumor suppressor genes are believed to be an important cause of cancer. Scientists have long believed that gene mutations promote uncontrolled growth of cancer cells. However, a recent study shows that the actual situation is much more complicated than this.

The study found that there are more than 100 mutated tumor suppressor genes that do not directly act on cancer cells and encourage them to grow wildly. Instead, they use a “curve to save the country” method-preventing the immune system from recognizing and destroying tumor tissues. This is the real reason for the uncontrolled proliferation of tumor tissues.

It is well known that many cancer cell lines have the potential to proliferate indefinitely, which is thought to be the result of tumor suppressor gene mutations. But usually, the immune system treats cancer cells as an emerging pathogen and tries to eliminate them. Therefore, it is not enough that cancer cells have the ability to proliferate indefinitely. They must also evolve the ability to escape immune system surveillance through genetic mutations.

For example, this is like in the famous science fiction movie “The Matrix”, the protagonist Neo (cancer cells) will be chased by countless people in black (immune system) after leaving the control of the “matrix” (human body). If Ao wants to be free, he must completely defeat or pretend to hide from the man in black. For cancer cells, the latter is undoubtedly easier to do.

In this study, the research team used CRISPR technology to construct 7,500 tumor cell lines with single mutations in tumor suppressor genes and implanted these cells into mice. These mice were also divided into two groups. The immune system of wild-type mice in the control group was intact, and the experimental group was immunodeficient mice.

Researchers use genetic analysis to determine which mutated genes play a role in tumor formation. They found that in each tumor cell line tested, compared with immunodeficient mice, tumors grown in wild-type mice had a significant enrichment of tumor suppressor gene deletions. Among them, one-third of tumor suppressor genes are through immune evasion. 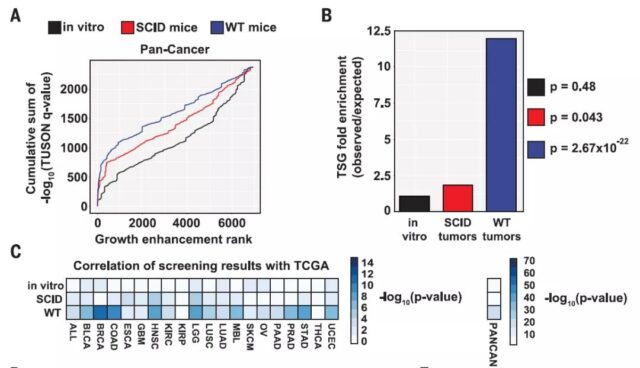 The research team also focused on a special gene-GNA13, and clarified the mechanism of this process. Through in-depth study of the gene, the researchers found that the mutation disguised cancer cells, making it impossible for the T cells of the immune system to detect them.

Dr. Stephen Elledge, the corresponding author of this study, said: “It is shocking that these genetic mutations are teaching cancer cells how to evade the immune system, rather than simply saying ‘grow, grow, grow!’”

Mutated tumor suppressor genes and the proteins they produce are common targets in cancer drug development, but some are frustratingly elusive, such as p53. Earlier this month, a team from Vanderbilt University published a study that showed that chromosomal abnormalities in aneuploidy are common in cells with p53 mutations. They believe that this discovery can be used to target this abnormal protein. Provide information on drug development.

In addition, in June this year, Galina Selivanova and others of Karolinska Institute in Sweden published an article on Cancer Discovery showing that normal p53 can be reactivated by MDM2 inhibitors. Therefore, MDM2 inhibitors combined with other drugs that suppress immune checkpoints can better inhibit the growth of cancer cells.

Dr. Stephen Elledge believes that their research provides a list of tumor suppressor genes, which helps scientists better understand how cancer evades the immune system. He said: “Tumors may use hundreds of ways to achieve immune evasion, and the discovery of these pathways may inspire new ways to treat cancer.”