Vaccination rate only 33%: News cases and deaths in Russia is increasing

Vaccination rate only 33%: News cases and deaths in Russia is increasing.

The vaccination rate is only 33%, and the number of confirmed cases and deaths in Russia is increasing day by day.

For 20 consecutive months, Yevgeny Ryabov witnessed patients with COVID-19 coming in and out of a Moscow hospital. Some people walked out alive, while some people’s lives stayed forever at a certain moment.

Time and time again, Ryabov watched the new coronavirus devastating the patient’s body. Some people who are dying will regret that they have not been vaccinated.

“They usually find some excuses to delay until ‘tomorrow’, but unfortunately, they don’t have a tomorrow.” Riabov said in an interview with Agence France-Presse on October 22nd.

Recently, shocking news about the Russian epidemic has followed one after another. Data from the TASS News Agency on the afternoon of October 26 showed that the number of confirmed cases in Russia in the past 24 hours reached 36,466, and the number of deaths was 1,106, the highest since the outbreak.

So far, the total number of confirmed cases in Russia has reached more than 8.3 million, and the death toll has exceeded 230,000.

Earlier on October 20, Russian President Vladimir Putin officially announced that due to the spread of the epidemic, the country will take a 9-day paid vacation from October 30 to November 7, and local governments can also take the holiday in advance or extend the holiday according to local conditions. . It has aroused strong attention and rushing reports from the media of various countries.

But behind this, it is reflected in the Russian epidemic prevention policy, government structure, and various problems in the consciousness of the people. The combination of these elements has led to a situation that now seems “out of control”. 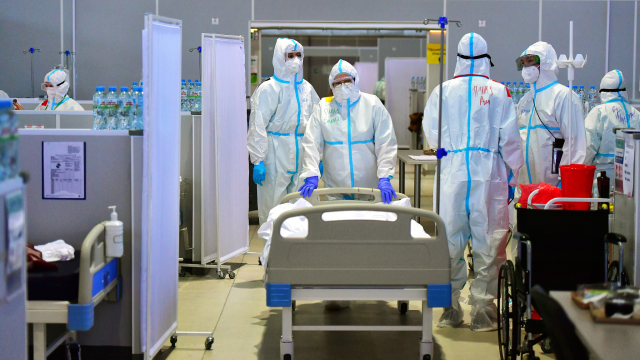 Serious situation in the Russian hospital”

Since the outbreak of the COVID-19 epidemic, Russia has experienced several waves of cases. In the winter of last year, the number of confirmed cases in Russia has risen from an average of around 5,000 to more than 20,000. 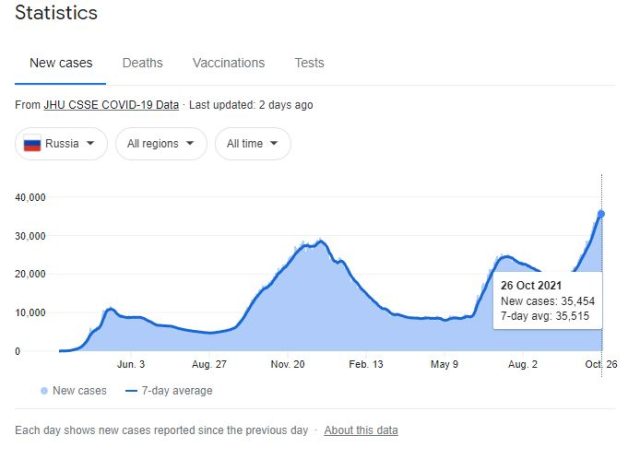 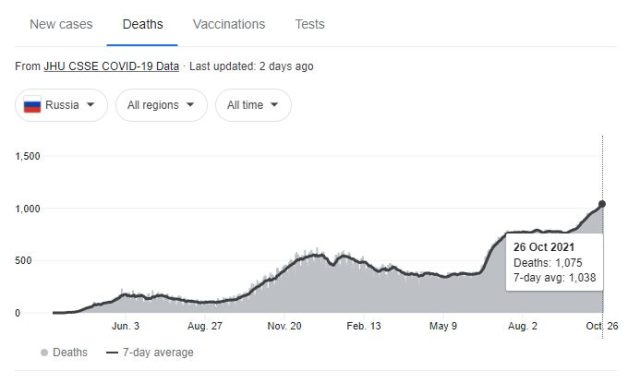 There are also some appalling images spread on Russian social media VK. According to the report of the American “Daily Beast”, in a hospital in Novouralsk, Russia, a patient who died of COVID-19 pneumonia was lying on a bed without any care. The person posting the video ran in the hallway, screaming hoarse, and wanted the medical staff to stop and take care of the dead. But in the video for more than a minute, no one responded to her request. 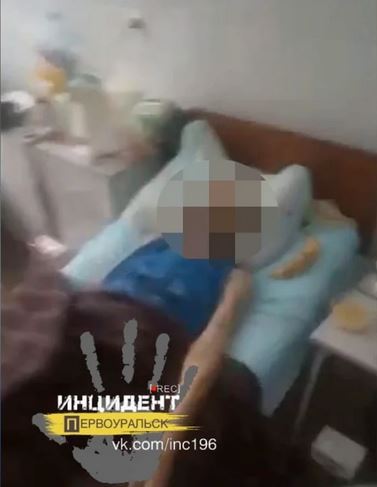 A scene from a hospital circulated on VK

Later, Oksana Kuznetsova, the niece of the deceased, said in a blog that her uncle Vadim was admitted to the hospital on October 5, but there was no time to look after him. he. The person who filmed the video later told Kuznetsova: “He died of suffocation. I went to get a doctor, but there was no one.” Vadim finally died on October 12.

After the video went viral on social media, the local investigation committee began investigating the case. In the end, the local government decided to fire Victor Dolgushin, the head of the hospital.

However, the “Daily Beast” believes that behind this scene is that Russian hospitals are currently being strongly impacted by a new round of epidemic. The shortage of medical staff is exacerbating this crisis. Some retired medical staff also returned to the front line to fight the epidemic.

On the 22nd, officials said that Russia’s hospital beds were quickly used up. The authoritative Russian epidemiologist Denis Protsenko also said that the situation was “near critical” that day, and vaccination was at a standstill.

As early as before the advent of the Russian “Satellite V” vaccine, five colleagues of Ryabov had died of COVID-19 pneumonia. But after the vaccine came out, all he saw in the hospital was “pray and regret.”

Olga Ryzhko, a 51-year-old architect who has already gotten rid of a serious illness, lay on a hospital bed and said: “I know, if they (medicine) didn’t save me, I wouldn’t be here.” She is not a person. Anti-vaccination people, but have been delaying vaccination.

Of course, not everyone is as lucky as Lizko. In the past month, the woman who shared the intensive care unit with Lizko has been actively encouraging her to continue fighting the disease. But this Monday (25th), she unfortunately passed away due to COVID-19 pneumonia.

Why is the vaccination rate of the first registered vaccine so low?

Many experts and media, including Ryabov, attribute the current situation in Russia to low vaccination rates. According to “Our World in Data”, Russia has currently received 101 million doses of vaccine, and 47.9 million people received two doses, accounting for 33.2% of the total population.

However, on February 2 this year, the internationally renowned medical journal “The Lancet” published an article stating that the latest interim analysis results of the Phase III clinical trial of the Russian “Sputnik V” vaccine showed that the effectiveness of the vaccine can reach 91.6%.

Many Western media believe that the non-cooperation of the people is another major reason why the epidemic in Russia has not been alleviated. Except for the anti-blockade demonstrations that broke out from time to time, the people did not cooperate with the prevention and control measures, and the news of not being vaccinated frequently appeared in the newspapers.

For example, Charles Maynes, a Russian correspondent for the US National Public Radio (NPR), claimed that although third-party agencies have verified the effectiveness of Russia’s “satellite V” vaccine, Russians do not trust their country’s “saturation”. Conspiracy and the official media that promotes distrust of everything”, which also makes many people deny the effectiveness of the vaccine.

A 73-year-old man named Markov told the Canadian Broadcasting Corporation (CBC) this month that he had not been vaccinated due to “potential health problems.” “I don’t think it’s right for them to force people to do this (vaccinations). Older people receiving pensions have become’targets’ again? This is totally unacceptable.”

This is true not only for the elderly, but also for the young. Elena Romachenko, 34, believes that a person can control his health. “Eat well and exercise,” she said. “Go to a resort, go to the beach, go to the mountains, and you will be healthy.”

But Pavel Volchkov, head of the Genome Engineering Laboratory at the Institute of Physics and Technology in Moscow, believes that most people who refuse vaccination do not oppose the vaccine, but think they No vaccine is needed.

“I call it superhero syndrome.” He concluded.

In order to promote the vaccine, many places in Russia have issued lottery tickets, bonuses and other incentives to speed up the injection. Moscow has even introduced semi-mandatory measures. Starting from next Monday, if people over 60 have not been vaccinated or have been infected with the virus, they must stay at home until February 25.

Putin has repeatedly called on the public to be vaccinated. On the 20th local time, he held a video conference with Russian government officials, calling on the Russian people to actively vaccinate, saying that vaccinations are better than being infected with the COVID-19 virus.

Putin announced a holiday on the 20th

Putin said that day: “It’s best to get vaccinated. Why wait for the disease and its serious consequences?”

Putin also said: “I once again call on all of our people to actively vaccinate (vaccinations). This is about your protection, your safety, your lives, and finally the health of your loved ones.”

The low vaccination rate has kept the number of deaths in Russia at a high level. At present, the number of daily confirmed cases in the UK is similar to that of Russia, with a high of around 36,000 cases. However, the average daily death case in the UK is hovering around 100, which is far lower than the more than 1,000 cases in Russia.

How did the Russian epidemic get to this point?

From the very beginning, Russia’s foreign prevention and control policy seemed to go in the wrong direction. After the outbreak in Wuhan, Russia immediately closed the Sino-Russian border ports in the Far East and suspended the issuance of paper or electronic visas to Chinese citizens, and subsequently strictly restricted the entry of people from affected areas such as South Korea and Iran. The problem is that the real threat comes from Europe, not China.

It was not until March 13 when the World Health Organization declared that Europe had become the hardest-hit area, Russia began to restrict flights between the European Union and Switzerland, but flights from Moscow to European capitals remained unimpeded. It was only on March 27 that the suspension of all international flights was finally announced.

Subsequently, many places in Russia have implemented measures such as lockdowns and home isolation. However, the disparity between the government of the Russian Federation and local governments, as well as the non-cooperation of the people, has never allowed Russia to implement a complete “blockade” in the true sense.

Last year, Russia repeatedly broke out anti-blockade demonstrations. During this year’s European Cup, the scene where many fans gathered together without wearing Kou Zhai was even more shocking.

The Guardian reported that the streets of Moscow were full of vitality last Friday (22nd) night. In a bar called Simach in the city center, sweaty people are dancing, and there are long lines outside. “Looking at the crowd, you can easily forget that Russia is the center of the global COVID-19 pandemic.”

“Thank God, we can go to bars without any restrictions. I oppose any blockades, they will ruin my business,” said 34-year-old Natalia Draganova. She runs a small clothing store in Moscow.

Yuan Quan, a columnist for Observer Network and a teacher of the School of Humanities and Social Sciences at Harbin Engineering University, wrote an article that the outbreak of the epidemic reflects the inefficiency of the Russian political system. Russia’s political system is actually a bottom-up federal system with power sources, and local powers are very large and intertwined. Although Putin took a series of measures to “cut the vassal vassal” after he came to power, to a certain extent he brought power back to the central government, but he still could not effectively implement the state’s decree to the grassroots level.

On October 20th, Putin adopted the suggestion of Deputy Prime Minister Golikova that from October 30th to November 7th, the country will take at least 9 days of paid vacation. In fact, this is not the first time Putin has taken a holiday because of the epidemic. In March of this year, Putin announced a national holiday for a week due to the epidemic; in May, Putin issued a presidential decree linking Labor Day to the Victory Day holiday, and the country will have 10 consecutive days of holiday. The previous holidays and work stoppages have not effectively contained the epidemic. So, can the current holiday measures really have a good effect?

It is almost impossible for the Russian government to continue to implement anti-epidemic measures. Since the outbreak of the epidemic, the government has been swinging back and forth between controlling the epidemic and developing the economy. Russia’s economic development under the impact of the epidemic has stalled. If work and production are not resumed as soon as possible, economic problems may evolve into political and social problems. This has caused the Russian state to tighten and loosen the prevention and control of the epidemic.

Vaccination rate only 33%: News cases and deaths in Russia is increasing