Physicians have long recognized that certain acute cardiovascular diseases (such as endocarditis, myocarditis, and pericarditis) are related to inflammation.

Attention to the involvement of immune and inflammatory mechanisms in chronic cardiovascular diseases is generally lagging behind.

However, these pathways contribute to a wide range of clinically important cardiovascular diseases, including acute and chronic.

The collection of articles presented on this focal issue of cardiovascular research aims to promote this goal.

Immune and inflammatory mechanisms are involved in acute myocarditis, and the infectivity has been confirmed.

People have a certain understanding of the pathogenesis of acute viral myocarditis.

Originally thought to be mainly enteroviruses, such as Coxsackie B , parvovirus and herpesviridae, it has now become the main cause of viral myocardial diseases.

Recently, human immunodeficiency virus and SARS-Co-V2 have entered the lexicon of the etiology of viral myocarditis.

Whether the common heart damage in COVID-19 can cause long-term abnormalities in heart contraction, rhythm, or autonomous control is still an area that needs further observation and research. Chronic cardiac remodeling and fibrosis is a new unified concept, a common feature of many myocardial diseases, and involves inflammatory mechanisms. For example, these processes often involve transforming growth factors and proteases under the control of inflammatory mediators.

After ischemic injury, both innate immunity and adaptive immunity play an important role in regulating the clearance and repair of damaged cells. The recent surge in the biological understanding of myocardial healing may lead to new therapies that regulate poorly remodeling and excessive fibrosis during infarct tissue healing. These interventions can prevent the destruction of ischemic cardiomyopathy, which is the main challenge to function and quality of life after myocardial infarction .

More chronic myocardial infectious diseases, such as South American cardiomyopathy, undoubtedly involve inflammation and immune response failure. Sarcoidosis is characterized by the formation of tissue-destructive non-caseating granulomas, which obviously depends on the inflammatory pathway, but the driving factors and specific treatment are still unclear.

Valvular heart disease is also closely related to innate and adaptive immunity. The inflammatory mechanism obviously destroys the valve damage of acute infective endocarditis. The relationship between rheumatic heart disease and inflammation and immunity has long been recognized. Valve and heart damage in rheumatic fever can be caused by antigenic mimicry between streptococcus and heart antigens.

More and more people now recognize the involvement of inflammation in aseptic valvular disease. Certain other valvular diseases, traditionally attributed to degeneration, have traditionally ignored the role of immunity and inflammation in their pathogenesis. However, it is now recognized that valve diseases ranging from myxoma degeneration to calcification of the aortic valve ( and other heart structures ) may depend on immune and inflammatory mechanisms. 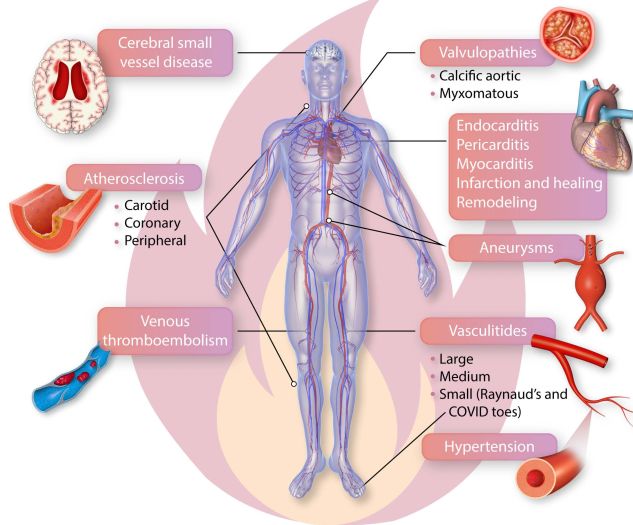 In short, people’s awareness and knowledge of the involvement of immunity and inflammation in cardiovascular disease has grown rapidly. In fact, most cardiovascular diseases involve an inflammatory response that depends on cells, mediators, and immune system pathways to produce a protective mechanism against the host. The emerging concept links the age dependence of cardiovascular disease with changes in the immune response, that is, the inflammatory response. This increasing understanding has opened up new prospects for the basic mechanisms of disease, which has aroused great interest in the research community.

In addition, people have expanded their understanding of cardiovascular system immunity and inflammation, and this application is expected to lead to more and more precise new therapies. Therefore, the collection of contributions to the focus of cardiovascular research should help the research and clinical communities to harvest the results of these advances.