Studies have shown that men experience more emotional pain than women when they break up.

People have always had a stereotype that men invest less in the emotional relationship between the sexes, but is this really the case?

Recently, researchers from Lancaster University in the United Kingdom and the University of Zurich in Switzerland published a research paper titled “Dirty laundry: The nature and substance of seeking relationship help from strangers online” in the Journal of Social and Personal Relationships.

The study shows through big data analysis that when faced with a deterioration in emotional relationships, men tend to experience emotional pain more easily than women.

The research team used natural language processing methods to analyze the statistical and psychological characteristics of more than 184,000 people who posted interpersonal problems on the anonymous online forum Reddit. Then, from the statistics, determine the topics that appear most frequently in the discussion posts to create a “graph” of the most common relationship problems.

The results of statistical analysis show that the most frequently mentioned problem is communication. Nearly one-fifth of the people have encountered communication barriers that make it difficult to discuss the problem, and one-eighth mentioned the issue of trust in interpersonal relationships. 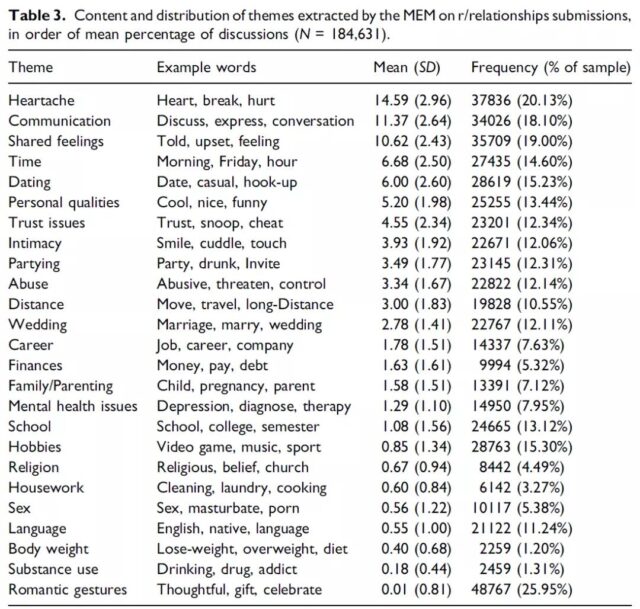 These data also found unexpected results before, including gender differences in interpersonal problems. The leader of the study, Dr. Ryan Boyd, said, are men really less emotionally invested than women? Or are men being stigmatized for sharing their feelings?

Analysis shows that when people talk about their relationship problems, the most common themes mentioned are the emotional pain caused by these problems, not the problems themselves. The most common topic is “Heartache”, and these topics are filled with words such as regret, breakup, crying, and heartbreak.

Contrary to people’s stereotypes, the results of this study show that men talk about heartache (heartache) significantly more than women. These findings suggest that the stereotype that men invest less in emotional relationships may be inaccurate. The fact that men discuss the subject of heartache more often emphasizes that men are at least as emotionally affected by relationship problems as women. 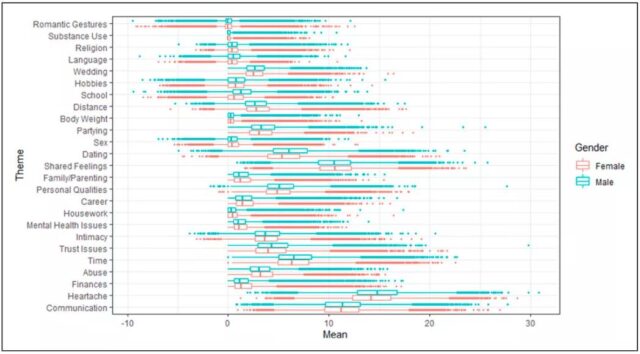 In traditional society, it is a shame for men to share emotions and seek help, but this stigma is largely eliminated on the Internet. At this time, men seem to be as committed to solving problems in emotional relationships as women.

The research team said that these findings are helpful to the public and clinical research. A more accurate description of emotional relationship problems can help to better understand when and why our relationship has problems. This may also help couples. /Couples avoid the most common emotional setbacks.

More importantly, this research reminds us that we can make extremely accurate descriptions of the emotional relationship problems that people face in daily life based on what people say on the Internet.

This also gives us great hope-we can ask for help through the Internet. Behaviors have a better understanding of various types of social and psychological problems, which was not possible with previous traditional research methods.