What factors are related to the therapeutic effect of targeted CD19-CAR?

The impact factor is as high as 44.5. The latest research: What factors are related to the therapeutic effect of targeted CD19-CAR?

And Tisagenlecleucel was approved by the US Food and Drug Administration in 2017, and added tools for targeting B cells and other immunotherapeutics, such as the CD3-CD19 bispecific T cell adaptor antibody construct blinatumomab.

Although CD19 targeted therapy has achieved good results, recurrence is still a serious problem. In the clinical trial of Tisagenlecel, the 24-month recurrence-free survival rate (RFS) of patients who achieved CR was 62%.

Whether it is CD19-CAR or Blinatumomab, the common mechanism of recurrence is the down-regulation or escape of the target antigen. In view of the potential of CD19 regulation, continuous targeting of CD19 may increase the risk of unresponsiveness or relapse.

Due to concerns about CD19-negative escape, risk of recurrence, CD19-CAR non-response, and increased use of Blinatumomab and CD19-CAR, Professor Regina M Myers and his team have recently conducted related studies on these issues, trying to evaluate Blinatumomab exposure and follow-up The relationship between CD19-CAR treatment results.

Researchers conducted a multicenter retrospective study on children and young patients with relapsed or refractory ALL who received CD19-CAR treatment from 2012 to 2019.

The main study endpoints are 6-month recurrence-free survival (RFS) and event-free survival (EFS), stratified according to the treatment plan of Blinatumomab. 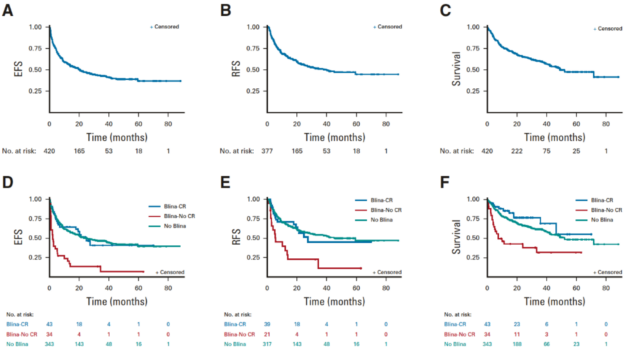 This study is by far the largest series of studies in children’s CD19-CAR studies and the first study on the effects of continuous targeting of CD19.

The study proved that: Blinatumomab non-response and high disease burden are independently associated with poor RFS and EFS, and determine an important indicator of long-term prognosis after CD19-CAR.

What factors are related to the therapeutic effect of targeted CD19-CAR?