Why the COVID-19 Delta variants mysteriously faded in Japan?

Why the COVID-19 Delta variants mysteriously faded in Japan?

What’s the situation? The number of new cases has fallen off a cliff! The Delta vairants mysteriously faded in Japan. . .

As of the evening of the 24th, in the past 24 hours, there were 77 new confirmed cases of COVID-19 in Japan, of which only 5 new cases were confirmed in Tokyo.

The fifth wave of the COVID-19 epidemic in Japan has almost disappeared, so that some scientists are confused about the reason for its disappearance.

A research team speculated that this highly contagious Delta strain had undergone some mutation in Japan, leading to its extinction.

Is the Delta strain heading for self-death?

In mid-August, Japan experienced a peak period of new coronavirus infection, with more than 23,000 new cases in a single day. Today, this number is only 77, and the number of deaths in a single day this month has mostly remained in the single digits. 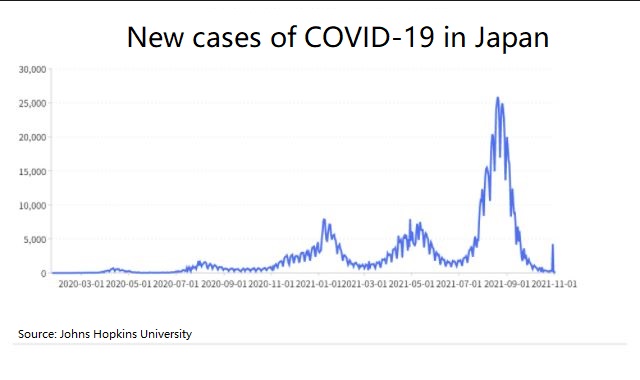 Many people attribute this decline in the number of cases to high vaccination rates, public acceptance of masks, and other factors, but some researchers say the decline in Japan is significant compared to other countries with similar conditions. And unique.

Ituro Inoue, a geneticist at the National Institute of Genetics in Japan, believes that Japan is fortunate to have witnessed the Delta strain largely disappearing on its own after the eradication of other new coronavirus variants.

According to the report, for some time, Inoue and his colleagues have been studying the mutations of the new coronavirus and how they are affected by an enzyme called “nsp14”, which is essential for the reproduction of the virus.

According to the research team, RNA viruses such as the new coronavirus often have a very high mutation rate, which helps them quickly adapt to changes in the environment. However, this opens the door to the so-called “error disaster”. When the accumulation of error mutations will eventually lead to the complete extinction of a certain strain, the “nsp14” enzyme seems to provide a kind of “error proofreading” to help virus genes maintain Below the threshold of “error disaster”.

Inoue Yilang believes that when the fifth wave of the epidemic spread in Japan, based on genetic studies on samples collected from June to October, the “nsp14” enzyme of the Delta strain failed to complete this work. Contrary to the team’s expectations, there is a lack of genetic diversity, and many samples have many genetic changes at a site called A394V, which is related to this error-correcting enzyme.

Inoue said, “When we saw these discoveries, we were stunned. The Delta variant in Japan is highly disseminated and “is” blocking other variants, but as mutations accumulate, we think it will eventually become A problematic virus that cannot complete self-replication.

According to the report, even if the theory of natural extinction is confirmed, it is at best a temporary “reprieve” for the epidemic in Japan. Inoue Yilang believes that although quarantine measures and entry controls may delay the emergence of new variants in Japan, new and more successful strains may still enter Japan.

New hope for ending the global pandemic of the COVID-19?

Is the self-destruction of the new coronavirus a new hope for the end of this global pandemic?

Dr. Zhu Huachen, an associate professor at the School of Public Health of the University of Hong Kong, said in an interview, “There are multiple variants circulating at the same time in the world, and it is not surprising that individual strains that weaken themselves. Viruses may become weaker or may become weaker during mutation.  The key depends on the growth and decline of these variants and the intervention measures of the population. It should not be taken lightly just because a weakened strain appears in a certain place.

“Even if the mutation of nsp14 really occurs in Japan, it really weakens the virus, and even if such a virus disappears, it does not mean that the virus in Japan will not continue to develop. If prevention and control are not done well, the country will If it is not held, the vacated ecological position may be replaced by other pathogens, and another possibility is that the mutant strain of nsp14 will continue to change forward. So we still have to continue to monitor and protect the virus. , We must pay close attention to what its changing direction is and what its risks are. If prevention and control measures are not strengthened, the Japanese epidemic will continue to repeat in the future.” Zhu Huachen said.

According to Japanese media reports, Japan is preparing for a new wave of epidemics this winter and is preparing to “coexist with the virus.” According to reports, the Japanese government plans to relax travel restrictions and increase the number of people allowed to enter each day from 3,500 to 5,000.