Syphilis is easy to treat, but the symptoms may disappear before the patient realizes that they are infected, or they may not have appeared at all.

However, if not detected and treated in time, syphilis can also cause serious long-term health problems, including organ damage and even death.

Pregnant women who contract syphilis during pregnancy can transmit it to the fetus through the placenta, causing intrauterine infection in the fetus, leading to congenital syphilis.

This is the second leading cause of stillbirth in the world, and it may also have serious developmental consequences for full-term newborns.

Even pregnant women with asymptomatic recessive syphilis are still contagious. Syphilis can be prevented through early screening and treatment during pregnancy.

The incidence of syphilis declined in the 1980s and 1990s, partly due to the beginning of the HIV epidemic, and many countries have done a lot of scientific publicity on safe sex.

However, since the beginning of the 21st century, the incidence of syphilis has risen sharply, with a surge of more than 300% in some countries.

According to data from the Chinese Center for Disease Control and Prevention, there will be 464,435 new cases of syphilis in some countries in 2020.

Recently, in a new study published in “Nature Microbiology” , a large international research team led by the London School of Hygiene and Tropical Medicine School of Infectious and Tropical Diseases, the British Health and Safety Agency and the Wellcome Sanger Institute passed all Genome sequencing maps the recent recurrence of syphilis worldwide.

The study provides important insights into the genetic diversity of Treponema pallidum and has implications for vaccine design and antimicrobial resistance. 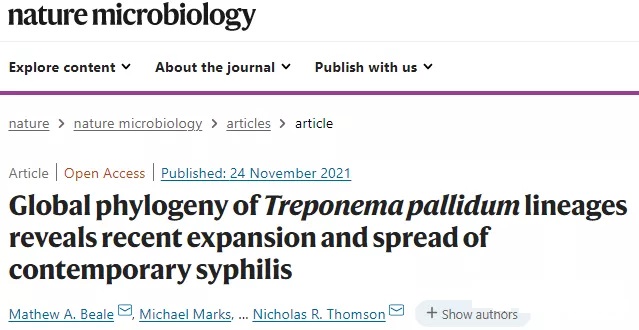 Historically, it is generally believed that syphilis caused a large-scale epidemic during the European Renaissance, but it did not exist or was not recognized before.

Although the exact age of the origin of syphilis and its subspecies’ common ancestor is still the subject of controversy, there is a view that the persistence of syphilis in modern populations can be traced back to a pathogen that was introduced to Western Europe about 500 years ago and then spread globally.

In this multi-center collaborative study, the research team used direct whole-genome sequencing (WGS) to conduct syphilis patients from 23 countries/regions in Africa, Asia, the Caribbean, South America, and Australia from 1951 to 2019.

Sampling to form a global perspective on contemporary syphilis. Their data set also includes detailed analysis of “domestic” variations in the Treponema pallidum genome in North America and Europe.

Since DNA changes occur over time at a known and predictable rate, the ancestral relationship between different sequences can be determined.

The team found that all samples came from two deep branch lineages, namely SS14 and Nichol s . These two lineages are currently spreading in 12 of the 23 countries sampled, and 14 of them have almost the same pathogen. 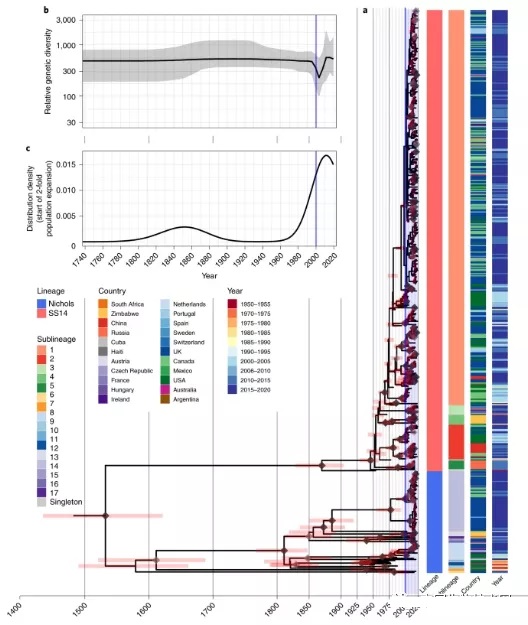 This means that Treponema pallidum is genetically homogeneous. Modern syphilis is a truly global disease, with a common pedigree and subspecies.

The lead author of the study, Dr. Mathew Beale of the Wellcome Sanger Institute, said: “ The main Treponema syphilis lineages of patients infected before 1983 are different from those of infected patients today.

The results of our analysis are worrying because many countries have almost The same subspecies, this shows that syphilis is back, and it is global. It is spreading regularly in the world . “ 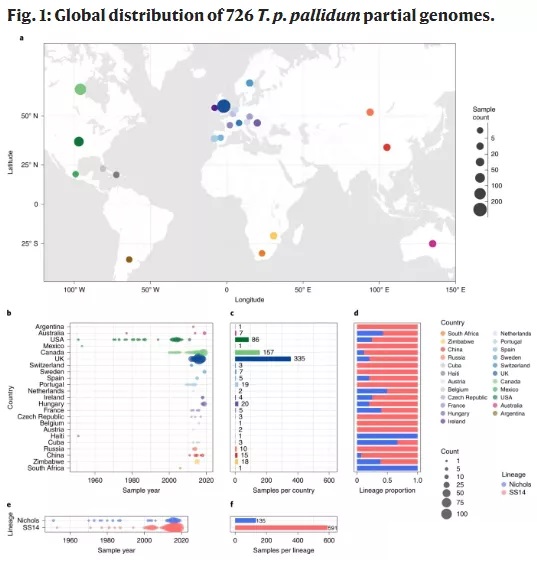 Since 2010, syphilis cases in some countries have surged by more than 300%, and the impact of syphilis on men who have sex with men (MSM) is particularly prominent .

The corresponding author of the study, Dr. Helen Fifer of the UK Health and Security Agency, said: ” The surge in syphilis cases in recent decades is very worrying.

This is a sexually transmitted infection that is not easily detected. In recent years, among men who have sex with men A large proportion of cases are diagnosed during the incubation period.

Due to the risk of congenital syphilis, the increase in syphilis among heterosexuals is also worrying.

Anyone who has sex with a new or temporary partner should use condoms and be tested. , Because sexually transmitted infections can have serious consequences for the health of individuals and their current or future sexual partners. “

The researchers said that because the samples used are residual samples available in regional or national archives, there are problems of uneven coverage and insufficient sampling, so it is impossible to infer the spread of syphilis between countries.

But they emphasized that despite these limitations, the data still shows that patients infected with Treponema pallidum are different from those 30 years ago, and the ancestral subspecies may have been extinct and replaced by new subspecies.

With the sharp rise in syphilis cases in the United States, the United Kingdom, and other Western European countries, these subspecies have swept the world.

In summary, this study further emphasizes the importance of sexual behavior in the communication dynamics.

Researchers believe that it will be meaningful to incorporate epidemiological evidence of sexual transmission into a specially designed cohort study to further explore this issue.