Science Advances: Psilocybin can reduce the recurrence of alcohol dependence

Science Advances: Psilocybin can reduce the recurrence of alcohol dependence.

Alcohol dependence is one of the most common neuropsychiatric diseases. In Germany, more than 5 million people are affected.

The consequences are often severe physical and mental suffering and high mortality.

The average life expectancy of those affected has been reduced by more than 22 years.

Although the disease is serious and its chronic course is characterized by frequent relapses as excessive drinking, which brings great pain and pressure to patients, scientists still know little about the causal mechanism in the brain.

In a new study, researchers from the University of Heidelberg in Germany and the University of Picardy Jules-Verne in France found that as a psychedelic drug derived from mushrooms, psilocybin has the potential to restore the brain Affected molecular circuits, thereby helping to reduce the recurrence of alcohol dependence.

This may lead to new treatments. Related research results were recently published in the journal Science Advances, with the title of the paper ” Psilocybin targets a common molecular mechanism for cognitive impairment and increased craving in alcoholism “.

The mental processes that control behavior, attention, and emotions are called executive functions.

In many mental illnesses and addictions such as attention deficit hyperactivity disorder (ADHD), autism, schizophrenia, and borderline syndrome, the ability to control one’s thoughts and actions and regulate emotions is disturbed. 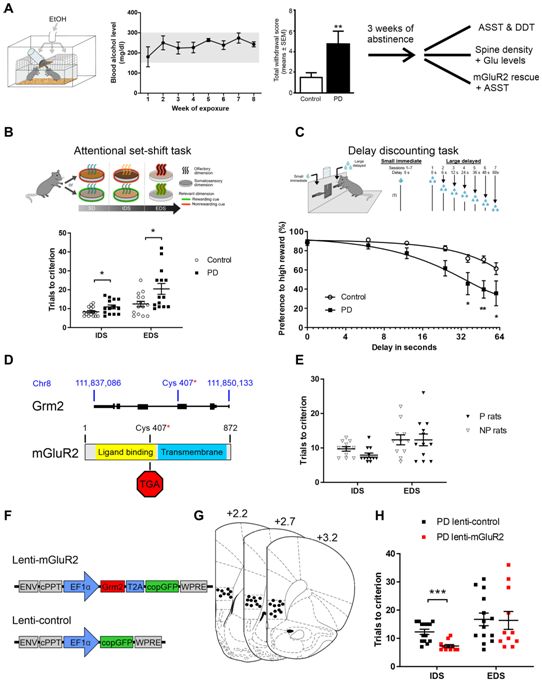 The lack of mGluR2 in the submarginal zone induced by alcohol can lead to impaired performance in the attention shift test. Picture from Science Advances, 2021, doi:10.1126/sciadv.abh2399.

In this new study, the authors investigated the molecular mechanisms underlying changes in executive function and increased recurrence of alcohol dependence.

Their research focuses on the role of metabotropic glutamate receptor 2 (mGluR2). In the brain, this receptor acts as an antenna for the neurotransmitter glutamate and regulates its release in various brain regions.

In this paper, they found that in rodent models of alcohol dependence, there is a causal relationship between the decline in mGluR2 function in the prefrontal cortex of their brain regions and impaired executive control and craving for alcohol.

Therefore, mGluR2 activation is considered to have the potential to treat alcohol dependence.

Psychedelics such as psilocybin and lysergic acid diethylamide (LSD) act on the serotonin 2A receptor (5-HT2AR) in the brain.

These receptors are abundant in the prefrontal cortex. Previous studies have shown that 5-HT2AR and mGluR2 can form a functional complex.

This complex is related to the mechanism of action of psilocybin, but the molecular function of this complex in addiction was previously unknown.

The first author and co-corresponding author of the paper, Dr. Marcus Meinhardt of Heidelberg University, said, “ We were able to find that psilocybin can restore the level of mGluR2, which leads to a decline in the relapse of alcohol dependence.

Therefore, this research is development. A new type of treatment using psilocybin to promote the activity of mGluR2 offers the possibility. ”

Science Advances: Psilocybin can reduce the recurrence of alcohol dependence