So far, the clinical application of CAR T cells is mainly limited to CD19-expressing B-cell malignancies; however, ongoing research is testing its application in other hematological malignancies, such as Hodgkin and non-Hodgkin’s lymphoma, Multiple myeloma and acute myeloid leukemia.

The US Food and Drug Administration has approved autologous CD19 CAR T cell products for the treatment of acute lymphoblastic leukemia and certain types of relapsed or refractory large B-cell lymphomas.

(I) It is logically troublesome to generate autologous products from patients;

(iii) It may not be feasible to generate clinically relevant doses of CAR T cells from a large number of pretreated lymphopenia patients. Another method is to use T cells previously collected from allogeneic sources; however, even with HLA matching, T cells can cause severe graft-versus-host disease (GVHD).

Contrary to the popularity of CAR T cells, although NK cells have multiple advantages, the production and clinical application of CAR natural killer (NK) cells have been lagging behind due to various reasons. Here, we describe these obstacles and discuss strategies to overcome them.

Among cytolytic lymphocytes, NK cells represent the most effective anti-tumor effector of each cell, have a unique mechanism of action (Figure 1), and provide an attractive cell source for cancer immunotherapy.

On the other hand, tumor or virus-infected cells usually down-regulate or lose their HLA molecules as an escape mechanism against T cells. Due to the loss of the inhibitory signal, the loss of HLA class I expression makes them susceptible to lysis by NK cells.

In fact, the clinical significance of NK cell allogeneic reaction has been confirmed in a number of studies in the setting of hematopoietic stem cell transplantation (HSCT), in which patients receiving transplants containing allogeneic NK cells have a significantly reduced risk of recurrence , The survival rate is improved.

The adoptive transfer of alloreactive NK cells as an independent therapy (independent of HSCT) has also shown encouraging results in various malignant tumors. 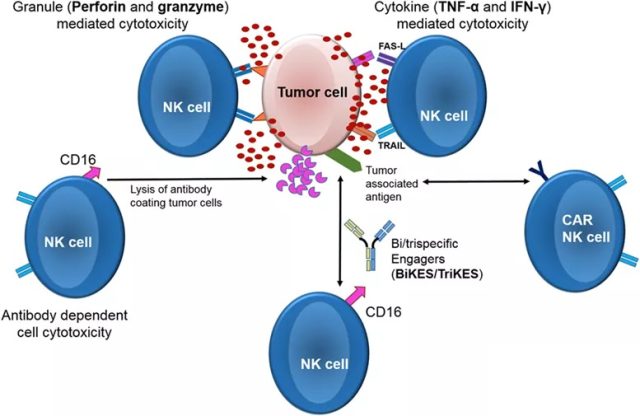 Therefore, for a variety of reasons, NK cells provide an attractive alternative to T cells for CAR engineering:

(i) Allogeneic NK cells should not cause GVHD, as predicted by observations in mouse models, as well as haploid and umbilical cord blood (CB)-derived NK cell transfusions in clinical studies of hematology or solid malignant tumors. Note the effect;

By selecting donors based on donor-acceptor KIR ligand mismatch or donor haplotype B KIR gene content, this unique characteristic of NK cells can be further utilized to produce NK-CAR, because both have been proven to be correct Settings for allogeneic HSCT. Therefore, compared with the current lack of CAR T cell products in many centers, allogeneic NK cells provide the potential for ready-made cell products for immunotherapy and can be easily used immediately for clinical use.

We have shown that CAR engineering may not be easy to overcome this.

Obtaining NK cells from PB through apheresis or harvesting from BM is both troublesome and related to the potential risks of healthy donors. Deriving NK cells from hESC or iPSC is a complex process, and the field is still evolving.

In contrast, the NK cell line provides an easily accessible and homogeneous cell source for generating a large number of CAR-transduced NK cells, such as NK-92, KHYG-1, NKL, NKG and YT.

NK-92 is a highly cytotoxic NK cell line derived from NK lymphoma patients. It is characterized by CD56bright CD16neg/lowNKG2A positive and KIR negative (except KIR2DL4) .

Based on these data, people are very interested in CAR-engineered NK-92 cells for clinical use (Table 1).

However, NK-92 cells have many disadvantages that need to be considered. First of all, NK-92 cells are derived from NK lymphoma patients, so it is possible to implant the tumor after infusion.

In addition, they are EBV positive and carry a variety of cytogenetic abnormalities similar to NK lymphoma.

Therefore, as a safety measure, NK-92 cells must be irradiated before infusion into the patient to prevent permanent implantation.

This will have a negative impact on their proliferation and persistence in vivo. These two factors are critical to the success of cell therapy in the study of tumor infiltrating lymphocytes and CAR-T cells.

In fact, in a study of NK-92 cells modified with ErbB2/HER2-CAR, although radiation has no effect on the in vitro cytotoxicity of CAR-transduced NK92 cells, it has a negative effect on its replication and persistence in vivo.

Affected, the cells are no longer detectable within 7 days after adoptive infusion.

It is worth noting that NK-92 cells are CD16 (FCRIIIγ) negative and cannot mediate antibody-dependent cytotoxicity (ADCC) unless they are genetically modified to express CD16. 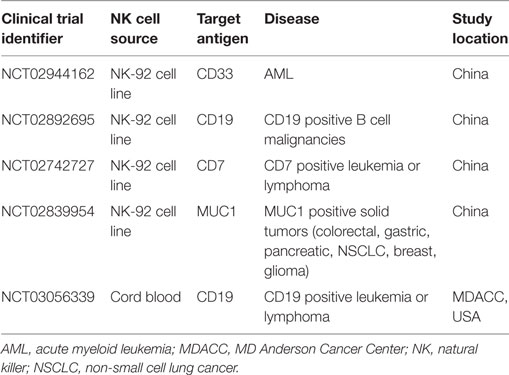 On the other hand, umbilical cord blood is a readily available source of allogeneic NK cells, which has obvious advantages over related or unrelated adult donors, including speed of acquisition and tolerable HLA mismatch, which expands the donor Library. The proportion of NK cells in CB (~15–20%) is similar to that of PB (~10-15%).

However, until recently, the small amount of blood in the CB unit made it challenging to obtain a sufficient number of NK cells for clinical use.

In addition, resting CB NK cells are immature in phenotype and function. The expression of inhibitory receptor NKG2A is higher, while the expression of activating and mature receptors such as NKp46, NKG2C, DNAM-1 and CD57 is lower.

There is a phase I clinical report that the use of GMP-grade K562-based artificial antigen presenting cells (aAPC) to express membrane-bound IL-21 and 4-1BB ligand can reliably produce clinically relevant doses of GMP-grade NK cells from the CB unit for adoptive immunity therapy.

After activation and expansion in vitro, CB-derived NK cells showed a complete array of activation and inhibitory receptors, and strongly expressed ectodermal protein (Eomes) and T-bet, which are two factors necessary for the maturation of NK cells.

It also exerts similar cytotoxicity to PB-NK cells. In summary, these studies support the use of NK cells as a source of cancer cell therapy.

In NK cells, CD3ζ homodimer transmits signals from FcγRIII (CD16), thereby contributing to ADCC. Although CD28 is one of the most commonly used costimulatory domains in CAR T cells, except in certain cell lines, its role in NK cell function remains unclear.

DNAX activating protein 12 (DAP12) is a transmembrane protein involved in the signal transduction of a variety of NK cell activation receptors, including NKG2C, NKp44 and activated KIR.

The author used PSCA-DAP12 CAR to transduce YTS-NK cells and primary NK cells, and noticed that it has better cytotoxicity than NK cells expressing CD3ζ-based CAR.

More research is needed to define the best costimulatory molecules and signaling domains for NK cells.

The incorporation of foreign genes into cells requires the use of vectors, which can be based on viral or non-viral systems. The most commonly used tools for CAR gene delivery include genetically engineered retroviruses [lentivirus and γ-retroviral vectors].

In addition, compared with retroviral vectors, lentiviral vectors can accommodate larger transgenes. Although insertional mutagenesis is extremely rare, it is still a problem with viral vectors, although its possibility is affected by many factors, such as the specific type of vector used and the site of integration.

However, in order to alleviate any theoretical concerns, various non-viral technologies have also been tested, such as the transposon/transposase system or mRNA transfection.

The efficiency of transduction using these techniques varies from study to study and depends on many factors, including the source of the cell.

In general, the transduction efficiency of CAR T cells is about 50%, but it can reach 90% or higher.

Although NK cells have many advantages, there are still some obstacles to successfully generating CAR NK cells for clinical use.

Until recently, genetic engineering of NK cells proved to be challenging even using viral methods, with reports that the transduction efficiency of primary CB or PB-derived NK cells was less than 10%.

However, the recent optimization of viral transduction and electroporation protocols has rekindled the enthusiasm for genetic engineering of NK cells.

Although viral methods seem to be basically ineffective in inducing CAR expression in freshly isolated PB NK cells, when NK cells from PB (12-73%) or CB are activated and expanded (median 69%), Significantly better transduction efficiency can be achieved.

However, because mRNA transcripts are not integrated into the genome, the expression of CAR molecules is usually short-lived and can only be detected within a few days, which may negatively affect the efficacy of engineered cells after adoptive transfer.

Another problem with the use of allogeneic NK cells is the possibility of injecting contaminating T or B cells into the expanded NK cell product, which theoretically can lead to GVHD or post-transplant lymphoproliferative disease, respectively.

Since a certain degree of HLA mismatch after CB transplantation is well tolerated, compared with PB, CB-derived CAR-NK cells may have a lower risk of clinically significant GVHD.

In addition, apart from a study that reported GVHD after adoptive transfer of IL-15/4-1BBL-activated NK cells activated by donor-derived IL-15/4-1BBL in HLA-matched, T-cell depleted PB HSCT recipients, hundreds of haploidentical clinical studies CB NK cell transfusion and CB NK cell transfusion in patients with hematological and solid malignancies have not reported a higher risk of GVHD.

In contrast, experimental evidence obtained in mice shows that NK cells reduce the risk of GVHD through a variety of mechanisms, including depletion of host antigen-presenting cells and activated alloreactive T cells.

Another potential limitation of NK cells for immunotherapy is that, compared with T cells, they are highly sensitive to the freezing and thawing process and lose activity after thawing.

Many groups are exploring strategies for optimal cryopreservation of NK cells, and have shown that the activity of frozen NK cells can be restored by incubating with cytokines such as IL-2 overnight.

Another characteristic of NKs is that they do not persist after adoptive transfer without cytokine support.

Although the shorter lifespan of NK cells may be beneficial, allowing anti-tumor activity while reducing the likelihood of long-term adverse events, such as long-term cytopenias caused by targeted/non-tumor toxicity to normal tissues, it may also limit them The effect of.

In order to survive and proliferate in the body, NK cells need continuous cytokine support, otherwise they can only be detected in the circulation for 1-2 weeks.

The two most commonly used cytokines that support the persistence of adoptively transferred NK cells are IL-2 and IL-15.

The infusion of IL-2 has serious side effects, including fever, chills, myalgia, and capillary leak syndrome, and can promote the expansion of regulatory T cells (Treg) that inhibit NK cells.

On the other hand, IL-15 does not support Treg expansion, but when administered as an exogenous pill to patients with metastatic melanoma and kidney cancer, it can cause dose-dependent toxicity, including neutropenia. Another way

to administer cytokines exogenously is to treat patients with lymph-depleting chemotherapy such as cyclophosphamide and fludarabine before infusion of NK cells, which expands NK cells by depleting mature lymphocytes (depleting IL-15) The increase provides a favorable environment, leading to a significant increase in endogenous IL-15 levels.

Another new technology is to integrate IL-2 or IL-15 genes into CAR constructs to continuously provide cytokine support for CAR-transduced cells.

We recently demonstrated the feasibility and effectiveness of this method in a mouse model of Raji lymphoma.

We are in an exciting era in the field of cell therapy.

NK cells have broad prospects and provide potential for ready-made cell products for immunotherapy, which can be used for immediate clinical use at any time.

However, before NK cells can expand to a larger patient population, many scientific issues and regulatory obstacles must be resolved.