The Omicron strain may be the fastest-spreading virus in human history, but it still doesn’t seem content.

At present, its sub-variant BA.2 is also gradually replacing the previously popular Omicron BA.1. Compared with Omicron in the earliest public perception, the academic community estimates that the transmission power of the new sub-variant has increased by about 30%.

“If the Delta strain is the brute-force Hulk, then Omicron is the Flash, veiled and speeding,” said Scientific American in an explanatory report on the Omicron strain on Feb. 11.

The article analyzes Omicron’s “surprising anatomy.” Wendy Barclay, a virologist at Imperial College London, said: “I don’t believe it’s going to end here, and as the new coronavirus continues to spread around the world, it will come up with more ways to spread — including ones that humans haven’t even thought of yet.

Like criminals escaping the pursuit of the police, the virus also seems to be born with “wisdom”. In the experience and lessons, it constantly tries to change the way of “committing crimes” and “running away” to resist the encirclement and suppression of human beings.

Citing the latest report of “Scientific American” Omicron’s Surprising Anatomy Explains Why It Is Wildly Contagious , “more camouflage”, “more stable”, “new invasion method” and “lower toxicity” are the most notable features of Omicron, which also make its Rapidly replaced Delta as the dominant strain:

The current academic consensus is that Omicron’s ability to evade the human immune system is unparalleled among all variants of the new coronavirus.

The 2019-nCoV spike receptor binding domain (RBD) binds to the human ACE2 receptor. To fight infection, the body’s immune system produces antibodies that recognize the virus’s RBD and prevent it from binding to human ACE2.

But the virus is very “smart” and will change the “vest”. In previous variants, individual amino acids on the new coronavirus RBD were mutated and “changed” to avoid recognition by some antibodies. For example, Delta has three RBD mutations.

But Omicron contains as many as 15 RBD mutations, many of which are located at the primary antibody-binding site, equivalent to going from a “vest” to a “disguise”. In an analysis published Jan. 25 in the journal Science, scientists showed the results of this dramatic shift: Of the eight COVID-19 antibody treatments currently in use, only one (based on natural antibodies) still binds to On Omicron’s RBD.

Other studies have shown that mutations in the RBD allow Omicron to evade tracking, whether it’s vaccination or antibodies acquired from infection.

When Omicron drastically changed the “look” of the spike protein, it was not easily recognizable, but it also lost some amino acid residues that were important for binding, preventing it from binding to human cells.

It makes up for it with other mutational approaches, and according to a recent study in the journal Science, Omicron’s RBDs form new “chemical bridges” that help bind proteins efficiently. The “chemical bridge” makes Omicron’s spike protein stronger, and its subunits can bind more tightly, preventing the spike protein from dividing before it invades human cells.

“The virus knows how to make changes happen at the right time and in the right place to trigger and enter the cell, not before,” the researchers said.

Among the many variants of the new coronavirus in the past, one feature remains unchanged, that is, the virus relies on a protein called TMPRSS2 on the surface of human cells to help it break through the human cell membrane.

But instead of using TMPRSS2, Omicron takes a completely different route into cells. After binding to ACE2, it wraps itself in the vesicle structure of the cell membrane, the vesicle drifts into the cell, and the virus then explodes and begins to take over the cell.

In layman’s terms, “the virus did not open the door and break in this time, but chose to climb into the window.” 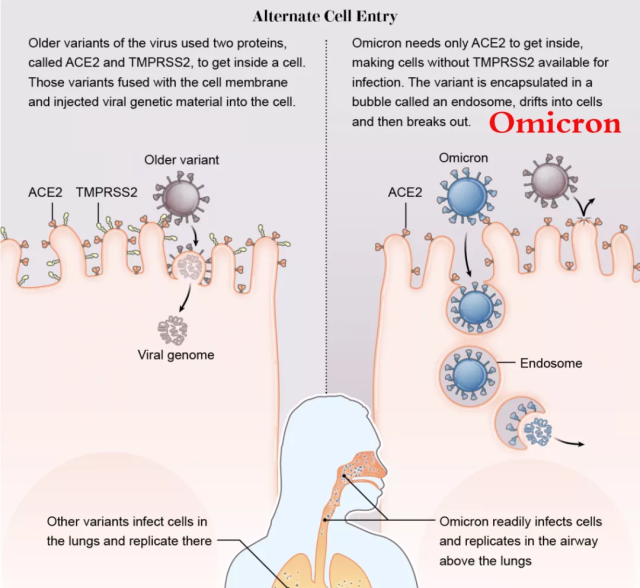 For one, many cells do not have TMPRSS2, and “without dependence on it, there may be seven or even 10 times more cells that the virus can infect,” Wendy Barclay said.

Second, compared to the Delta variant, which frequently infects TMPRSS2-rich lung cells, Omicron replicates rapidly in the respiratory tract, coughing, sneezing…it makes it easier to spread itself from person to person.

The scientists examined the responses of Omicron and Delta to interferon. Interferons are like flares, alerting the immune system to intruders, and Delta is good at suppressing interferons—but Omicron activates it instead.

Scientists still don’t know the mechanism of this change, but the predictable results are:

The interferon response is more pronounced in the lungs than in the upper respiratory tract, and this feature of Omicron may prevent it from spreading to deeper organs, such as the lungs, preventing serious disease.

From the perspective of virus evolution, after obtaining high transmission power, it reduces the mortality of the host by sacrificing toxicity, so as to better reproduce in the human body.

Will Omicron be the last new coronavirus?

Is it possible for viruses to continue to mutate and evolve? In what direction will it go?

Let’s focus first on one of the newest threats: BA.2. First discovered in India and South Africa in late December 2021, it is a sub-variant of Omicron, believed to arise from the Omicron BA.1 mutation, which differs by about 20 mutations.

According to the latest issue of the UK Health Security Agency, there is evidence that BA.2 infections have continued to grow in more than one country compared to the earliest identified Omicron BA.1.

A preliminary study in Denmark showed that BA.2 infections in the country have largely replaced BA.1, and BA.2 tripled the susceptibility to infection in unvaccinated people compared to BA.1 many.

The good news is that there isn’t any evidence yet that BA.2 is more toxic.

The Virology expert mentioned that BA.2 has reached a “ceiling” of virus evolution, and stronger dominant strains are unlikely to appear in the short term. But in the long run, it is likely not to be the last variant.

Professor Jin Dongyan, a professor at the Hong Kong School of Biomedical , analyzed that the optimistic trend is that in order to better coexist with humans, no matter how the new coronavirus mutates in the future, the virulence will always tend to weaken or be similar.

“Is it possible that the transmission and virulence will increase at the same time? Yes, but this is a small probability event.” Professor Jin Dongyan said to the “medical community”, “Be vigilant, but you do not need to pay too much attention to low probability events with limited resources. “

There is no mutation without replication. For countries and regions that have not fully established immune barriers, physical prevention and control is still one of the most effective means of epidemic prevention.

In a new paper released by the Li Ka Shing Faculty of Medicine at the University of Hong Kong, researchers say strict control measures can eliminate most chains of transmission, whereas past community outbreaks in Hong Kong tended to occur during periods of less stringent epidemic prevention.

In Europe, despite the decline in the number of confirmed cases and the establishment of immune barriers, many countries have successively announced the lifting of relevant epidemic prevention measures, but there are still experts who are conservative or opposed.

In the above-mentioned paper, the Faculty of Medicine of the University of Hong Kong stated that countries adopting “suppression” or “mitigation” epidemic prevention strategies during the outbreak often have multiple new lineages dynamically co-spreading, and our research shows that Hong Kong, which adopts the “elimination” strategy, has the third Only two lineages constituted the major virus populations during the first and fourth waves.

“Thinking that Omicron is the last mutant strain, or that we have entered the final stage of the epidemic, are very dangerous ideas,” said Tedros Adhanom Ghebreyesus, director-general of the World Health Organization. “Instead, the conditions are ripe for more mutants to emerge globally.”

Last month, The Lancet mentioned in its blockbuster prediction article that March this year will mark the end of the COVID-19 global pandemic. But with the current number of global infections still at a high level, the expert believes that the global pandemic will not end so soon, and at least we have to wait until August to see the situation before drawing a conclusion.