What is the impact of “synaptic loss”? For 30 years, scientists have believed that synapse loss (the loss of connections between brain cells) is a major pathological factor in cognitive impairment in Alzheimer’s disease (AD).

But for this claim, the actual evidence that scientists can provide is very limited – because the research subjects are very small and generally carried out in some patients with moderate to severe disease; Autopsy, or a small biopsy based on a limited area of ​​brain biopsy.

In response to these problems, researchers at Yale University in the United States independently developed an advanced imaging technology called “positron emission tomography” (PET), which enables researchers to observe living loss of synapses in the brains of AD patients – even if the patient’s symptoms are mild or only in the early stages of the disease.

With the help of PET scanning technology, on February 17, researchers at Yale University published an online article titled “Synaptic density and cognitive performance in Alzheimer’s disease: A PET imaging study with [11C]UCB-J”

In this study, they confirmed and successfully confirmed a previous claim that the root cause of cognitive deficits in AD patients is the destruction of brain synapses.

The substance used in the experiment, named [11C]UCB-J, is a SV2A PET tracer developed in recent years for human research.

A total of 64 subjects were included in the study following eligibility screening of candidates between the ages of 50 and 85.

Among them, 45 subjects had different degrees of AD, and 19 subjects were considered to be cognitively normal (CN) after measurement.

All subjects underwent SV2A PET imaging scans to measure synaptic density, which allowed the scientists to visually “see” synaptic metabolic activity in the brains of 45 patients diagnosed with mild to moderate AD.

As in the researchers’ previous analysis, in the AD group, synaptic density was significantly lower in both the brain regions affected by AD and in the hippocampus.

While synapse density was an important predictor of global cognition outcomes, the multiple linear regression model between the two was significant. 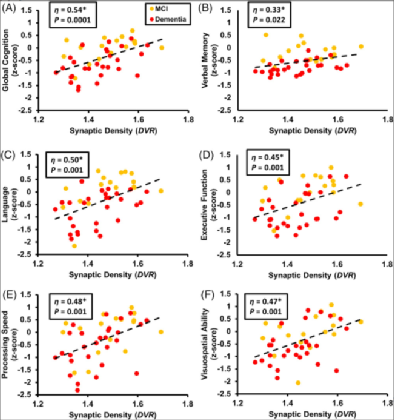 In further experiments, the researchers assessed the relationship between synaptic density and overall cognition across all brain regions.

The results showed that synaptic density was positively correlated with overall cognition in prefrontal, temporal, parietal and occipital cortical regions.

These brain regions were also observed by the researchers in previous scores on certain cognitive domains, including language skills, executive function, processing speed and visuospatial abilities.

In contrast, however, the link between synaptic density and verbal memory was more restricted in regions of the temporal, parietal, and occipital cortices.

Interestingly, however, there was no significant correlation between synaptic density in the hippocampus and entorhinal cortex and overall cognition or region-specific cognitive performance. 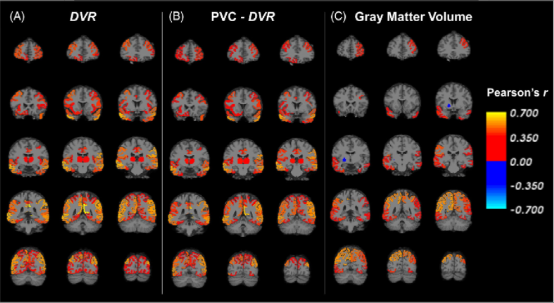 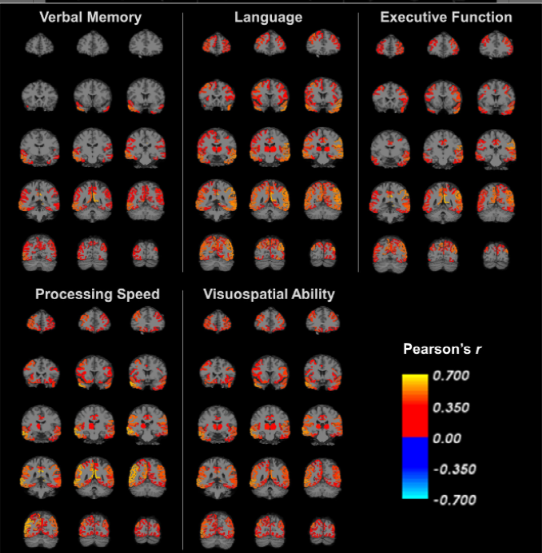 Taken together, loss of synapses, or connections, between brain cells is strongly associated with poor performance on cognitive tests .

In addition, the researchers noted that synapse density was a better predictor of a person’s cognitive performance than loss of gray matter volume in the brain, and that this correlation extended to mild and early stages of AD.

“Now, researchers can track patients’ progressive loss of synapses over time, which gives us a better understanding,” said Christopher van Dyck, director of the Yale Alzheimer’s Disease Research Center and senior author of the paper. The developmental process of cognitive decline in individuals.