Can Probiotics prevent Alzheimer’s disease as the regulator of brain function?

Can Probiotics prevent Alzheimer’s disease as the regulator of brain function?

Some people say that Alzheimer’s is the most vicious God’s curse. Because the cause of it is unknown, there is no medicine to treat the cause, which can only delay the course of the disease. Although a variety of methods for the treatment of AD have been studied before, none of them have shown the effect of improving the disease. This may be due to the poor timing of administration during the progression of AD.

Recent clinical studies have shown that two decades before the appearance of the clinical symptoms of AD, there were pathological changes characterized by β-amyloid (Aβ) plaques and fibrous tangles of hyperphosphorylated tau protein. Monoclonal antibodies that selectively target protein aggregation for early intervention have shown good therapeutic potential. This suggests that early diagnosis and intervention for AD and mild cognitive impairment (Mild cognitive impairment, MCI) relief is necessary, and has a positive meaning. 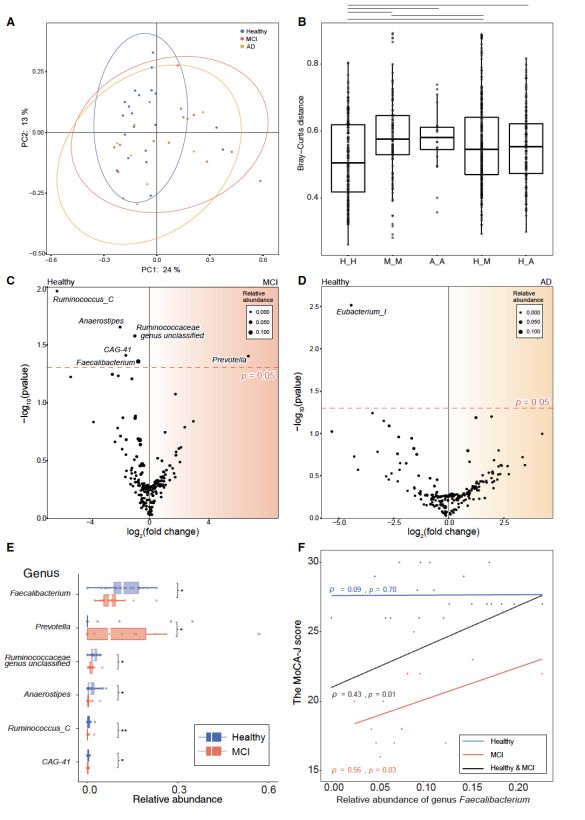 More and more studies have shown that the intestinal microbiota is one of the key regulators of intestinal brain function. The microbiota and the brain communicate with each other through various channels, including the immune system, the vagus nerve, and the enteric nervous system (that is, the microbiota-gut-brain axis system). Therefore, by exploring the relationship between the microbiota-gut-brain axis and finding a targeted microbiota that maintains brain health, it has become a promising disease intervention.

First, in order to determine the potential microbial populations to prevent MCI, the authors conducted a cross-sectional study. The author collected human fecal samples from the healthy group, the MCI group, and the AD group in Kusatsu, Gunma Prefecture, Japan. The composition of intestinal microbes was analyzed by 16S rRNA gene sequencing, and a total of 129 genera were detected. After that, the author used Bray-Curtis PCoA and permutation multivariate analysis of variance (PERMANOVA) to detect the composition profile of the overall genera.

Based on the comparative analysis of intestinal microbial composition, the author further selected and isolated the F. prausnitzii strain as the most promising candidate for the prevention of mild cognitive impairment .

In order to examine the causal relationship between F. prausnitzii and cognitive ability, the author used the isolated F. prausnitzii strain in an AD mouse model, and successfully identified two of the effective strains, Fp14 and Fp360.

The Aβ-injected mice were treated with Fp14 and Fp360 orally, and the results showed that live Fp360 can significantly improve Aβ-induced cognitive impairment in the Y maze test and passive avoidance test, but Fp360 after pasteurization has no such effect . Interestingly, in Fp14-treated mice, Fp14 after pasteurization can significantly improve Aβ-induced cognitive impairment.

After confirming that Fp14 and Fp360 are effective strains, the specific orthologs found only in these effective strains were determined by whole-genome comparison and metagenomic shotgun sequencing, and the healthy group was more abundant than the MCI group. In addition, metabolome and RNA sequencing (RNA-seq) analysis showed that there is a relationship between Fp14 and host oxidative stress and mitochondrial function in the brain.

Since one of the limitations of F. prausnitzii is its high sensitivity to oxygen, we further explored whether the inactivated Fp14 obtained after pasteurization has the effect of relieving cognitive impairment in the brain. Therefore, the author further analyzed the Fp14 after pasteurization, and performed metabolomics and RNA-seq analysis on the hippocampus obtained from behavioral animal experiments to explore the potential therapeutic mechanism.

Metabolome analysis detected 355 metabolites. Among them, Fp14 after pasteurization significantly reduces the content of thymine and N6-methyl-2′-deoxyadenosine, and suberic acid also tends to decrease. It has been reported that these metabolites are related to oxidative stress and mitochondrial function.

RNA-seq analysis also detected 15 differentially expressed transcripts. Among them, Fp14 after pasteurization significantly reduces the transcription level of the protein PACS-2, which is also reported to be related to mitochondrial function.