IDO (indoleamine 2,3-dioxygenase)once received warm attention due to its important role in tumor immunity, and it also greatly promoted the development of IDO inhibitors and the advancement of clinical trials, but IDO The clinical manifestations of inhibitors are far from expectations [1] .

For a long time, people’s research on IDO has mainly focused on its ability to consume tryptophan to exert immunosuppressive effects, but whether there are other mechanisms involved in the role of IDO in tumors is currently unclear.

They found that The metabolite of IDO, kynurenine, is transported into cells through SLC7A11 and inhibits tumor ferroptosis, thus revealing a new mechanism by which IDO promotes tumorigenesis and development .

Consistent with previous reports: when WT HeLa was co-cultured with CD8 T cells, IFNγ secreted by CD8 T cells induced the expression of IDO1 in HeLa, resulting in depletion of TRP (tryptophan) and two downstream metabolites KYN ( kynurenine (kynurenine ) and KYNA ( kynurenic acid) , but this phenomenon was not observed in IDO1-deficient cells.

Considering that KYN is secreted into the culture medium by tumor cells, the authors speculated: Could this metabolite and its derivatives regulate tumor cell proliferation and survival in an autocrine-paracrine manner and affect neighboring cells?

In addition, another downstream metabolite of TRP, indole-3-pyruvate, was recently reported to have strong anti-ferroptosis activity [2] . So do the metabolites downstream of IDO1 (KYN and KYNA) have similar cytoprotective effects?

Second, IDO leads to TRP deficiency in cells, activates the integrated stress pathway (ISR) in cells and initiates a series of cytoprotective programs, such as inducing the expression of CYS (cysteine) transporter SLC7A11, which in turn promotes GSH synthesis , inhibits ferroptosis.

Third, SLC7A11 can transport KYN into cells and then metabolize into 3HK and HAA to scavenge ROS. In this way, even tumor cells that do not express IDO can acquire the ability to resist ferroptosis in a paracrine manner.

Fourth, in a KYN-rich microenvironment, KYN competes with CYS for the SLC7A11 transporter, resulting in a CYS “pseudo-starvation” state, thereby upregulating SLC7A11 expression and promoting CYS uptake through the GCN2-ATF4 pathway.

Taken together, the research team’s work revealed a little-known link between IDO and cell survival: inhibition of cell ferroptosis through its downstream metabolite kynurenine, suggesting that IDO acts in an immunosuppressive-independent manner.

Promote the occurrence and development of tumors. At the same time, this discovery also provides a new idea for the clinical use of IDO: targeting the ferroptosis pathway may enhance the clinical therapeutic effect of IDO inhibitors. 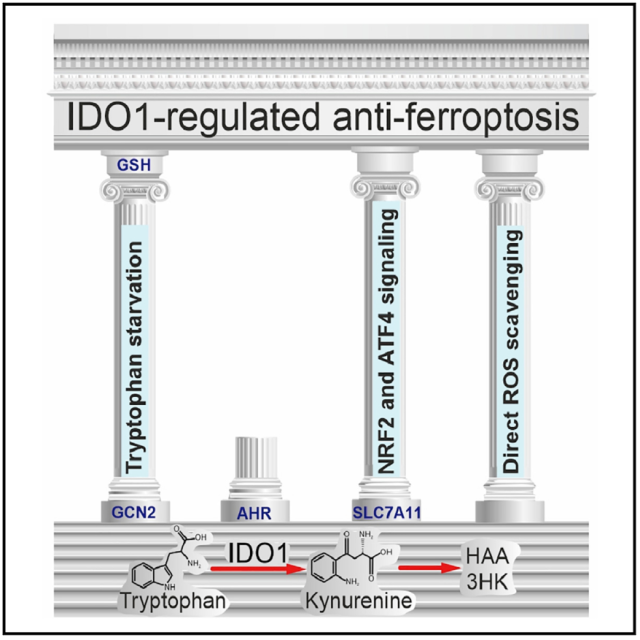