According to Reuters statistics, as of March 11 , the number of deaths from the COVID-19 in Asia exceeded the 1 million mark, accounting for about 16% of the cumulative global death toll .

The total population of Asia accounts for more than half of the global population, and the epidemic in this region has attracted much attention.

In fact, many Asian countries are experiencing the largest wave of infections since the outbreak of the virus due to the mutated strain of Omicron, and the number of new deaths in some countries is also on the rise, causing vigilance.

In other countries, the peak of the epidemic has passed, and epidemic prevention policies are being gradually adjusted.

In East Asia, Omicron is triggering a new wave of infection peaks, with newly confirmed cases and new deaths in South Korea, Japan and other countries setting new records. 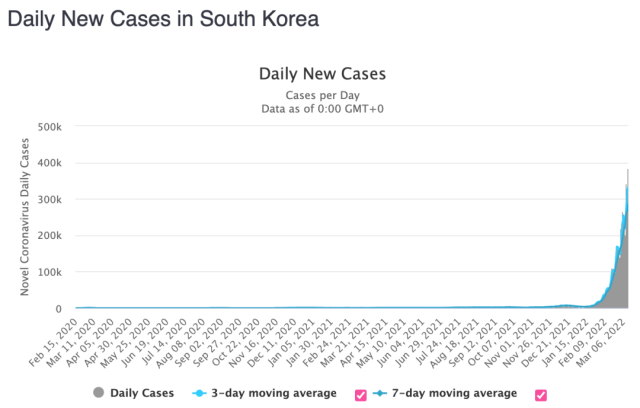 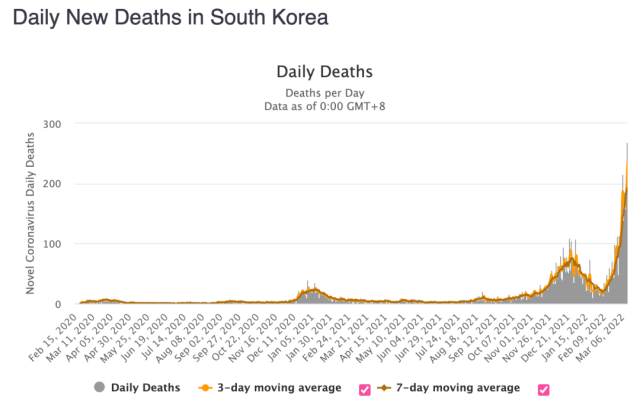 Yonhap News Agency reported that the mutant strain of Omicron is spreading in South Korea at an alarming rate, and the daily increase in confirmed cases continues to break records. On March 12 , the cumulative number of confirmed cases in South Korea exceeded 6 million, reaching more than 6.2 million, only 3 days have passed since the breakthrough of 5 million.

South Korean health officials said on the 11th that this wave of Omicron infections in South Korea is expected to peak in the next few weeks, when the average daily infection cases may surge to 370,000 . While the epidemic is spreading rapidly, severe cases of the COVID-19 in South Korea may surge in late March and early April . 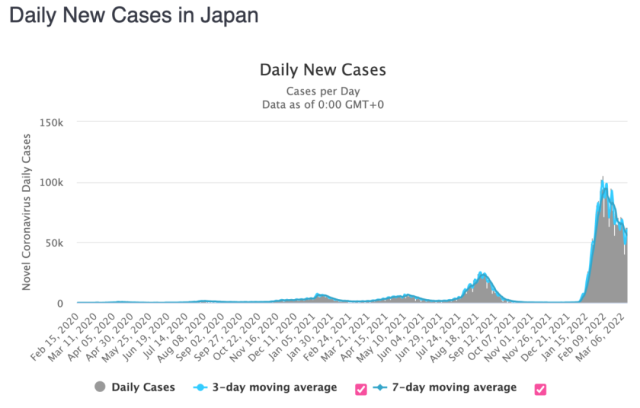 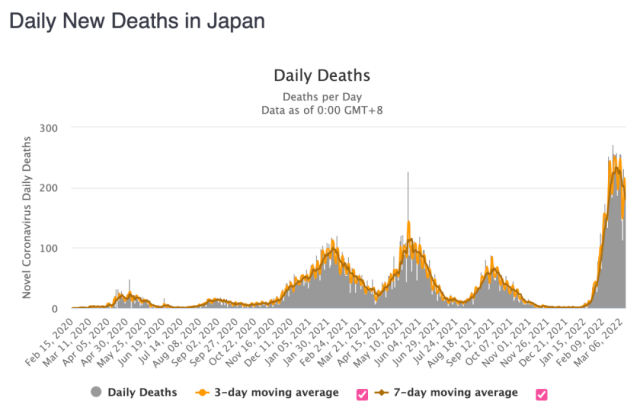 In China, according to the National Health Commission, from 0 to 24:00 on March 12 , 31 provinces (autonomous regions and municipalities) and the Xinjiang Production and Construction Corps reported 1,807 new local confirmed cases and 1,315 new local asymptomatic infections . No new deaths were reported.

As of 24:00 on March 12 , there were 7,230 confirmed cases in 31 provinces (autonomous regions and municipalities) and the Xinjiang Production and Construction Corps (including 6 severe cases ).

Southeast Asian countries still at the peak of COVID-19 pandemic, but began to open borders 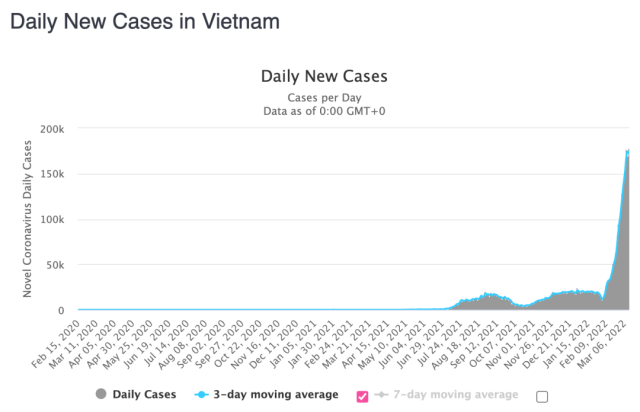 The Vietnamese government previously announced that Vietnam will reopen to international tourists on March 15 , local time. However, in the face of the still-spreading outbreak, what new rules will be imposed on those entering the country have yet to be determined. 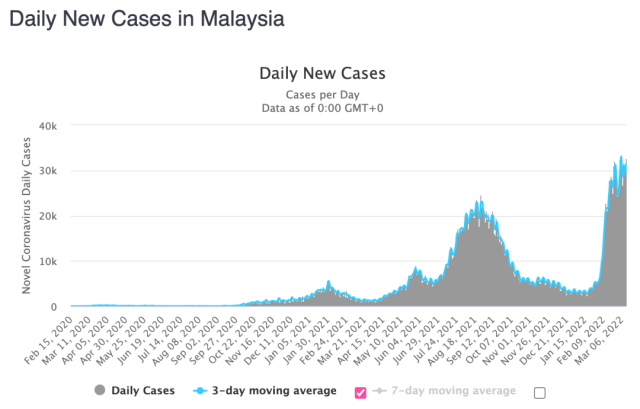 According to reports, Malaysia will open its borders on April 1 and move into the transition phase from the COVID-19 pneumonia epidemic to an endemic epidemic.

Since the outbreak of the COVID-19 epidemic, Thailand has experienced two waves of epidemic peaks, namely the Delta infection wave in August last year and the Omicron infection wave in February and March this year . On February 26 , Thailand recorded a record 25,615 new confirmed cases in a single day . 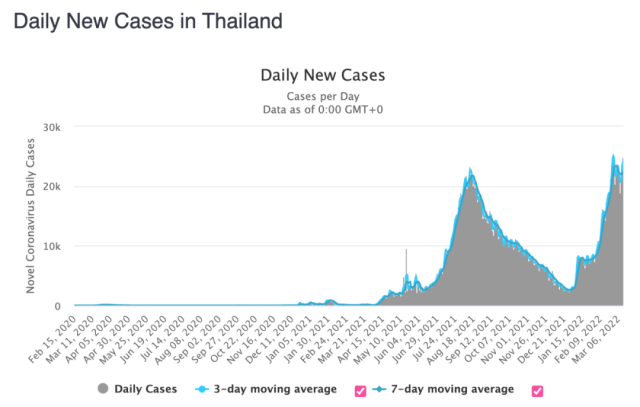 Thailand’s Deputy Prime Minister and Minister of Health Anutin said on March 9 that Thailand’s National Infectious Disease Commission has agreed in principle to consider the COVID-19 pneumonia as an endemic disease.

Singapore ushered in the peak of the epidemic in late February , when the number of daily confirmed cases exceeded 20,000 . Since March , the epidemic in Singapore has gradually eased, but the single-day increase is still at a high level. 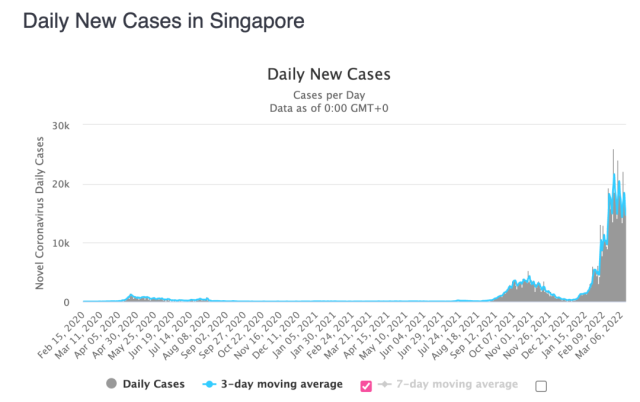 Singapore Parliament passed the COVID-19 Pneumonia (Temporary Measures) (Amendment) Bill on March 11 , extending the relevant control order for one year to April 2023 . Xu Baokun, Senior Minister of State for the Ministry of Health of Singapore, said that the epidemic is not over yet, and a new wave of epidemics and new mutant strains may still appear again.

India, Indonesia, Philippines have passed the peak of pandemic

After some Asian countries experienced a wave of infections in Omicron in January this year , the epidemic has gradually eased.

The number of confirmed cases in Indonesia is continuing to decline. In February this year, with the spread of the mutant strain of Omicron, the epidemic in Indonesia ushered in a peak. At that time, there were more than 60,000 confirmed cases per day . Indonesia’s outbreak has eased in recent weeks. On March 12 , the country reported 14,000 new confirmed cases . 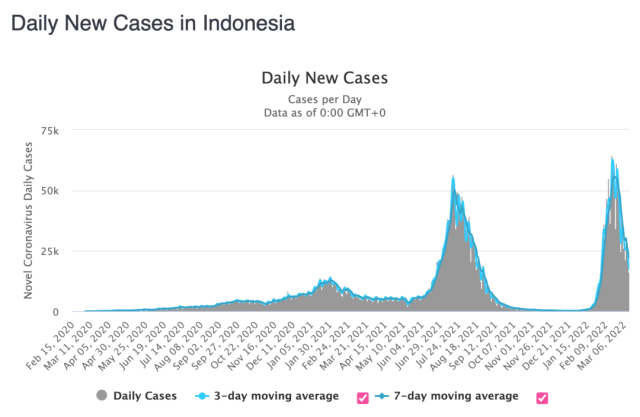 However, the “Jakarta Post” reported that although the number of newly confirmed cases in Indonesia has shown a downward trend, the daily increase in deaths is still at a high level, which is worrying. 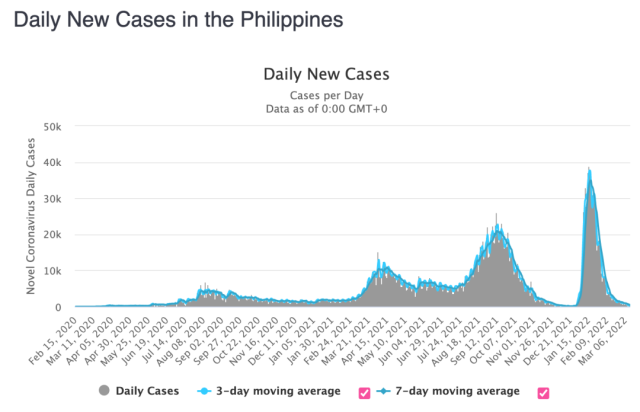 In South Asia, India, which ranks second in the world in terms of cumulative confirmed cases, has also eased the epidemic recently.

According to a report by the Times of India on the 13th , the country reported 3,116 new confirmed cases that day , the lowest number in the past two years. As of that day, India had reported a total of 42.99 million confirmed cases and 510,000 deaths – accounting for more than 50% of the cumulative deaths in Asia . 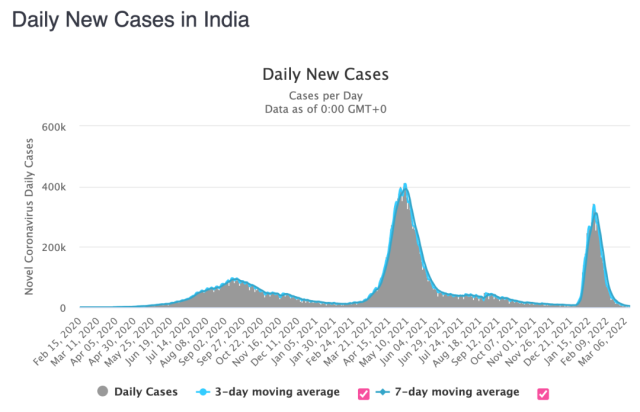 India ushered in the peak of Omicron infection in late January this year, when the average number of newly confirmed cases exceeded 300,000 in a week . However , since the end of February and the beginning of March, the daily increase in confirmed cases in the country has remained below 1,000 and has continued to decline.