Many people asked about the news that Moderna, a US mRNA vaccine company, had a patent for the novel coronavirus (SARS-CoV-2) in 2016.

This information first came from the famous British “Daily Mail” [1], not from the gossip tabloid “Daily Expose” [2] as reported in many media that criticized the news.

This makes us need to take a closer look at what is going on. 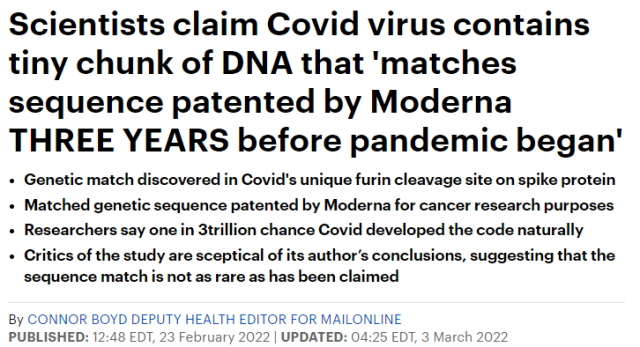 (The Daily Mail was the first to publish the information on February 23.) 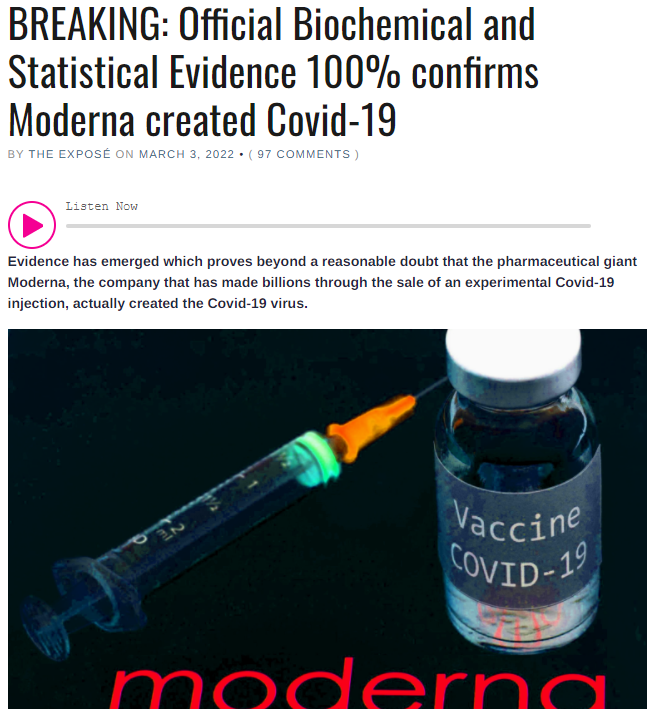 (On March 3, Daily Expose, a gossip tabloid, began to spread the news about the new coronavirus made in the United States. This article has also become the main source of many articles.)

First, let’s see what’s going on with Moderna’s patent: This patent has nothing to do with SARS-CoV-2.

The content of the patent is posted here. This patent is a patent that Moderna applied for a colorectal cancer-related gene MSH expression vector on February 4, 2016, and was approved on March 7, 2017.

Again, it has nothing to do with SARS-CoV-2. 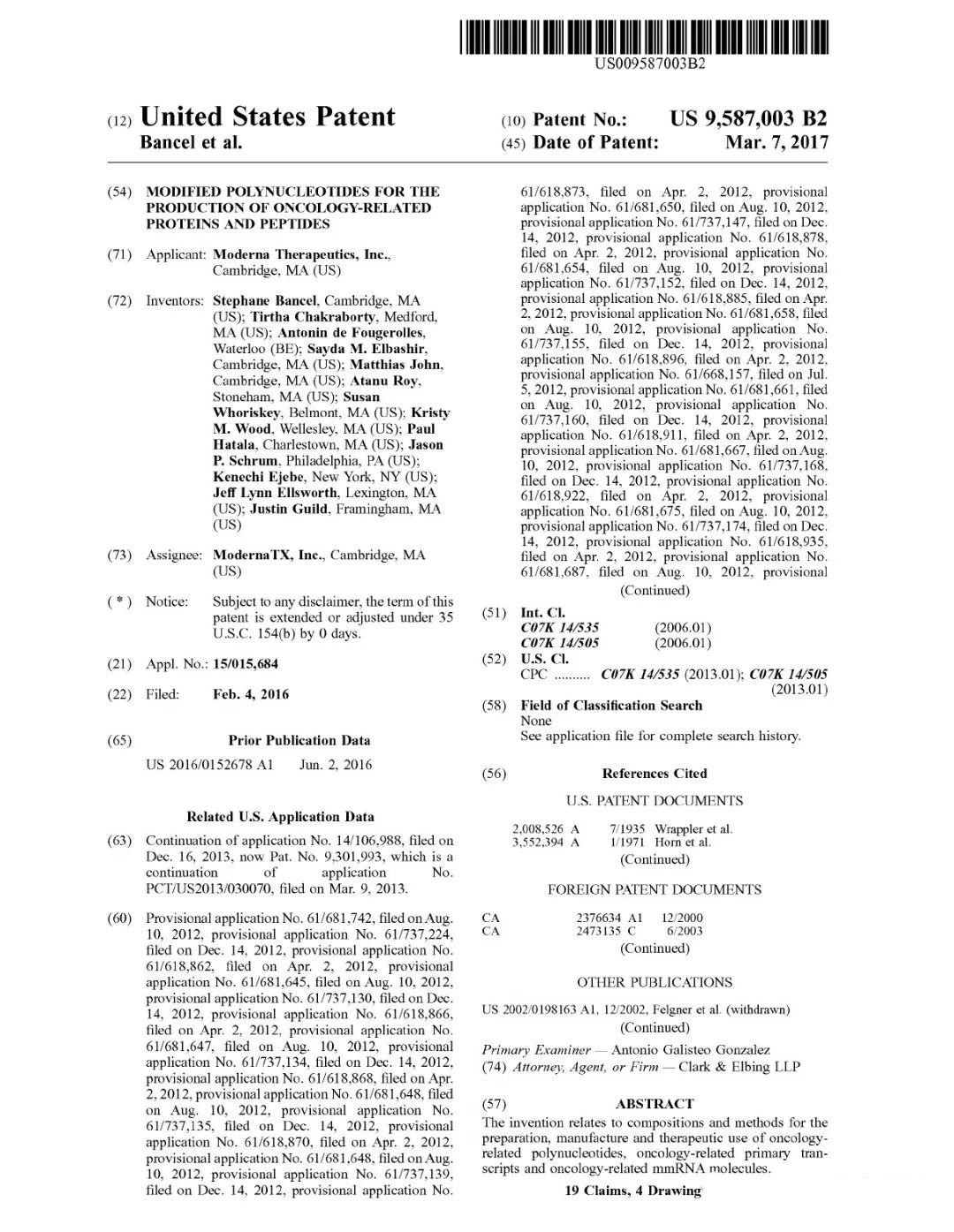 Second, let’s see what’s going on with the evidence provided by the Daily Mail.

On February 21, 2022, Balamurali Ambati from the University of Oregon, wrote a Perspective article in Frontiers in Virology. This is not a research paper, but a personal opinion.

He said that the mRNA expressed by MSH3 in MSH is anti-complementary to the sequence of the Furin cleavage site (FCS) of SARS-CoV-2.

Many conspiracy theories have emerged from this, linking MSH3 to the origin of SARS-CoV-2; it also became evidence pieced together by Daily Mail.

But this is not an anomaly. It is very common that mRNA expressed from human genomic DNA is complementary to the viral component.

In the past two years, many scientists in non-related fields have published some studies or wrote some opinions on bioRxiv or marginalized journals.

The earliest bioRXiv article from the Indian Institute of Technology suggested that the Furin cleavage site of SARS-CoV-2 was edited from HIV.

Then at the end of 2020, Rudolf Jaenisch, a Polish molecular biologist at the Whitehead Institute, uploaded an article on bioRxiv, titled that SARS-CoV-2 can be reverse transcribed and integrated into the human genome.

Bother articles were not officially received, but it set off a storm of public opinion on Twitter, followed by various conspiracy theories.

Third, the molecular origin based on virus sequence analysis plays a key role in tracing the origin

By the way, I have been tracking SARS-CoV-2 and other coronaviruses and commenting on their possible molecular origins on Weibo since early 2020, and this is now part of my job.

The researchers did sequence analysis, cloned the sequences of these Sarbecovirs discovered by the Shi group and constructed pseudoviruses.

Two studies published this year provide an important basis for elucidating the origin of SARS-CoV-2.

One is BANAL-20-52, the closest virus to SARS-CoV-2 found in Laos by French Pasteur, from which we at least know that RaTG13 reported by the Shi group is not the origin of SARS-CoV-2 [3].

On the other hand, the three most famous scientists in the world studying the origin of SARS-CoV-2, Edward Holmes, Andrew Rambaut, and Kristian Andersen jointly uploaded two research articles.

Through the methods of evolutionary tree analysis and lineage tracing, the research proved that SARS – Site of the earliest appearance of the two earliest lineages of CoV-2.

So from the above two important breakthroughs, we are one step closer to discovering the origin of the virus.

We know that SARS-CoV-2 originated from Sarbecovirus carried by bats, spread to an intermediate host, that is, a certain wild animal, and then spread across species and formed the earliest epidemic center.

But what has recently become increasingly curious is whether we still need to take the issue of the origin of the virus seriously, because no matter how the mainstream scientific community tries to shed light on the spread of this hype, and continues to produce a lot of key research data, this scientific knowledge is also difficult to understand. Effectively reach the masses; this is the most frustrating thing for academics.

How did Moderna respond?

Maria Bartiromo asks: We are all trying to understand how the new coronavirus started, and whether this actually came from a laboratory in ** . Let me ask you, this is how the Daily Mail reported that there is more evidence that the new coronavirus was synthesized in a laboratory. Now, scientists have found that the virus contains a small piece of DNA that matches Moderna’s patented sequence three years before the pandemic began. What is your attitude towards this? What can you tell us?

Stephane Bancel Answers: My scientists are looking at the data to see if they are accurate. The results weren’t so gloomy until speculation of an accidental lab leak became possible. You know, humans make mistakes. So is it possible that ** labs are working on viral enhancement or genetic modification and then someone accidentally gets infected in the lab and then infects family and friends. As you just mentioned, it is possible, and scientists need to analyze it to know whether it is true or false.

Maria Bartiromo Q: Yes, I mean, I was shocked by this report. It matches a gene sequence that Moderna has patented for cancer research purposes

Stephane Bancel: Yes, that’s why the team is looking at it very carefully to help us know if this is true. So it takes a little time to analyze all the gene sequences.

The existence of short, identical sequences in Moderna’s patented gene sequence and the new coronavirus itself does not prove that the virus came from a laboratory. This sequence can be found in other organisms, suggesting that it may have occurred naturally.

Scientists are still working to determine the origin of the new coronavirus.