Nature Metabolism: Food cravings during pregnancy are derived from dopamine secreted by the brain.

Although cravings for tasty food are a common feature of pregnancy and can lead to weight gain or even obesity, the neurobiological rationale remains unclear, in part because it is difficult to simulate this behavior in the laboratory.

On April 4, 2022, researchers from the University of Barcelona in Spain published a research paper entitled: Food craving-like episodes during pregnancy are mediated by accumbal dopaminergic circuits in Nature Metabolism.

This mouse study shows that food cravings during pregnancy are driven by dopamine signaling in the brain’s reward system . These preliminary findings also show that this eating behavior may have long-term metabolic effects on offspring, shedding new light on the neuronal basis of pregnancy-related food cravings.

The research team designed an experiment that allowed them to measure the type of food cravings in pregnant mice.

The authors reveal that pregnancy affects brain connectivity , particularly components of the dopamine circuit that is involved in the perception of rewarding stimuli and drives food-craving-like behaviors.

Pups of pregnant mice that were allowed to engage in food-craving-like behaviors were also affected, gaining weight compared to controls and were more prone to anxiety-like behaviors and eating disorders as adults.

The study found that male mice were more likely to behave similarly than female mice. 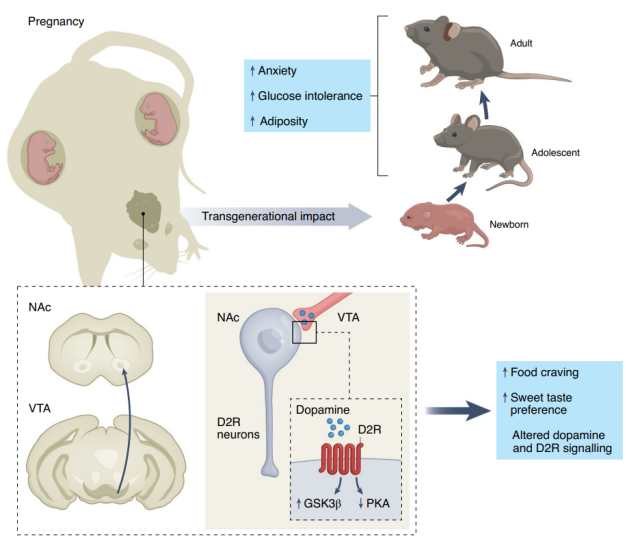