Aging is the gradual decline in an organism’s fitness that occurs over time, leading to tissue dysfunction and disease.

At the cellular level, aging is associated with decreased function, altered gene expression, and epigenome disturbances.

However, during iPSC reprogramming, somatic identity is lost and can be difficult to regain because redifferentiated iPSCs often resemble fetal rather than mature adult cells.

Using dermal fibroblasts from middle-aged donors, the study found that cells temporarily lost and then regained their fibroblast identity during MPTR, possibly due to epigenetic memory of enhancers and/or some fibroblasts Sustained expression of genes.

Excitingly, the study’s approach greatly restored multiple cellular properties, including the transcriptome , which was restored to about 30 years old, according to a new transcriptome clock measurement.

The epigenome, including H3K9me3 histone methylation levels and the DNA methylation senescence clock, was rejuvenated to a similar extent. In addition, MPTR fibroblasts produced youthful levels of collagen and showed partial functional recovery of their migration speed.

Finally, this work shows that more extensive reprogramming does not necessarily lead to greater rejuvenation, but rather that there is an optimal time window for rejuvenating the transcriptome and epigenome.

Overall, the study demonstrates that it is possible to separate rejuvenation from full pluripotency reprogramming, which will lead to the discovery of new antiaging genes and therapies.

Senescence is the gradual decline of cellular and tissue function over time in nearly all organisms and is associated with multiple molecular hallmarks such as telomere shortening, genetic instability, epigenetic and transcriptional changes, and the accumulation of misfolded proteins.

The progression of some aging-related changes, such as transcriptomic and epigenetic changes, can be measured with high accuracy, so they can be used to construct an “aging clock” that predicts chronological age in humans and other mammals with high precision.

Since transcriptomic and epigenetic changes are reversible, this raises the intriguing question of whether the molecular properties of aging can be reversed and cellular phenotypes restored. 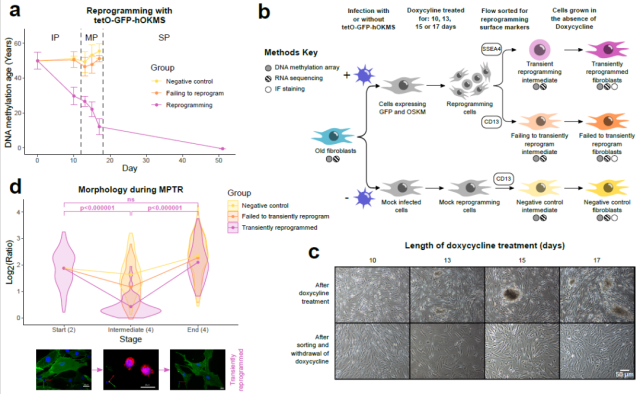 Induced pluripotent stem cell (iPSC) reprogramming is a process by which virtually any somatic cell can be transformed into an embryonic stem cell-like state.

However, iPSC reprogramming also results in the loss of primitive cell identity and thus loss of function.

In contrast, a transient reprogramming approach in which Yamanaka factors (Oct4, Sox2, Klf4, c-Myc) are expressed for a short period of time (~50 days) may enable regeneration without loss of cellular identity.

Reprogramming can be performed in vivo, and in fact periodic expression of Yamanaka factor in vivo extends lifespan and improves cellular function in wild-type mice.

Another approach to in vivo reprogramming also demonstrated reversal of age-related changes in retinal ganglion cells and was able to restore vision in a mouse model of glaucoma.

Recently, transient reprogramming in vitro has been shown to reverse multiple aspects of human fibroblast and chondrocyte aging.

Nonetheless, the epigenetic reversal of senescence achieved by previous transient reprogramming methods was modest (about 3 years) compared to the dramatic reduction achieved by full iPSC reprogramming.